Throughout the play squealer is responsible for bringing about changes on animal farm after jones is expelled. In this essay I’m going to explain why.

In the extract, squealer is trying to convince the animals that the pigs are doing everything for the animals and for the farm. The pigs are taking all the privileges on the farm for themselves. Squealer threatens the animals by saying ‘do you know what would happen if we pigs failed in our duty?

Don't use plagiarized sources. Get your custom essay on
“ Animal farm essay on squealer ”
Get custom paper
NEW! smart matching with writer

He will do the thinking for them. The animals defineately don’t want mr jones back and squealer scares the animals into thinking that they’re doing all they can to prevent jones coming back. He uses this to control the animals.

Squealer tries the convince the animals that they are sacrificial in what they do and by eating the milk and apples they arnt a privelege but its a ‘hardship’.

‘You do not imagine. I hope we pigs are doing the selfishness and privilege?’- he tells lies and convinces the animals that this is the way it should be. He’s responsible for the change on animal farm as he tells the animals what napoleon told him to and because the animals are so gullible they just believe him. He exploits the animals in jones’ return.

When he is first introduced he was a ‘brilliant talker’. The animals said he could ‘turn black into white’ meaning he makes bad things look good. His importance is clearly suggested. His introduction to the fable is longer than snowballs or napoleons.

Squealer is napoleons henchman and will ensure that napoleon becomes more unapproachable and secure. His leadership presented is as ‘sacrifices ‘, ‘extra labour’ not a ‘pleasure’ but a ‘deep and heavy reasonsibility.’

After napoleons announcement, squealer made a round of the farm and set the animal’s ‘mind rest.’ His confidence ‘assured them’, persuading them to doubt their own memories asking ‘have you and record…’ And ‘is it written?’ When the pigs move into the farmhouse, squealer persuades by what seems ‘logical’ arguments. The pigs who were ‘the brains’ are justified, they deserve priveleges as squealer agues.

When boxer dies the animals are very sad and squealer uses euphemistic termonology ‘readjustment’ rather that ‘reduction’. This is a deliberate and effective distortion of the truth. The animals were glad to believe squealer as it was the easiest things to do so. Squealer is full of mock sympathy and uses it as an oppurtunity to praise napoleon and suggests his case for boxer. 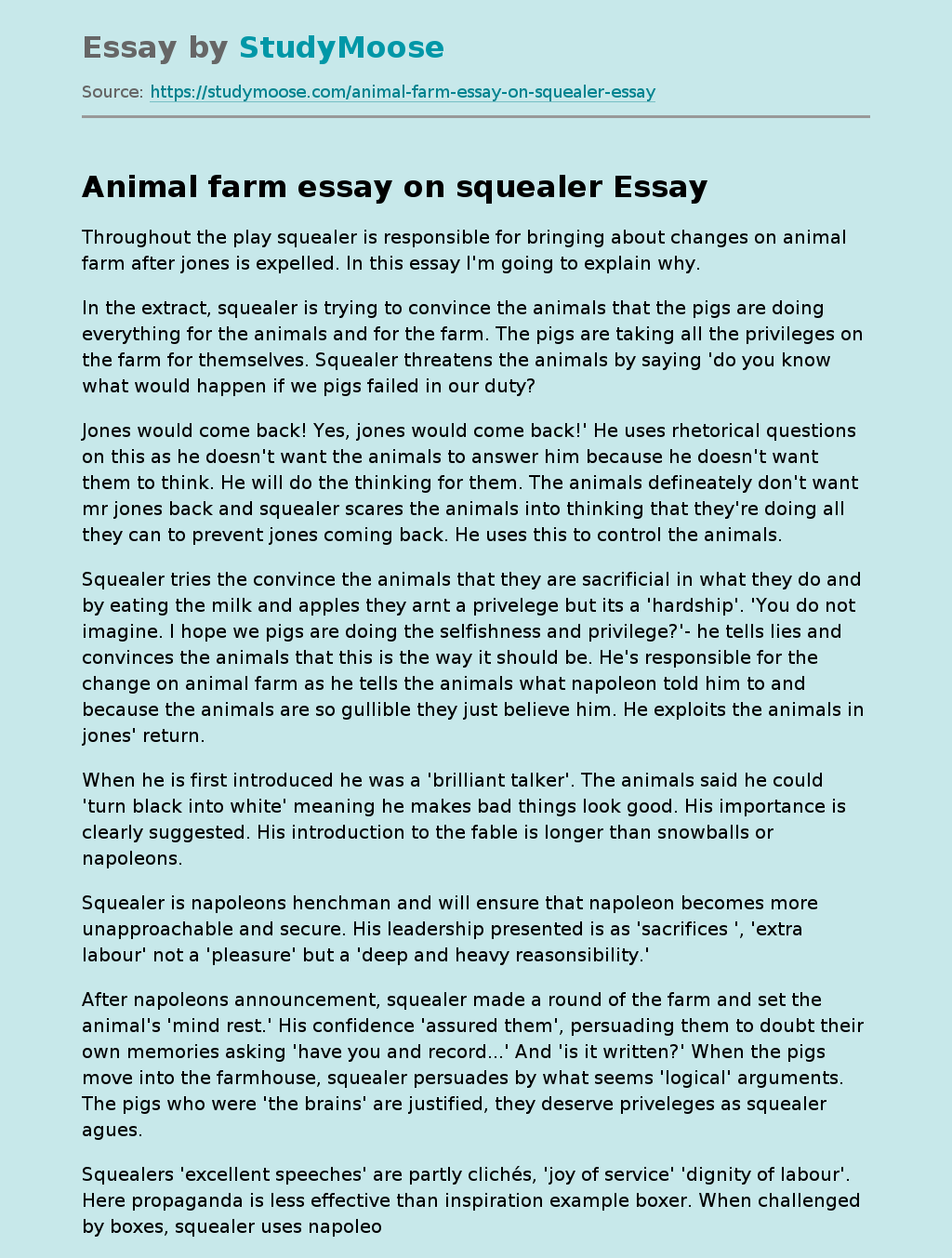