Lone Survivor was written by Marcus Luttrell shortly after his service as a Navy SEAL in Afghanistan. With help from Patrick Robinson, Luttrell was able to write this very detailed account of how he overcame one of the most daunting situations in his career as a Navy Seal.

The book begins with Luttrell describing his childhood in Eastern Texas, explaining how he looked up to his veteran father and was always willing to work hard. Pushed by his Father and older brother Morgan, he grew up to become Navy Seal.

Luttrell describes the training he had to go through in order to become a SEAL and the strength it took him to finish the BUDS(Basic Underwater Demolition) course, one of the toughest six months of his life. During that process he saw many people quit and decided that he would not be like them. Once he graduated as Navy SEAL, he went one various missions and was successful, Until the night of June 27th 2005 where he faced the most difficult mission of all.

He was sent on a mission with four of his most trusted seals, Danny Dietz, Michael Murphy and Matthew Axelson. There mission was known as opperation Red Wing, and it was to capture or kill a taliban leader associated with Osama bin laden. They were to find high cover within the mountains and try to shoot him from a far range. On the mountainous terrain they encountered difficulty trying to find a good angle to shoot this wanted man.

They had to stay longer than expected and encountered a trio of goat herders that were under age and from the village they had under target. They had two options. To let them

escape, knowing they will go back to the village and send an army of warriors to their location, or to kill them which could have been morally incorrect. They decided to let them go and try to escape the mountains before they were surrounded. Soon enough they were quickly surrounded by eighty men. They had minimal cover and no access to the base where they had come from. They had to fight back in the most valiant way in order to survive. They fought for hours against heavy artillery in the rocky terrain. Soon enough Luttrell had to see his friends take hits and eventually die one by one, giving there lives up for the sake of there “brothers”. Completely alone and badly injured, Luttrell had to hide in order to survive this attack. Eventually Luttrell was helped by a man named Gulab, who lived in a village down the mountainside. This Afghan man risked his life helping Luttrell because the Taliban wanted to kill Luttrell and would do anything to take him from that village. The book ends with the other SEALs rescuing him from the village and killing the Taliban fighters that had surrounded the village.

The Characters in this book are Danny Dietz, Michael Murphy Matthew Axelson and of course Marcus Luttrell. These three brave men risk everything to do the moral thing and let a couple of kids escape. Danny Dietz was “A little reserved, but underneath he could be very funny and was a sweet natured person”(p182). Michael Murphy was recognized by Luttrell as a trustworthy man who could get the job done. Mathew Axelson was a strong hard working man who always had his back. These three men fought valiantly against all odds, eventually giving up their lives for the US.

I don’t relate to any of these characters who risked there lives in a valiant and courageous effort to try to save the lives of their fellow soldiers. They are also Navy SEALS, which is the hardest military position you can be. It takes strength, will power, dedication and years or

training in order to be a Navy SEAL. I also respected their decision making when choosing what to do with the goat herders they encountered.

The book’s theme is that sometimes you regret the important choices you make in life. This is best seen in Luttrells writing

“I looked at Mickey right in the eye, and said, “We got to let em go” It was the stupidest most southern-fried, lame brained, decision I have ever made in my life. I must have been out of mind mind. I had actually cast a vote which I knew could sign our death warrant.”(p206). The book shows how one mans decision can alter the course of his life and can either cause him to regret it like in the case of Marcus Luttrell or continue a regular life.

I liked that this book was written from the eyewitness perspective. This was because the battle between the taliban fighters and Navy SEALs was very descriptive and even a bit gruesome. This detail was interesting to read about, learning about the dangers of war and what brave people actually have to go through for this country. I didn’t like the fact that in the end the choice he made, ended up killing his fellow soldiers. It must be tough for Lattrell going through that guilt every day. I would recommend this book because its action packed and shows the detailed story of how one man survived so much trials and pain. 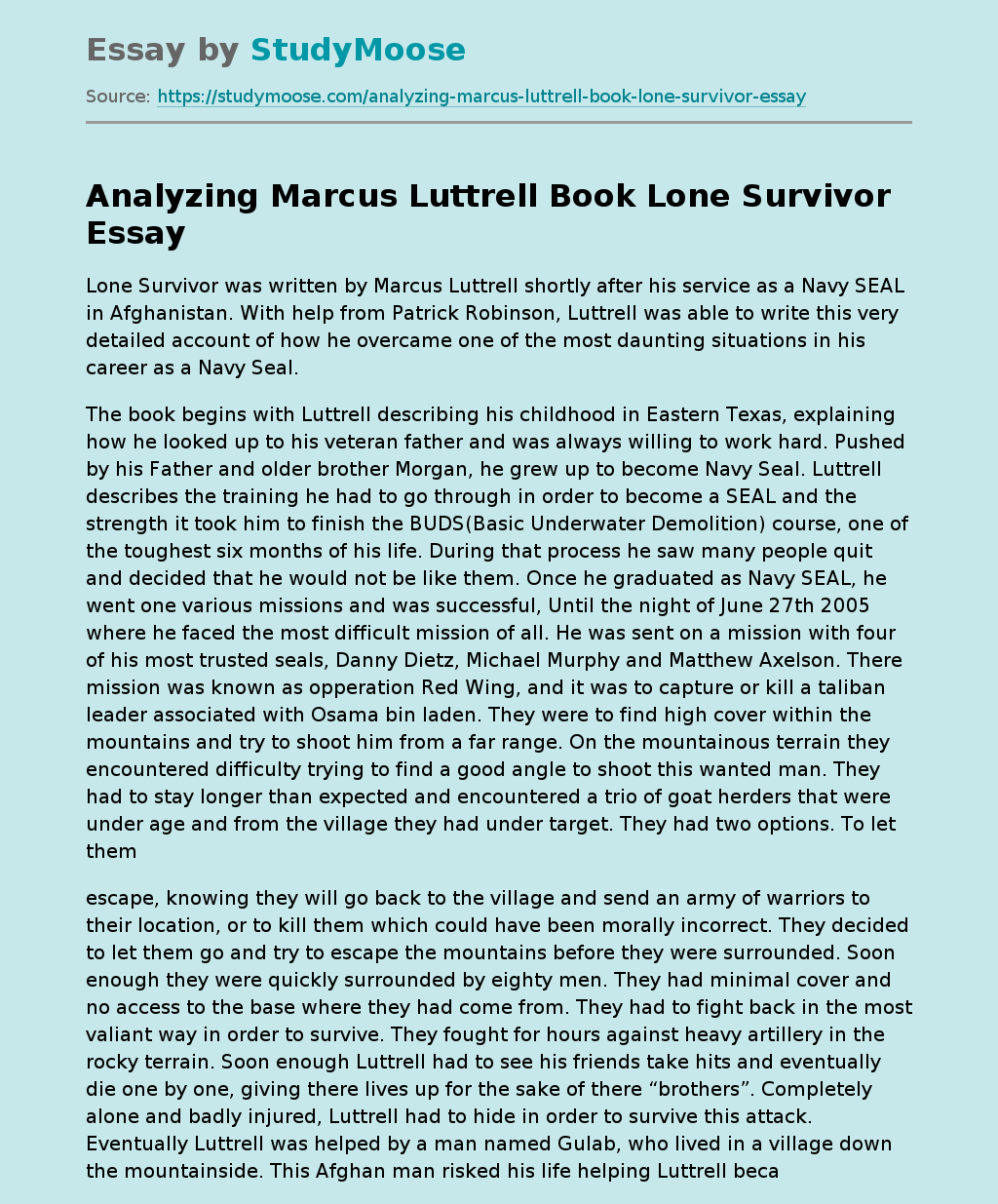