Routine activity theory is a sub-field of rational choice[->0] and criminology[->1], developed by Marcus Felson[->2] and Lawrence E. Cohen[->3]. Routine activity theory says that crime[->4] is normal and depends on the opportunities available. If a target is not protected enough, and if the reward is worth it, crime will happen. Crime does not need hardened offenders, super-predators, convicted felons or wicked people. Crime just needs an opportunity. The basic premise of routine activity theory is that most crimes are petty theft[->5] and unreported to the police[->6].

Don't use plagiarized sources. Get your custom essay on
“ Routine Activity Theory by Marcus Felson ”
Get custom paper
NEW! smart matching with writer

Crime is neither spectacular nor dramatic.

It is mundane and happens all the time. Another premise is that crime is relatively unaffected by social causes such as poverty[->7], inequality[->8], unemployment[->9]. For instance, after World War II[->10], the economy of Western countries was booming and the Welfare states were expanding. During that time, crime rose significantly.

According to Felson and Cohen, this is because the prosperity of contemporary society offers so much opportunities of crime: there is much more to steal. Routine activity theory can also help explain the dramatic rise in crime during the 1960s.

Due to the increase in female participation in the labor market, the homes are left without a capable guardian as adult caretakers at home during the day decreased. Furthermore, rapid growth of suburbs and the decline of more traditional neighborhood, led to the decline of informal controls that would have once existed with a tightly-knit neighborhood.

Lastly, with the baby-boom generation[->11] coming of age in the 1960s to the 1980s, it amounted to an excessive number of motivated offenders and crime rate predictable increased in a similar manner.

With such changes in the nuclear family, more and more youths were lacking supervision, especially when both parents worked outside the home; the number of temptations increased for youth to commit crimes. [1] Routine activity theory is controversial among sociologists who believe in the social causes of crime. But several types of crime are very well explained by routine activity theory including copyright infringement[->12], related to peer-to-peer file sharing[->13], employee theft[->14], and corporate crime[->15].

For crime to be committed, three aspects are needed: 1) A Motivated Offender 2) A Suitable Target 3) The Lack of a Capable Guardian Lack of a capable guardian can range to anything that would make a suitable target easier to victimize. From a person walking alone, to a poor police presence, to anyone else who would deter a motivated offender from offending in that circumstance. It should be noted that the guardian does not have to be a person at all, nor does the suitable target; there are many examples of objects and environmental designs that act as a guardians or security measures to deter motivated offenders as well.

This branches into the realm of CPTED[->16] (crime prevention through environmental design) where seemingly small measures like the addition of lights, fences, better locks, open or visible areas and security cameras act as the capable guardian and can prevent crime against a suitable target, in this case a building, park or other areas. [1] Furthermore, crimes rate if generally proportional to the number of motivated offenders, such as teenagers and unemployed people, in the population. Of course, motivation can be lowered when legitimate means are available for offenders to achieve their goals.

Motivation can increase, when the option of crime is the only viable choice available for an offender to achieve their goals. Another deterrence that influences the routine activities that produces crime is the moral beliefs and socialization of the offender. If a person has been socialized to hold conventional beliefs, even in the presence of criminal opportunities, offenders would refrain from crime. Such is the strength of social bonds that serve as a buffer to counteract the lure of criminal activities.

A criticism of routine activity theory states that opportunities to commit crime by youth do not generally lead to a crime committed when the parental controls are missing. Also suggesting that routine activity fails to ignore other theories in relation to the causes of crime, such associal learning theory[->17]. Another criticism of this theory says that even though opportunities for crime are high when both parents are involved in the workforce, crime can also be displaced to an area where there is low supervision by parents. Meaning regardless of situation, crime will still occur. 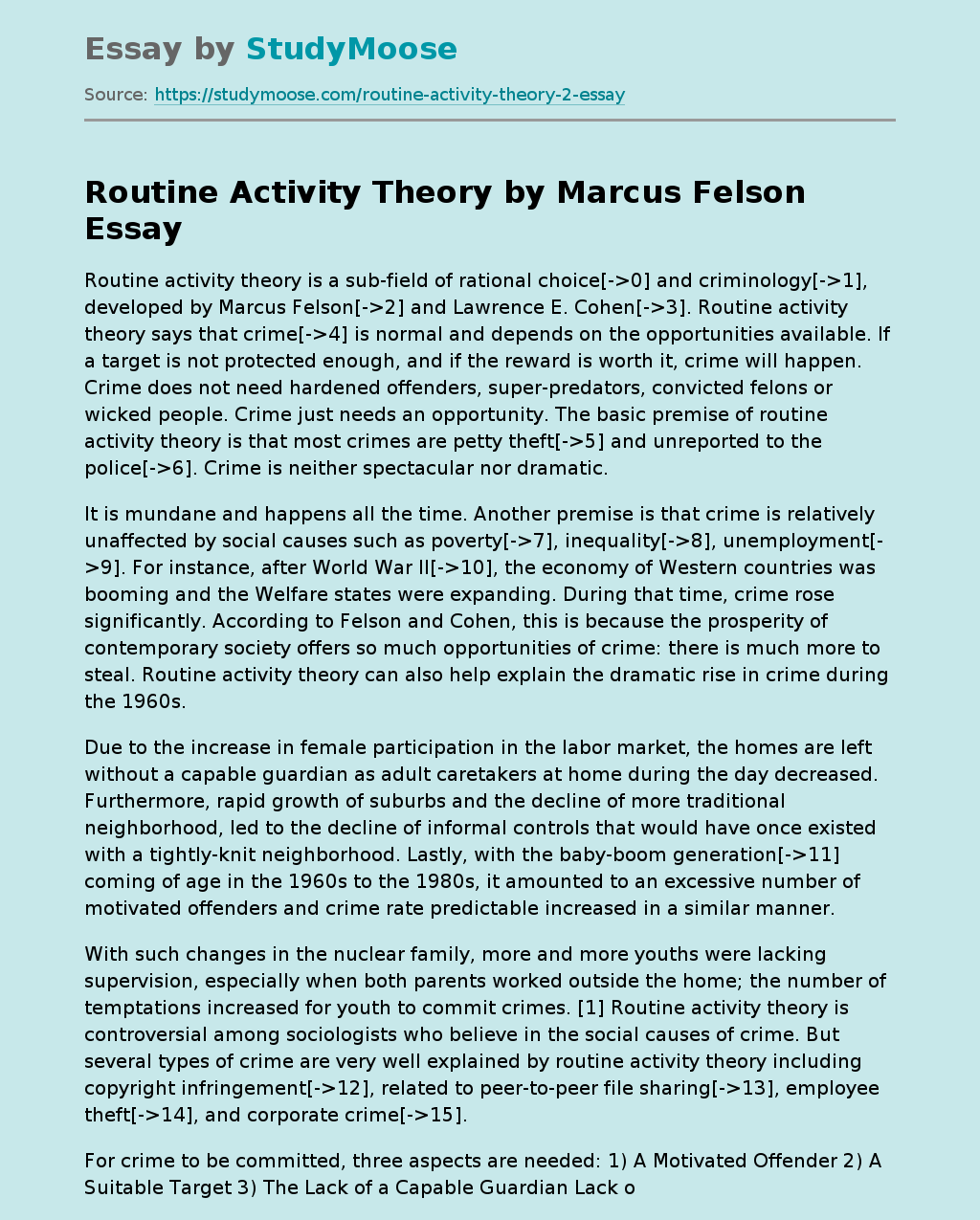