Pieces of world literature have many similarities and differences that exist due to the cultures and time periods or literary eras during which the books were written. In addition, the way the writer thinks and how he has lived his life will impact the treatment of these topics. The similarities in these books are generated because of themes that unite them, such as love, religion, trust, and friendship, which create the body of a story. Dostoyevsky and Voltaire are two authors of different eras who have chosen similar themes and motifs in their novels Crime and Punishment and Candide.

Don't use plagiarized sources. Get your custom essay on
“ Analysis of themes like suffering, religion and love in two different world literature novels ”
Get custom paper
NEW! smart matching with writer

The story of Crime and Punishment is based on a man who commits a murder and isolates himself because of his guilt. While Candide is a novel based on a man, who travels the world in search of his lost love. Suffering, love, and religion are the most common themes that these authors have presented in their works. Though the concepts are similar, they are portrayed using entirely different techniques and methods.

In Crime and Punishment characters suffer for a variety of reasons that arise from personal or social factors. The suffering creates dual personalities in them. Raskolnikov commits a murder of an old woman and the guilt makes him suffers from a state of delirium. He was not able to differentiate until the end of the novel. Raskolnikov also isolates himself because he is unable to trust the people surrounding him.

He rationalizes about the crime and thinks that he helped others:

The people who deserved the money of the old lady he killed. His crime left him desperate and alone, suffering until he redeemed his sins by confessing the crime. Moreover, many characters of Crime and Punishment suffered because of poverty. Katherine Ivanovna faced a lot of financial and social problems after the death of her first husband. Her second husband, Marmeladov, is jobless and cannot support their family.

He suffers from mental depression and is a drunkard. Katherine Ivanovna’s husband tortures her both mentally and emotionally, which irritates her already deadly disease. Furthermore, Katherine Ivanovna feels that she has already suffered a lot and that god should accept her just as she is and thus rejects to see a doctor. Other characters like Dunya, Raskolnikov’s sister, also suffers because of poverty. She works as a maid in a house where she never receives the respect she deserves. Sonya, Marmeladov’s daughter is another character in the novel that suffers from poverty. She sacrifices herself to fulfill the needs of her family. She becomes a prostitute by profession and therefore faces a lot of social segregation.

On the other hand, in Candide by Voltaire the characters suffer more physically then they do mentally. The suffering was caused by wars that were fought between kingdoms or by other earthly calamities. Candide, the main character, says, ” Life is nothing but illusions or calamities.” (Pg 94) Candide suffers from distress as he travels around the world in search of his love, Cunegonde. Other characters like the old woman and Paquette suffer from sexual slavery and rapes. Cunegonde also suffers from poverty and become a sexual slave. Pangloss, the teacher of Candide, and Martin, the companion of Candide, suffers from depression. In this novel all sufferings is meant to communicate the flaws in the philosophy of optimism to readers. This philosophy states that everything that happens in the world is the best of all possible worlds. This philosophy is presented throughout the book.

In addition, another important theme in these novels is the aspect of religion. In Crime and Punishment when Raskolnikov asks Sonya to read the story of Lazarus from the bible, she hesitates at first but then reads the whole story to him. By presenting such scenes in the novel Dostoyevsky is giving the readers the idea of man’s ego ultimately leading him to the path of god. Similarly, Sonya giving the cross to Raskolnikov when he was going to the police station in order to confess his crime is a symbol of redemption. Also read an at the Crossroads meaning

“Go to the crossroads, and first kiss the earth which you have defiled; then bow down to the whole world, to the four points of the compass because you have sinned against it, too, and say aloud for all men to hear: ” I have killed.”

When Raskolnikov remembers these words he performs them. It is the angel like personality of Sonya that makes Raskolnikov’s nature to start recognizing his sins Dostoyevsky presents the fundamental idea of Christianity. The idea is of atonement and redemption as the only solution to humanity is sins. In other words it’s the only way to turn towards god.

Likewise, Candide’s opinion about the creation of the universe is similar to Raskolnikov’s Jesus like personality. Candide thinks that god made the universe and then allowed man to run it according to his wishes .on the other hand; Raskolnikov commits the crime in order to help others. This reflects Jesus self-sacrifice for the sins of humanity. In Candide, Candide views the inquisitor’s actions of hanging and executing fellow citizens as inhuman. Voltaire portrays the lack of commitment church officials had towards religion. He shows how the church officials were jewel thieves; they had mistresses and were popular for having homosexual relations. The Jesuit barons were less incline to work for others and do charity. Instead they worked only for their own benefits.

Lastly, another theme to compare and contrast in these novels is love. Dostoyevsky has presented the theme of love in various forms. He showed the love one has for humanity by making Raskolnikov rationalize the idea of killing the old woman. Raskolnikov thinks that he commits the crime because of the love of humanity. He also thinks that he has the right as a superior man to give out justice. Furthermore, Sonya’s love makes Raskolnikov to accept his mistake and redeem his sins. Raskolnikov touches Sonya’s feet and kiss it in order to express his love for her. Dostoyevsky shows the strength of their love by making both Sonya and Raskolnikov develop compassion for each other. This in turn confirms the readers about the idea of love. Besides that Sonya turns into a prostitute and Dunya working in a place where she does not receive any respect shows both characters love for their families. Also by the end Dunya loved Razumikhin, Raskolnikov’s friend, because she appreciated his help towards her family.

Indeed, Dostoyevsky teaches a lesson to his readers by making them think that love can change people. Voltaire shows Candide’s love towards Cunegonde. Candide travels the world in search of his love and even after facing terrible situations his love for Cunegonde continues. Moreover, while Candide was traveling he goes to the land of Eldorado and collects the riches from there. He gives this money to the needy people he meets during his journey, but also is fooled by several others. This shows the similar love for humanity Candide has. The old woman in Candide loves Cunegonde and therefore sells her to prostitution because it is the only way to protect her. In the same way the old woman does various other things that are in Cunegonde’s best interest.

In conclusion, both the authors have presented these themes in a way that makes the reader completely engross in the novels. The themes of suffering, religion and love are though very broad, but these novels have presented them in a very concise and attractive way. Voltaire in Candide and Dostoyevsky in Crime and Punishment urge the reader’s to further explore the characters by presenting such themes. These novels can serve as great examples of stories for readers who are both interested in literature and language. As a matter of fact, a lot is common between these ideas. It is said that where faith is present love exists and thus one never suffers. The authors of the novel have proved this by their writings. 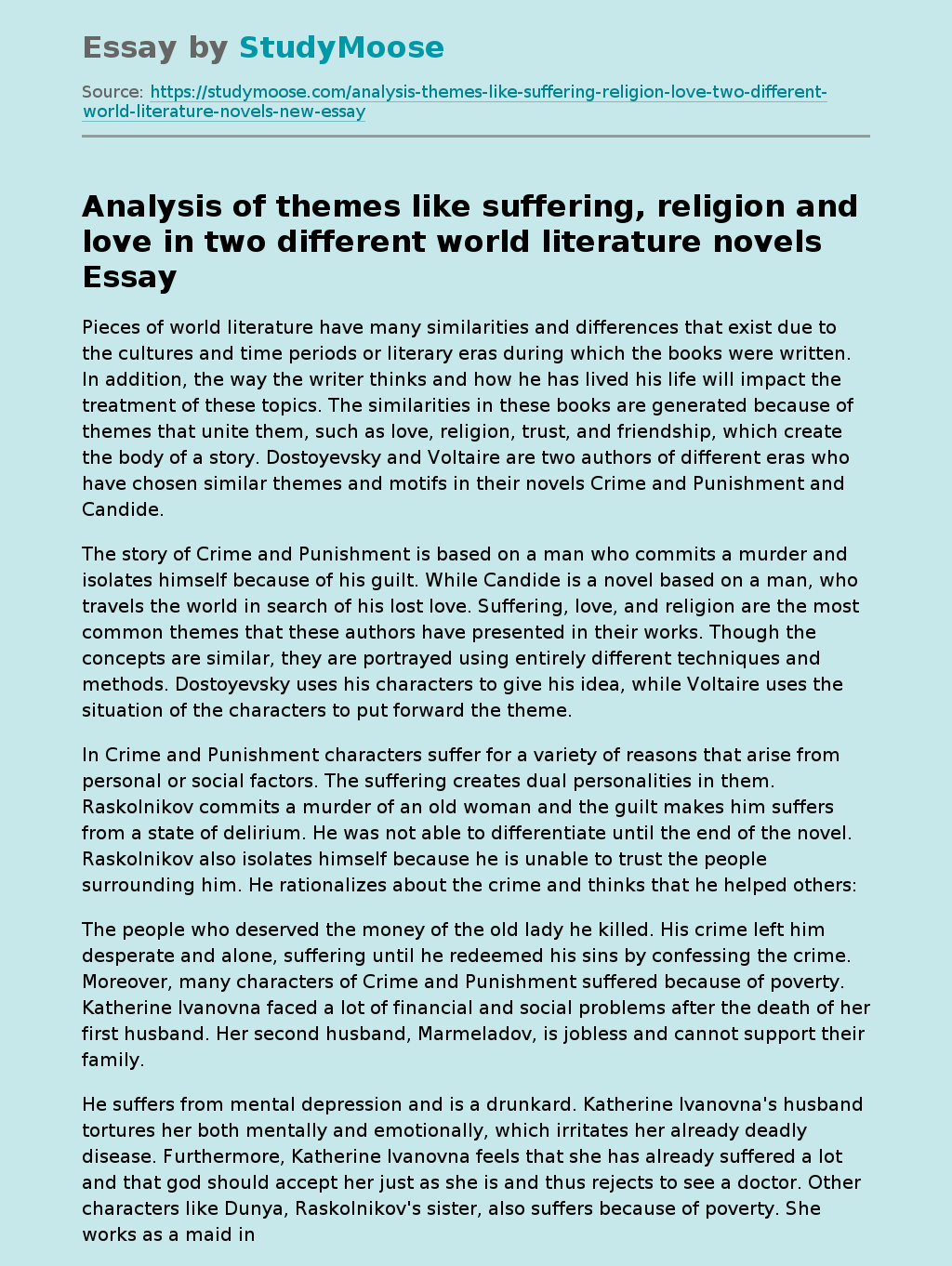