Analysis "The Things They Carried" by Tim O'Brien

Violent movies can transform a calm person’s personality to brutal. Likewise, the war has a similar effect, but a much more powerful impact. In the realistic fiction The Things They Carried, by Tim O’Brien, the author express how war can obliterate people’s innocence by telling the story of the transformation of Mary Anne. The story started with Mary’s boyfriend Mark, writing a letter to Mary, telling her to come to Vietnam so they can be together. When she just arrived at Vietnam, she was an attractive girl who has a pair of pleasant blue eyes, having beautiful long hairs, also with an approachable personality.

Don't use plagiarized sources. Get your custom essay on
“ Analysis “The Things They Carried” by Tim O’Brien ”
Get custom paper
NEW! smart matching with writer

She was sweet, too, that she likes to mooning with her boyfriend all day long. She seems to be a pretty, energetic girl. But later on, when she actually gets expose to the cruelty of war, with all these blood and casalities, she gets affected quickly. At the end, her eye color changes to shivery green, while also cutting off her long hair, and turns to a ruthless, violent killer who collects real human tongues and wears them as her necklace.

At first, Mary Anne was just like a normal American girl in the homefront, nice and simple. She had a terrific legs, a bubbly personality, a happy smile( O’brien 90). Every aspects of her creates a strong comparison to the war, all of her wonderful traits are differing her from the war either on her looks, mood, or personality, while her personality typically reveals her innocence and naive.

Because the word bubby implies her only seeing the positive side of everything, which also including the war, whereas war is where killing, conspiracy, where all the violents and ugliness happens. What furthermore display her naive is that different from the soldiers, who always stay alert of the surroundings, Mary would spend times with ARVNs in a lazy afternoon and learns many interesting skills, such as learning how to cook rice over a can of Sterno, how to eat with her hands(91). She stays unaware of a place where she could lose her life at anytime.

Instead she just interested in the culture of the local natives, simply want to have fun. When the story goes on, Mary Anne’s starts to lose her innocence. She used to be a limp girl that would not even dare to glance at blood, but now, When four casualties came in, Mary Anne wasn’t afraid to get her hands bloody(93). The intense atmosphere of war forces Mary to become serious and starts to deal with the bloody environment of war, while she has already seen way to much bloodshed and now becomes used to it. Not only feeling common about sanguinary scenes, she also starts to become more like a soldier, that: She stopped wearing jewelry, cut her hair short and wrapped it in a dark green bandanna(94). She starts to become realistic, that she starts to worry about the dangerous of the war while starts realizing that the flashy jewelry can not protect her. Instead she wears dark green bandanna that can disguise her in the mystical woods. She also wants look more seriously and get rid of the weak impression she left to others by cutting of her long hair.

The pretty and sweet Mary Anne people knew when she just arrived Vietnam now starts to disappear. Mary Anne keeps developing her brutalness during the war, and it finally comes to an extreme. The place she now lives is like an animal’s den, a mix of blood and scorched hair(105). The description of the environment where she lives analyze that she is no longer the neat and clean once she was, she now become ruthful and barbaric that she lives in a place where only barbarians would live. What more terryfying is, that now she has a necklace of human tongues on her neck(105). It indicates that now she is homicidal that slaughtering people becomes her daily basic, that the number of tongues of people she killed is already sufficient to make a necklace that can go around her neck. It also makes her personality twisted, that most people find necklace of human tongue appealing, while she wants to see it all the time, treating killing as a pride.

Mary Anne’s change was actually predicted by one soldier named Rat Kiley: A girl, that’s the only difference…I mean, when we first got here”all of us”we were real young and innocent, full of romantic bullshit, but we learned pretty damn quick. And so did Mary Anne”(93). Every single soldier was simple and naive when they first came to war, but later on they all get affected by the cruelty of war and lose their innocence, when they see bloodiness, or when they lose their best friend… Rat also states that the war affects everyone the same way, that Mary will not stay innocent just because she is a girl.

Although it is hard to believe, that a pretty, docile girl like Mary will also adopt the violence of the war, but at the end she makes her boyfriend stunned by changing to a dirty, violent killer: The way she looked, Mary Anne made you think about those girls back home, how clean and innocent they all are, how they’ll never understand any of this, not in a billion years(108). Mark never expects this dramatic change to his girlfriend, but now he should learn, that the lost of innocence of a person under the sensitive environment of welfare is unpreventable, no matter genders.

Analysis "The Things They Carried" by Tim O'Brien. (2019, Aug 20). Retrieved from https://studymoose.com/analysis-the-things-they-carried-by-tim-obrien-essay 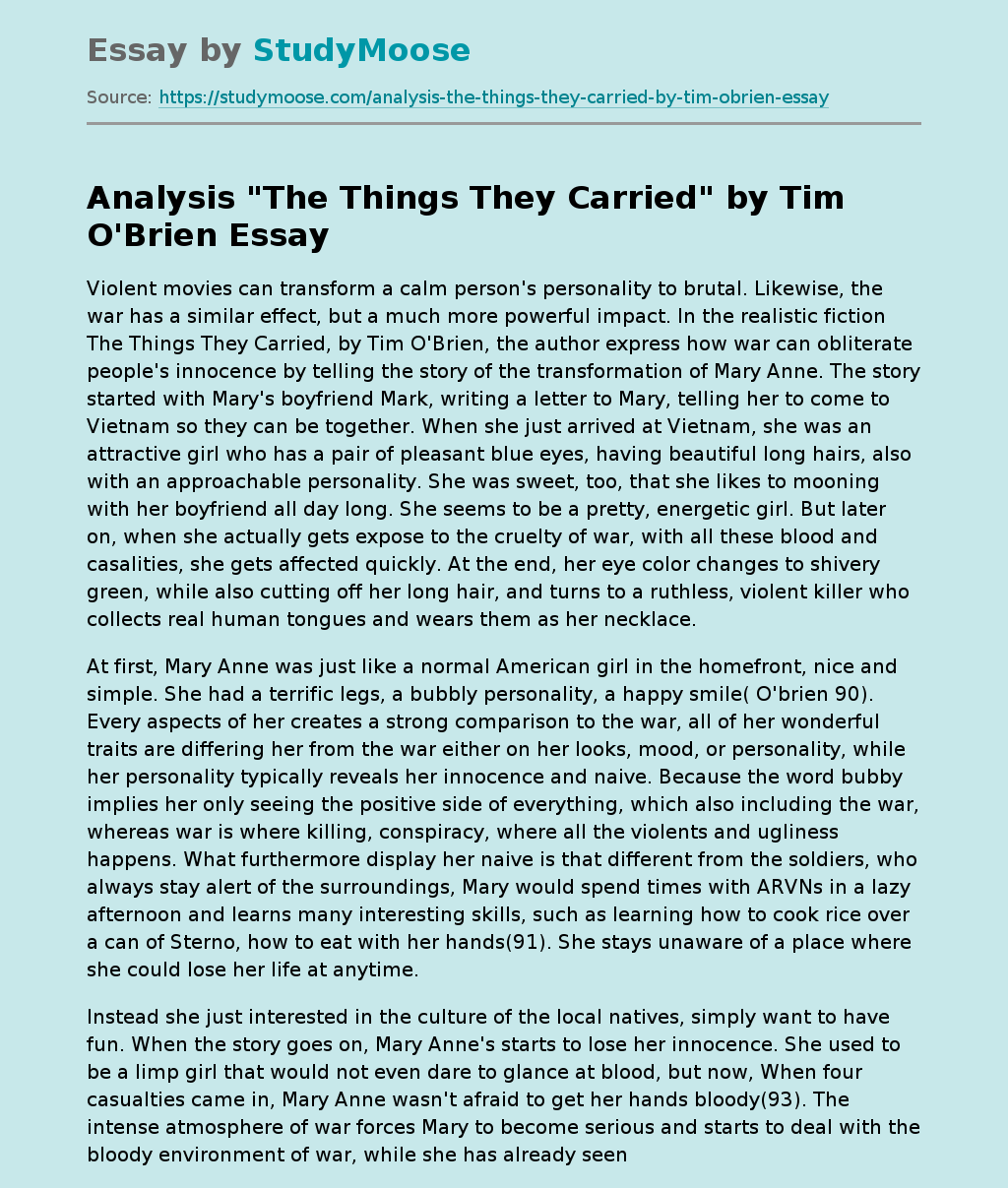