In the poem “ Sa Babaye Nga Naghubo Didto Sa Baybayon Sa Obong” , Renee Amper takes us to a scene on a beach through his eyes. It tells the emotional experience of the persona while looking at the girl naked. The writer uses rich imagery, symbolism and figures of speech to communicate the speaker’s emotional state, a metaphor he develops in a variety of ways to describe exactly how the persona in the poem is affected by the scene he is seeing.

The poem centers on a memorable visual image. It asks the readers to focus on and take in a striking sight, as of the persona in the poem ,“ nahitimbakuwas akong panan-aw” , which suggests the scene demands abrupt and continuous attention although the girl in the poem doesn’t want anyone to see her “… nagpanglingi ka kung wa bay naka-ambit sa imung pagpabaya”. If you let it, the central image will etched itself in the memory starting association activating thought and feeling.

On the first part of the poem, the readers are given the implication that the persona is in the act of voyeurism but on the later part he reveals a deep concern to his object of observation which is the girl ,“ kaayong ikinto sa balikhaw, kaayong isinggit paghinay!, kaayong ikapakapa sa hilom”.These lines also suggests that the persona is in a deep struggle or he is in a brawl of his own self to do or not to, but clearly he didn’t. Then the lines ”nagbingkil ang mga dahon, gitukmod sa lunhaw ang laya aron mutipon sa yuta; nasaag ang huyohoy” evokes dynamism and constant action making the scene alive in the readers mind.

The sudden gush of the wind destroys the tranquil observation of the persona impelling him to move as suggested by the lines “ miong-ong akong mga mata, ilawm sa gamot sa kahoy” , which also tells the readers that he clearly doesn’t want the girl to know his whereabouts. The lines “ madailos pagsamot ang imong patadyong , napasapasa ang imong kanindot”, suggest a constant action and that the scene of the girl removing her garments continues to unfold in the eyes of the persona. “ gisapnay ka sa mga balud” implies the girl is now swimming in the sea.

However, the poem does not stop there. The lines “ gihulad kang walay kaindig, sa mga tinguha sa daman ug damgo… gipasangil ko sa langit ang akong himaya” , describes the persona’s way of expressing his ineffable ecstasy of watching the enchanting unadulterated beauty of the girl . Moreover, “ taga “ on the last line of the poem act as a symbolic image for the deep emotion or feelings of the persona for the girl. The hook there is the emotional attachment that has developed in the persona towards the girl. As a reader, i was just mystefied with the nonchalant attitude of the girl. In the province, people most go to the baybayon most of the times even at dawn.

And in contrast with other sensuous interpretation, why can’t the persona be viewed as someone who appreciates the beauty of the girl and nothing else?And he was enchanted because of the beauty of the girl thus he developed an attraction to her . Nonetheless, the poem’s value and significance resonates in the readers frame of mind. How we interpret it, how it touches the core of our reason and values, how it activates thought and feelings. I commend the writer and as the girl etched in his memory, this poem has made quite an impression on me. The experience of reading the poem ends as follows 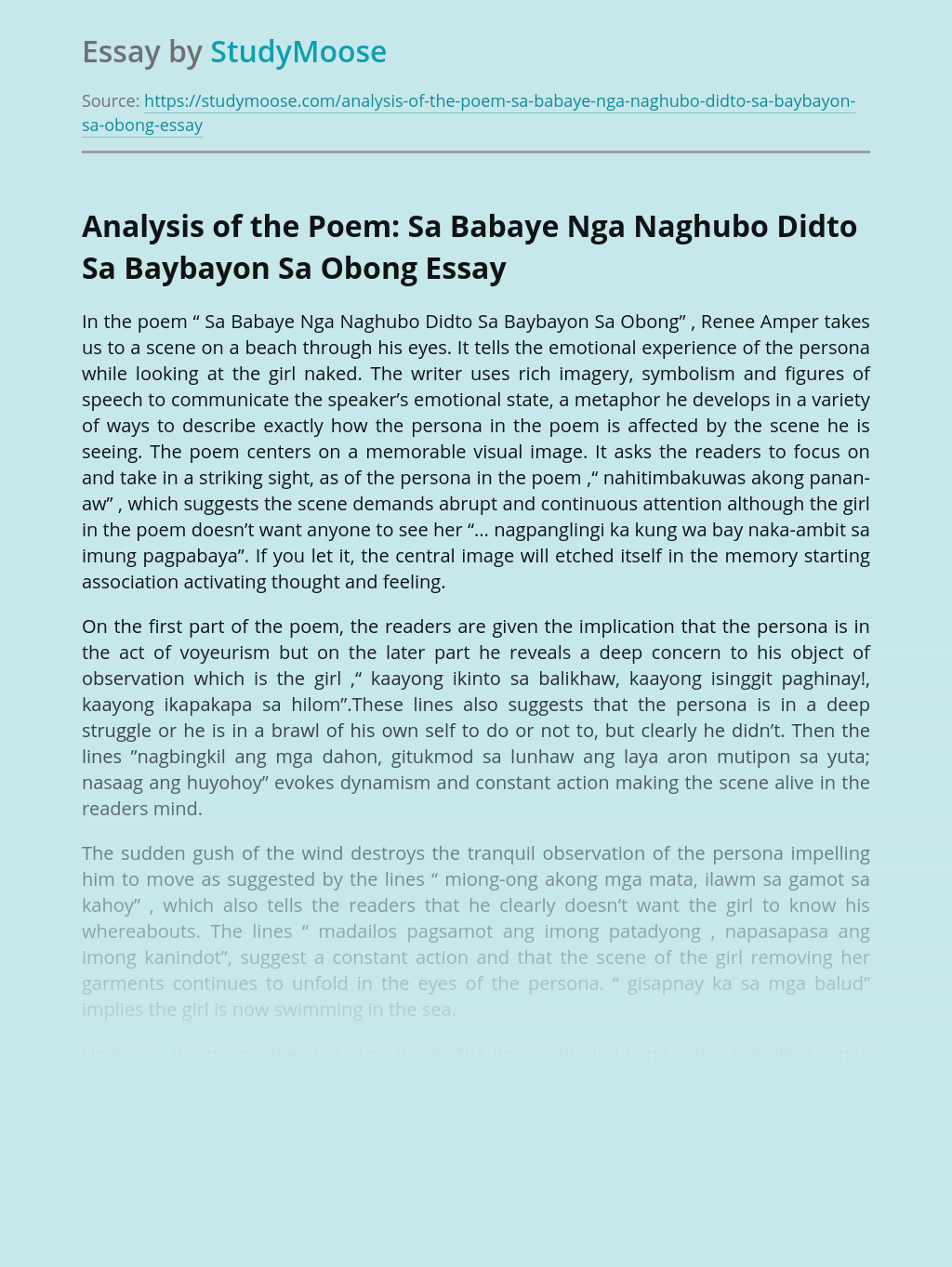 memory is a constructive and active process

Memory is a subject that has been of much interest to psychologists for many years and various research has been carried out in aid of trying to understand how memory works. It can be understood that memory is compromised of three processes and three key subsystems which enable it to work and perform efficiently on...

I declare that this assessment is my own work, based on my own individual research/study. I likewise declare that this evaluation, nor parts of it, has actually not been previously submitted for any other unit/module or course, which I have not copied in part or whole or otherwise plagiarised the work of another trainee and/or...

Managers can use humor and give their employees small tokens of appreciation for work well done. Also, when leaders themselves are in good moods, group members are more positive, and as a result they cooperate more. 127 Finally, selecting positive team members can have a contagion effect because positive moods transmit from team member to...

View sample
Effects on students having relationship while studying

“A true relationship is someone who accepts your past, supports your present, loves you and encourages your future.” This research discusses about the effects on students having a relationship or affair to opposite sex while studying. It will figure out many effects that may lead to a positive or negative outcome that is useful to the students themselves. Definition of a Reltionship According to the Merriam Webster...