Mary Shelley, in her work, Frankenstein, explores power and how one’s desire for authority influences the foundation in which a relationship is based. Through dedication and with the intent to gain a level of dominance over another being, Victor Frankenstein goes against the “true nature of God” (McConnell 1) in order to create new life. Shelly explores power dynamics through the creation of Frankenstein’s monster providing a basis for their relationship, thus exploring the inequality that exists between these two individuals.

Don't use plagiarized sources. Get your custom essay on
“ Analysis of Novel “Frankenstein” by Mary Shelley ”
Get custom paper
NEW! smart matching with writer

Frankenstein’s desire for control over the situation influences his behaviour following the initial success of his experiment. He analyzes his set of circumstances, which subsequently leads to the feeling of uncertainty resulting in the abandonment of his creation altogether. This causes the monster to develop a sense of resentment towards his creator ultimately contributing to further conflict. At this point, both characters are driven by the same goal to gain control over one other. This is due to the vulnerability that they are experiencing as a result of each other’s actions.

Power. The ultimate goal above all else. But why does one sacrifice so much for something that has the potential to inflict harm upon so many? According to Sarah Newman, a psychologist specializing in the field of power dynamics, people who have a greater sense of control over another person essentially have the tendency to feel less pain. In turn, this causes the other individual, who may feel as if they hold little authority in relation to their partner to be vulnerable to attack, creating severe psychological pain.

(Newman 5). Humans are better suited to aim for influence over an outcome, this is opposed to striving for the control over something that one may and hold minimal jurisdiction. Shelley’s portrayal of Frankenstein allows the reader to gain a greater understanding of the vulnerability that he is facing as he begins to lose his influence over the monster’s actions and the situation itself. As a young adult, Frankenstein is forced to overcome many difficult challenges greatly influencing his personal development, which contributes to a lifelong struggle with insecurity. Following the death of his mother, he is obligated to push past his overwhelming feelings of grief, as there are “still duties which [he] ought to perform,”(Shelly 35) demonstrating his strong sense of determination. It is crucial that in a relationship that there is a balance in terms of initiative and dominance and that one allows their partner to act as themselves not “twist[ing] them to fit [their] own image”(Merton 7). Although Newman proclaims that people who hold control over others have a tendency to feel less pain, and Merton argues that those who desire power above all else are simply desperate to find a reflection of themselves within the other person, they both fail to acknowledge the fact that vulnerability plays a significant role in this dynamic and that the individual may feel insecure about their current situation influencing their behavioural patterns towards others.

Frankenstein portrays profound determination in his pursuit of power through his desire to gain a level of recognition amongst the scientific community. He emphasizes the fact that “wealth is an inferior object” (Shelly 32) implying that money is worthless, but recognition can lead to the ultimate form of control. Success is limited without the implementation of knowledge, however one must be driven in order to truly accomplish anything. Frankenstein is desperate to manipulate something as predominant as life, proving that he will stop at nothing to gain recognition and fame, but his constant desire for power and control over the monster himself establishes an unhealthy dynamic in their relationship. By failing to address each others needs, they both begin to suffer due to vulnerability and the absence of stability. Frankenstein improves his invention “for nearly two years, [with] the sole purpose of infusing life into an inanimate body” (Shelly 46). In spite of the fact that his invention is not faultless, he demonstrates a strong sense determination in his desire to obtain power through the need to improve it his initial experiment, wanting to prove to the people around him that he is worth something. Although Frankenstein might object that he wasn’t in fact working with the intention of achieving great power, it becomes evident as the story advances that he is derived from his desire to stand above all else.

Mary Shelley, in her gothic novel Frankenstein, explores the different types of power as a way of outlining the characters intentions. Frankenstein explores his objectives by contrasting the differences between influence over willpower present within a relationship and how it contributes to the existing dynamic between two individuals. This becomes evident when he chooses to bring life to an inanimate body thus allowing himself to obtain control over another being and creating an unbalanced dynamic between one another. Following his creation, the Monster utilizes books as a way of learning and obtaining the knowledge that he needs, then choosing to use the power within himself to destroy Frankenstein and the people he loves as a way of retaliation. He has advanced in terms of intellectual capability and was exercising it in the form of physical dominance by acting out in a way that applies his new knowledge against those who had lead him to feel vulnerable in the first place. The monster is suffering from being “alone and miserable,” (Shelly 171) causing some to believe that he is struggling from the lack of companionship and love triggering poor choices in terms of behavioural capability. Although one may have made the choice to act out against the other, these instances were imposed on by the individual causing the consequences to carry a certain level of severity. Power is gained through the ability to control others “desired outcomes” (Johnson 6), people lack power when their goals and needs are dependent on their actions and the actions of others. The characters exploit different types of power as a way of gaining dominance over one another, and as a result of the actions taken while under the influence of anger, this creates a poor basis in which their relationship is situated, contributing to further conflict and discontent.

As a way of analyzing the unhealthy dynamics present amongst the characters in Mary Shelley’s Frankenstein, she prospects over the fact that one’s desire for authority has the power to influence the foundation in which a relationship is based. Individuals who are in possession of greater control in relation to their partner develop a tendency to experience less pain, causing the other person within the relationship to become vulnerable. Frankenstein is desperate to gain an adequate level of recognition amongst the scientific community, with the purpose of gaining control in his field, but by failing to address the needs of those around him and his constant desire to gain power over the monster, this establishes an unhealthy relationship contributing to further repercussions. Shelly explores different types of power as a way of outlining the characters intentions within the novel, contrasting the effects of physicality in relation to influence and how both characters utilize these types of power as an attempt to gain the ultimate form of control. 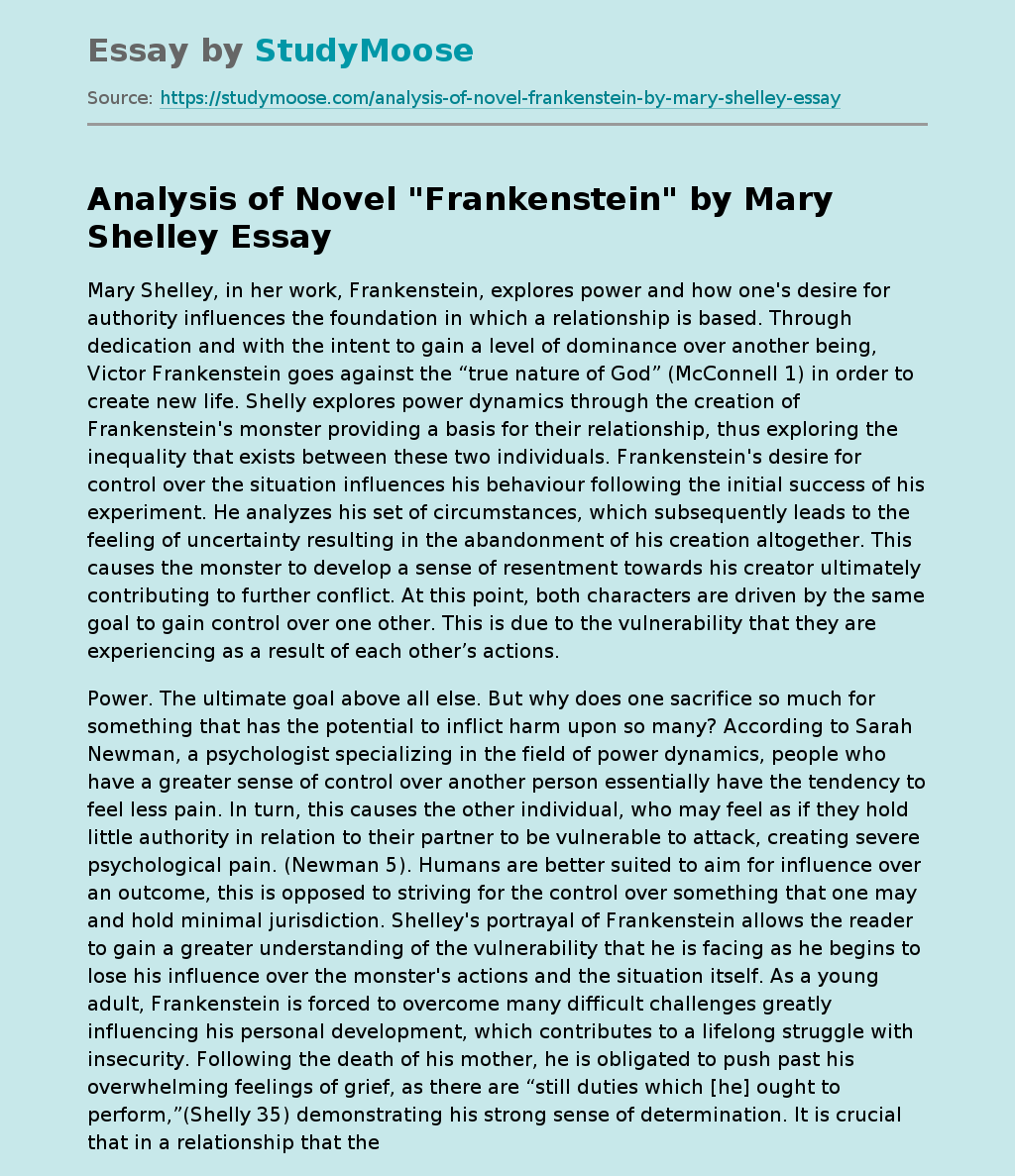