Kazuo Ishuguro’s novel, _Never Let Me Go_, brings us to a fictional England in the late 90s, where the disciplines of medicine and the bioengineering have developed to a degree that today’s scientists could only dream of. Kathy, the narrator, matures throughout the book, going from a student, to a young lady finding her place in the world to embracing her fate and taking upon the role of a carer. From the beginning of the narrative, we are given the impression of her being a common, somewhat bewildered, but orderly teenage student: she doesn’t rebel or think about escaping.

Don't use plagiarized sources. Get your custom essay on
“ Analysis of Kazuo Ishiguro’s “Never Let Me Go” ”
Get custom paper
NEW! smart matching with writer

Her seemingly linear and routine-filled life changes as the reader gets to know the Hailsham students and their role as clones, created for the purpose of first becoming carers and then donors. Kathy’s method of storytelling provides the reader with an eerie, but touching guide through this nightmarish scenario.

Throughout the novel Kathy tells us her story in a first person point of view, while glancing over her past, skipping between timeframes and events.

A notable element of Ishiguro’s construction of Kathy, as a narrator, is her memory loss and unpredictable mood, which often gives the reader the experience of prodding through some living creature’s thoughts: “I crept away along the path, and for the next day or so kept dreading what Miss Emily would say when she saw me. But she never mentioned it at all. But that’s not really what I want to talk about just now.

What I want to do now is get a few things down about Ruth…” The time jumping, her unsteady mood and her memory loss create a puzzle, a sense of confusion, which lends itself to be put together by the reader.

From a quote “We all know it. We’re modelled from trash. Junkies, prostitutes, winos, tramps. Convicts, maybe, just so long as they aren’t psychos. That’s what we come from. We all know it, so why don’t we say it?” We can see their vexation towards their existence, what creates a stronger effect of empathy between the readers and the characters. Due to the fact that the characters get to know about their “planned” future “None of you will go to America, none of you will be film stars. And none of you will be working in supermarkets as I heard some of you planning the other day. Your lives are set out for you”, their fear about the future intensifies, which really adds tension to the plot. Their remaining hope for getting deferrals however keeps up their motivation to never let go.

As their life in Hailsham is largely built up on rumours “…there were rumours almost every day…” Ishiguro used epiphany to give a powerful ending to the novel: Tommy’s and Kathy’s realization of the deferrals being untrue. Now when this is done, they still have no means of escape: most likely caused by teachers’ manipulation where they heavily promoted obedience, “You have to accept that sometimes that’s how things happen in this world.”

In general we cannot distinguish them clones from us humans. They have the exact appearance and also ability to love, as we do. As throughout the book Ishiguro used rather depressed/sad tone on the lives of clones, a message reaches the readers that our rapidly progressive technology may lead to actual human cloning, but from a novel like this we should learn that we should not abuse human rights even for the use of science. 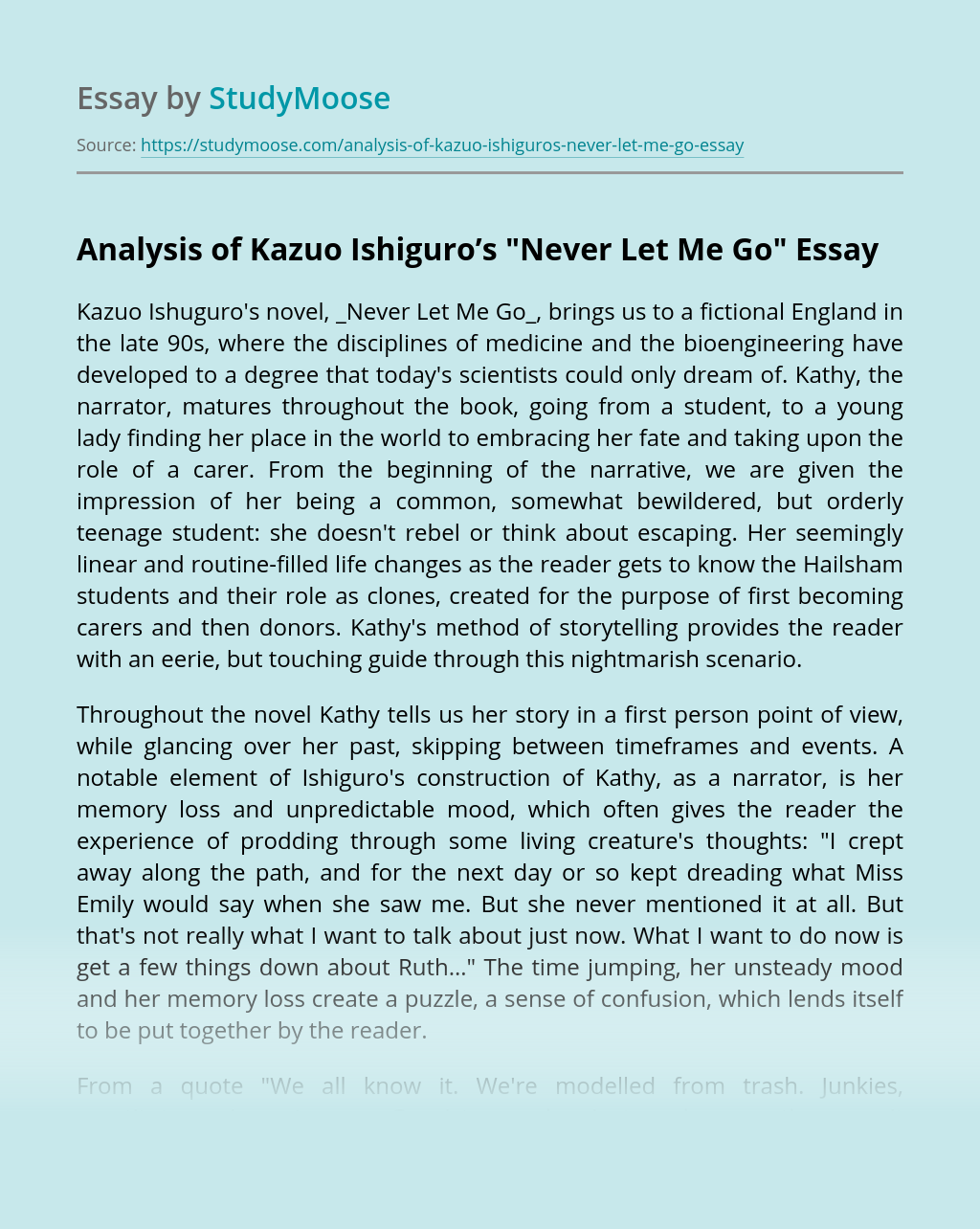