Content: Jean Kilbourne’s content use was very imagery based which is a very effective technique in persuasive speech. It is very apparent in her video that she does an extensive amount of research, and that she is extremely passionate about the content that goes into her videos. Kilbourne is a master when it comes to displaying images and information in a certain light to support her theories. Her entire thesis is based on a very feministic stand point and whether or not you necessarily agree with what she is saying it is hard to argue her point because she presents her points and ideas so well.

Don't use plagiarized sources. Get your custom essay on
“ Analysis of Jean Kilbourne’s Speech on Alcohol ”
Get custom paper
NEW! smart matching with writer

The speech and direction used in her video is easy for all types of people to understand. Whether female or male she gets her point across and explains her ideas with solid proof. Kilbourne’s information and ideas are not the most original that I have ever seen but they are very unique in the sense that she appeals to every sex, race, and religion.

Kilbourne is very well spoken and articulate and this helps her case as it only shows women in a very professional and educated light.

She overwhelms her audience with an abundance of evidence and examples that are shown in the exact light that she needs for them for completely back her opinions and points of interest. Kilbourne’s supporting materials are in all of the content that she presents. She gives specific examples of every point that she makes with imagery, statistic and quotes from legitimate sources.

Thoroughness is one of her strong points as well. Her examples are not only supportive or her ideas but, they directly relate to how she almost manipulates the viewer by showing us why she is right and how this is affecting women on a regular basis.

Organization: Killing Us Softly was one of the most organized persuasive videos that I have ever seen. Although I did not fully agree with a lot of what her video was about I had to respect it because of just how well it was presented. During the introduction she gave her audience a very clear and thorough interpretation of what we were about to watch, and what her main concept and ideas that she was trying to get across were. She wastes very little time jumping right into examples of the message she is trying to get across. Kilbourne shows the audience countless examples over and over in an order hat may seem random to some but actually is very organized. She starts off with a strong example to set the tone and then gradually moves onto less extreme examples to show the varying levels of negative light being shown on women in advertising. Kilbourne’s main points are also very organized and clear. Almost like a check list as she went along showing the many different types of negativity towards women in not only certain types of advertising but of all types across the board. Kilbourne shows just how enormous the advertising world is.

It is a multimillion dollar industry that preys on intimidation and manipulation of women and their role in society. She exploits the very abundant and differing levels of exploitation of women in ads ranging from magazines, television, radio, billboards, and etcetera. Kilbourne’s conclusion was very strong and to the point. She showed a very funny but accurate commercial that shows men “acting” like women asking “Do I look fat in this? ” or saying their hips are too big, that they have their mothers fat legs, “I will not let my dress size determine my self worth”; it ends saying “Men don’t obsess about these things, why do we? This is a very strong point to her conclusion because it shows how strong of an influence the media has on women and society as a whole. Delivery: Kilbourne’s entire speech comes across very confident and delivers her speech with conviction and authority. She is very passionate about her work and ideas and it seeps through in her video. Along with her numerous examples her very educated and clearly researched ideas are very evident during her speech. Kilbourne comes across extremely enthusiastic and energetic. Just by watching the way she performs her speech you know that she is very emotionally invested in her work and ideas.

It rubs off on her audience because instead of just being perceived as “bitching” or “moaning” she is very thorough and accurate with her information. Even though a lot of it may be perceived my opinion by most she is so enthusiastic you can’t help but to really take a deep look and thought into what she is arguing. It is hard to judge Kilbourne’s eye contact and voice because we did not see her speech live, but from how she viewed the camera and the way that she presented herself it leads you to believe that she would be the same if not better in person.

Like I stated before she comes across well educated and she is very articulate which compliments her arguments because she is a good poster-woman for all women. Kilbourne showed an abundant amount of visual aids and examples which in my opinion is what really made her speech. And as I stated before I don’t necessarily agree with everything she presented it is hard not to be moved by her speech because of how influential and well done it was. 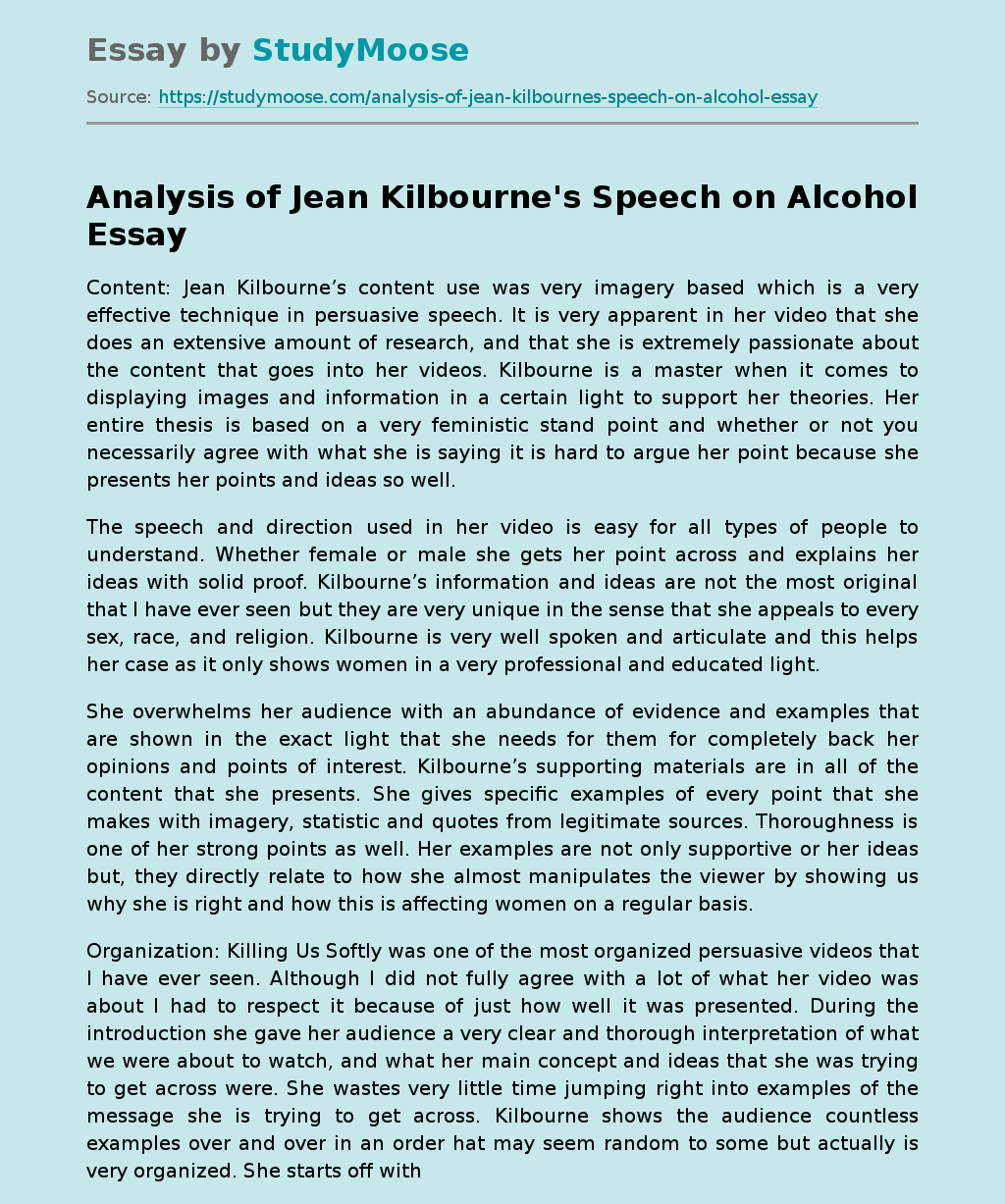