Analysis and Questions for the poem Daddy

1. Discuss the poet’s use of apostrophe in its direct address to the father figure. How does Plath stage that address as a kind of declaration of independence in the decisive tone with which she at once judges and dismisses the father? The poem Daddy, written by Sylvia Plath, is a text which reveals to the reader, the nature of the persona’s relationship with her father as well as the impact that her father’s death had on her.

Being a confessional poem, the reader can assume that it is about Plath herself.

The purpose of this poem is so that Plath can purge herself of her emotions as she feels abandoned by her father after his death. The very title gives away the fact that Plath’s emotional growth has been stunted and that she feels like an abandoned child. Throughout the poem, Plath uses many stylistic devices. She is successful in creating a tone of hatred, disgust, and finality.

Relationships with men were not her strong point by any means, and Plath’s negative attitude towards men is clear. One of her stylistic devices is the use of apostrophe.

An apostrophe in a poem is a group of words that are spoken to a person who is absent or imaginary, or to an object or abstract idea. In the poem, the speaker’s use of apostrophe illustrates an attitude of power. Apostrophe is the next best thing to talking directly to the father, which is impossible, as he is dead.

The speaker has conquered her fears, she was able to kill the father inside of her, and an ultimate demonstration of power is the ability to address someone directly, without having to hide behind the cloak of a method other than the second person. In the last lines, the apostrophe gives more power to the poem. “Daddy, daddy, you bastard,” has more effect on the audience than, “Daddy was a bastard.”

2. Consider how the poet’s sing-song rhyme pattern of the opening stanza darkly invokes a childhood world of Mother Goose rhymes appropriate to the poet’s regression back into the role of daughter to the dead patriarch. The structure of the poem is similar to that of a nursery rhyme, which reveals Plath’s child mentality. An analysis of the straight rhyme scheme lulls the reader into a hypnotic state and the language is relatively free from the kind of ominous and dark imagery and terms that will arrive as the poem by Sylvia Plath progresses. This nursery rhyme’s innocence is obliterated quickly with each and with the images and language of Nazism and several weighty references to horrible wars. The first stanza writes: You do not do, you do not do

Any more, black shoe
In which I have lived like a foot
For thirty years, poor and white,

In this stanza, the poem starts with the speaker declaring that she will no longer put up with the black shoe she’s lived in, poor and scared, for thirty years. She uses the second person throughout the poem, saying “you,” who, as we find out, is “Daddy.” This means that she is comparing her father to a shoe that she has been living in very unhappily, however, she is not going to put up with it anymore. This stanza reminds the reader of a nursery rhyme – the old woman who lived in a shoe. The repetition of “you do not do” in the first line even makes this stanza sound a little singsong-y. But this is no happy nursery rhyme – the speaker is poor, and won’t dare to breathe or sneeze, meaning that she feels trapped and scared.

3. How does Plath capture the ambiguity of her relation to the dead patriarch in her pun on the word through in the last lines of the poem? The poem reaches its crescendo with the line “Daddy, daddy, you bastard, I’m through”. The speaker has threatened that she’s through with her father before, in line 68. But the repetition of the word “Daddy” here, the addition of the word “bastard,” and the phrase “I’m through” makes this condemnation final. Before this, the speaker has used the word “Daddy” only four times in an 80-line poem, not counting the title.

Using this affectionate term for father twice in the last line makes it sound almost like she’s beating on his chest to get her point across. The use of the word “bastard” seems to be what this poem has worked itself up to. The speaker has tried out every way possible to criticize her father – he’s a Nazi, the devil, and a vampire. But, in the end, she just wanted to get out a good verbal punch, calling her father a bastard. Furthermore, in this line, the contrast brings to light the destructive conflict in the speaker’s mind, that of loving and hating her addressee simultaneously.

4. The poem draws an analogy between women’s oppression and that of the Jewish victims of the Nazi death camps. Do you think this analogy is appropriate? The themes prevalent in this poem are oppression and emancipation. The notion of oppression is evident when Plath uses the metaphors Nazi’ and Jew’ to describe her father and herself. This imago connotes that she is dependent on her father for survival as well as the fact that she is battling an internal war inside her and that she at this point, is a victim because of her father’s abandonment. Her mental suffering is further reinforced by the allusions to the Nazi concentration camps, as it reinforces the fact that she is a victim and that she is unable to escape from the psychological hold that her father has on her. This analogy does make sense in the poem however it is a very drastic and dramatic example.

Analysis and Questions for the poem Daddy. (2017, Mar 02). Retrieved from http://studymoose.com/analysis-and-questions-for-the-poem-daddy-essay 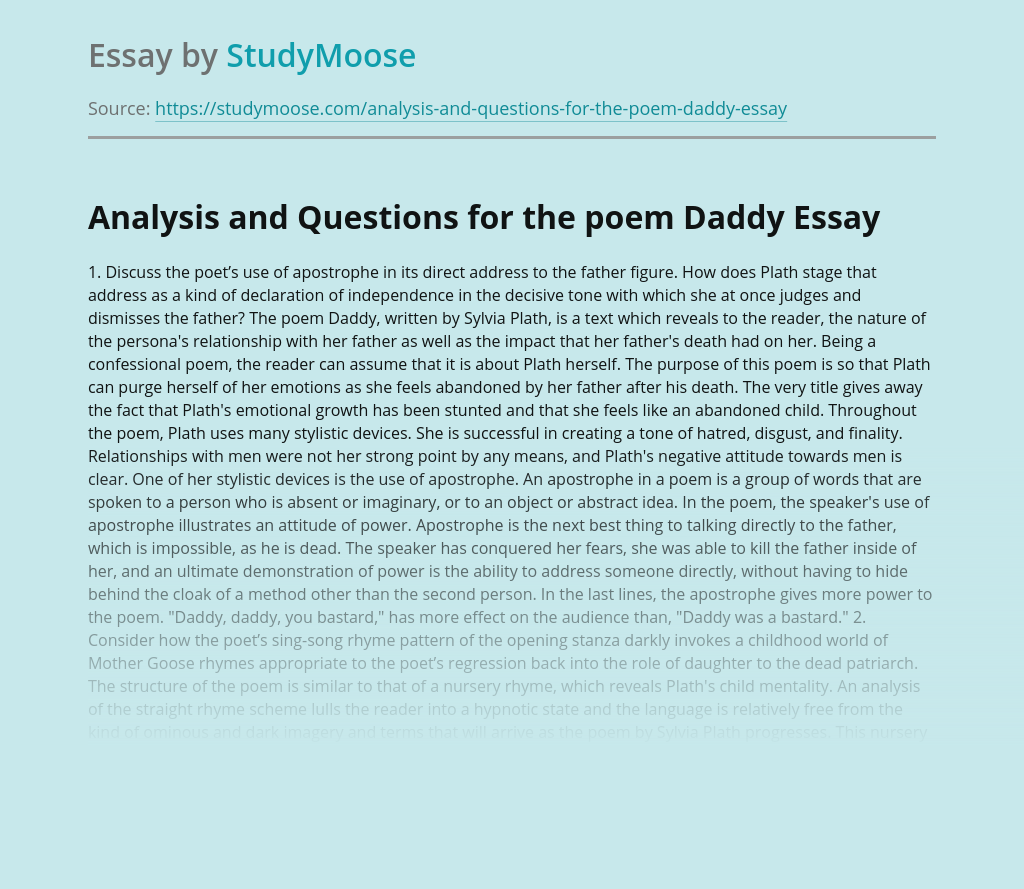 Don’t waste time
Get a verified expert to help you with Analysis and Questions for the poem Daddy
Hire verified expert
$35.80 for a 2-page paper
Stay Safe, Stay Original