The previous fragment we’ve read belongs to the work of John Locke, ‘Second Treatise of Civil Government’, who published it anonymously in 1689. It is a work of political philosophy, in which Locke talks about civil society, natural rights and separation of powers. Locke was one of the first empirical philosophers and he believed that the human being was born with no knowledge, and that experience and observation were the base of all human wisdom.

In the text, Locke talks about how powers should be separated and not concentrated in the same person (the King) because he would be tempted, and in fact it was happening, to use them just to satisfy his desires.

Don't use plagiarized sources. Get your custom essay on
“ Analysis and Historical Context from Second Treatise of Civil Government by John Locke ”
Get custom paper
NEW! smart matching with writer

Locke also says that individuals are under no obligation to obey one another, and that we are all born free. He continues talking about how a man has the power to do whatever it takes to preserve himself and others, but always obeying the law of nature.

People have the power to overthrow the king if he is not being just with his subjects; people have absolute right to choose a governor, and it should not be all about the ‘great chain of being’, a term Locke finds ridiculous because the governor should be elected by people and not by blood. An absolute monarch is illegitimate because we are all born equals. Locke says that there are three fundamental rights for a human being: life, liberty and property. These ideas were extremely dangerous because they despised the royal way of governing, and that’s the reason why Locke had to publish his work anonymously.

They meant a revolution in the mentalities of his time. Locke’s work had a tremendous influence upon the Founding Fathers. Locke’s idea of men being endowed with natural rights had an enormous influence upon the American Declaration of Independence; the rights there enumerated, “Life, Liberty and the Pursuit of Happiness”, were for Locke “Life, Liberty and Property”. For Locke, the Founding Fathers and for us, property is synonymous with the pursuit of happiness and liberty, and they wouldn’t be possible without property. This means that natural rights are intertwined and mutually dependent.

The loss of any one means the effective loss of the other two. A government that seeks to extort money from its citizens by overtaxing them is imposing upon the liberty of the people. This was the primary reason the Founding Fathers of this nation embarked upon the Revolutionary War. They understood that taxes imposed without the consent of the governed were indeed a grave imposition upon their liberty. Before Locke wrote his work, there had been many absolute monarchs in the throne of England like John in 1199 or James I in 1603, and later James II in 1685. Then, a civil war came during Charles I’s reign from 1642 till 1651.

The Civil War led to the trial and execution of Charles I in 1649, the exile of his son, Charles II, and replacement of English monarchy with a Republic ruled by Oliver Cromwell. The period called ‘the Protectorate’ may be said when Cromwell was installed as Lord Protector in 1653. From then until his death in 1658, he ruled in a state of conflict with parliaments. On May 1660, the parliament resolved that the government of England ‘ought to be by King, Lords and Commons’. A week later, Charles II was proclaimed king and before the month was out entered London in triumph.

Although Charles II’s reign produced the two rival factions, Whig and Tory, from which political parties were later to develop, they were almost identical twins. Each believed as firmly as the other in the maintenance of monarchy; each at different times adopted policies previously pursued by the other. The Restoration of 1660, by restoring crown, church and lords, put Englishmen back once more under a system of government proven unworkable. With a king on the throne who still wanted to govern, and a group of dissatisfied men in parliament who wanted his government to be controlled by them, conflict was hard to avoid.

But the civilian revolution did not happen until after Charles II’s death in 1685. King Charles was succeeded by his brother James, who became James II of England and VII of Scotland. James is best known for his belief in absolute monarchy and his attempts to create religious liberty for his subjects against the wishes of the English Parliament. Increasingly members of Britain’s political and religious elite opposed him as too pro-French, too pro-Catholic, and too much of an absolute monarch.

When he produced a Catholic heir, the tension exploded and leading nobles called on William III of Orange (his son-in-law and nephew) to land an invasion army from the Netherlands. James fled England (and thus abdicated) in the Glorious Revolution of 1688. He was replaced by William of Orange who became king as William III, ruling jointly with his wife (James’s daughter) Mary II. Thus William and Mary, both Protestants, became joint rulers in 1689. Parliament issued the Bill of Rights, which stipulated the rights and obligations of the monarch.

William and Mary reigned jointly till 1694 when Mary died. Then, William continued to reign alone. He died in 1702 and Queen Anne, the daughter of James II and the last Stuart monarch, succeeded William III. She, like Mary, was a Protestant. On May 1707, under the Acts of Union, England and Scotland were united as a single sovereign state, the Kingdom of Great Britain, though Scotland kept its legal system and also the Presbyterian Church. Anne became Great Britain’s first sovereign. All Anne’s children died so that her cousin, Sophia of Hanover was declared her heir.

However, Sophia died the same year as Queen Anne and so her son George of Hanover was the one in succeeding Queen Anne becoming George I of England. Basically, this text is a more specific critique of government, stressing the rule of the majority as the most practical choice for government. He identifies three elements necessary for a civil society: a common established law, a known and impartial body to give judgment, and the power to support such judgments. He calls for a government with different branches, including a strong legislature, and an active executive who does not outstrip the lawmakers in power.

Toward the end of the Treatise, Locke finally arrives at the question of forming a new government. When the state ceases to function for the people, it dissolve or is overthrown and may be replaced. When the government is dissolved, the people are free to reform the legislative to create a new civil state that works in their best interest. Locke insists that this system protects against random unrest and rebellion because it allows the people to change their legislative and laws without resorting to force. 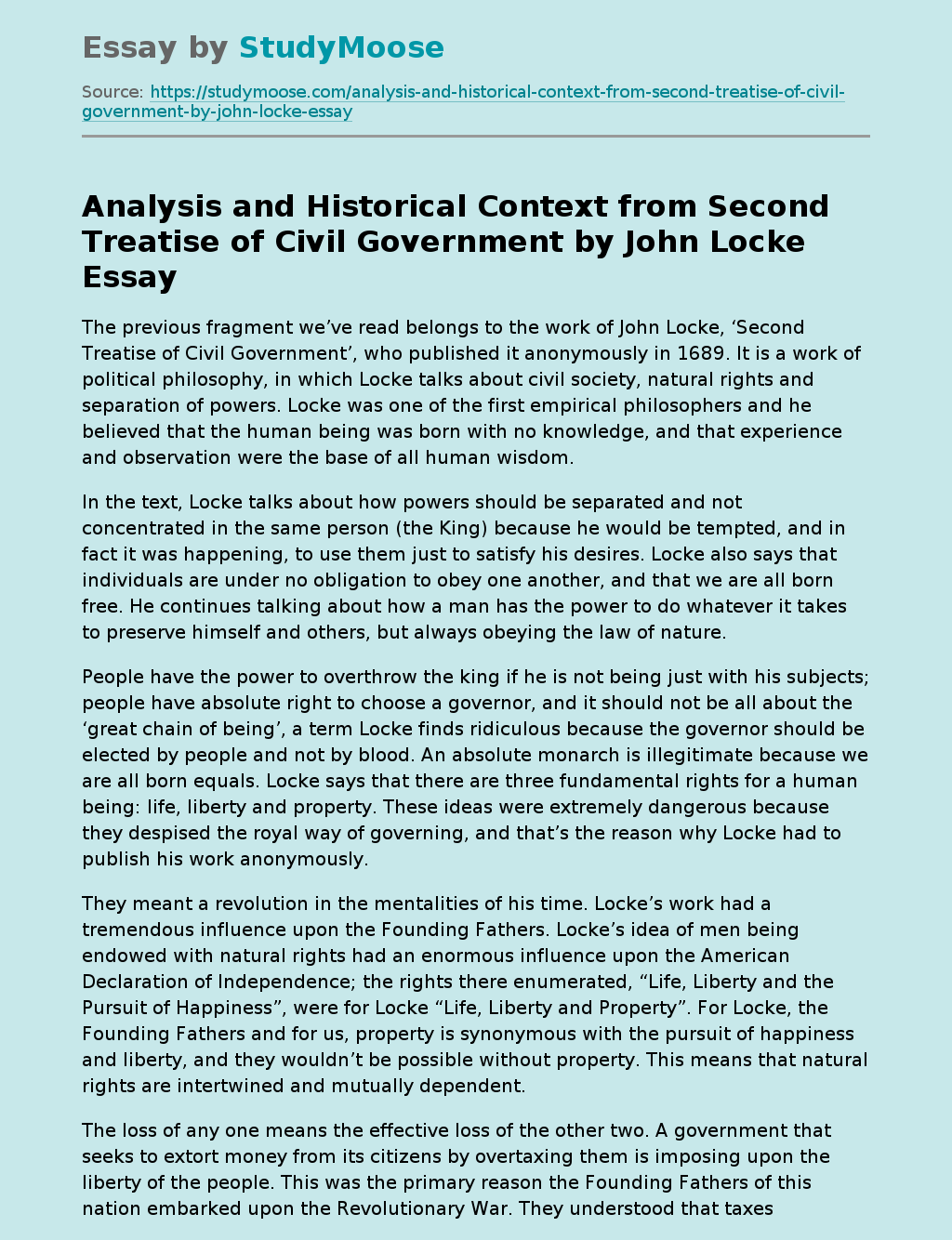