The novel Adventures of Huckleberry Finn by Mark Twain is about the adventures of a young boy named Huck who is running away from his father and his civilized life. Along the way, he runs into Jim, a runaway slave. Together, they travel down the Mississippi River and become friends along the way. Huck faces the dilemma of whether or not he should turn Jim in, or if he should help him continue to escape. This novel is controversial because of its use of the n-word.

Don't use plagiarized sources. Get your custom essay on
“ Analysis “Adventures of Huckleberry Finn” by Mark Twain ”
Get custom paper
NEW! smart matching with writer

During the 1800s, the n-word was used as a derogatory term for African-American. They were first called that when they were slaves, but after they were freed The New Jersey General Assembly wants school districts to stop teaching Adventures of Huckleberry Finn because of its racist language and themes. The New Jersey General Assembly should not ban the novel. Adventures of Huckleberry Finn should continue to be taught at New Jersey schools as a historical resource, and as a way to demonstrate racism and ways to hinder racism for future classes.

Twain’s Adventures of Huckleberry Finn provides a historically accurate representation of how slaves were treated in the 19th century. There was a divide between races and that is clearly shown in the novel. Adventures of Huckleberry Finn was written 20 years after slavery was abolished, yet it is delinated, in the novel, how whites treated the African Americans. An example that portrays this idea in the novel is, ‘here was a free n[ ] there from Ohio…They said he was a p’fessor in a college, and could talk all kinds of languages, and knowed everything.

And that ain’t the wust. They said he could vote when he was at home. Well, that let me out. Thinks I, what is the country a-coming to? It was ‘lection day, and I was just about to go and vote myself if I warn’t too drunk to get there; but when they told me there was a State in this country where they’d let that n[ ] vote, I drawed out. I says I’ll never vote agin ‘(Twain 28). This displays a factual part of history.

A poorly educated white man would talk down to an African American man who was well educated and also a free man. Even though they were equal in the eyes of the law, racism still existed which made the uneducated white man think he was superior to the educated black man. This is important for students to read first hand because it allows the student to visualize how the times were back then. The novel shows the reader how horrible racism is and how the n-word was used back in the 1800s. In the United States, “nigger” was first regarded as pejorative in the early 19th century. During the time of enslavement, the words “n[ ]” or “black” would be inserted in front of a common American first name, which would distinguish the slave from any local white person with the same name.

Keeping the book in the curriculum would support the idea of a student understanding the real meaning behind the n-word. In the 21st century, the n-word has been normalized through pop culture and the media. It is constantly used in songs and when teenages hear the n-word, it seems like any other curse word. Teenagers now-a-days have little to no understanding of the historical significance of that word. Some may even believe that it is a term of endearment, but most do not truly understand the origins of the n-word. Twain’s Adventures of Huckleberry Finn demonstrates how the n-word was used and shows the historical significance of that word. When a student reads Mark Twain’s novel, they can truly grasp the complex meaning of the n-word and how derogative and belittling the n-word is towards African Americans. 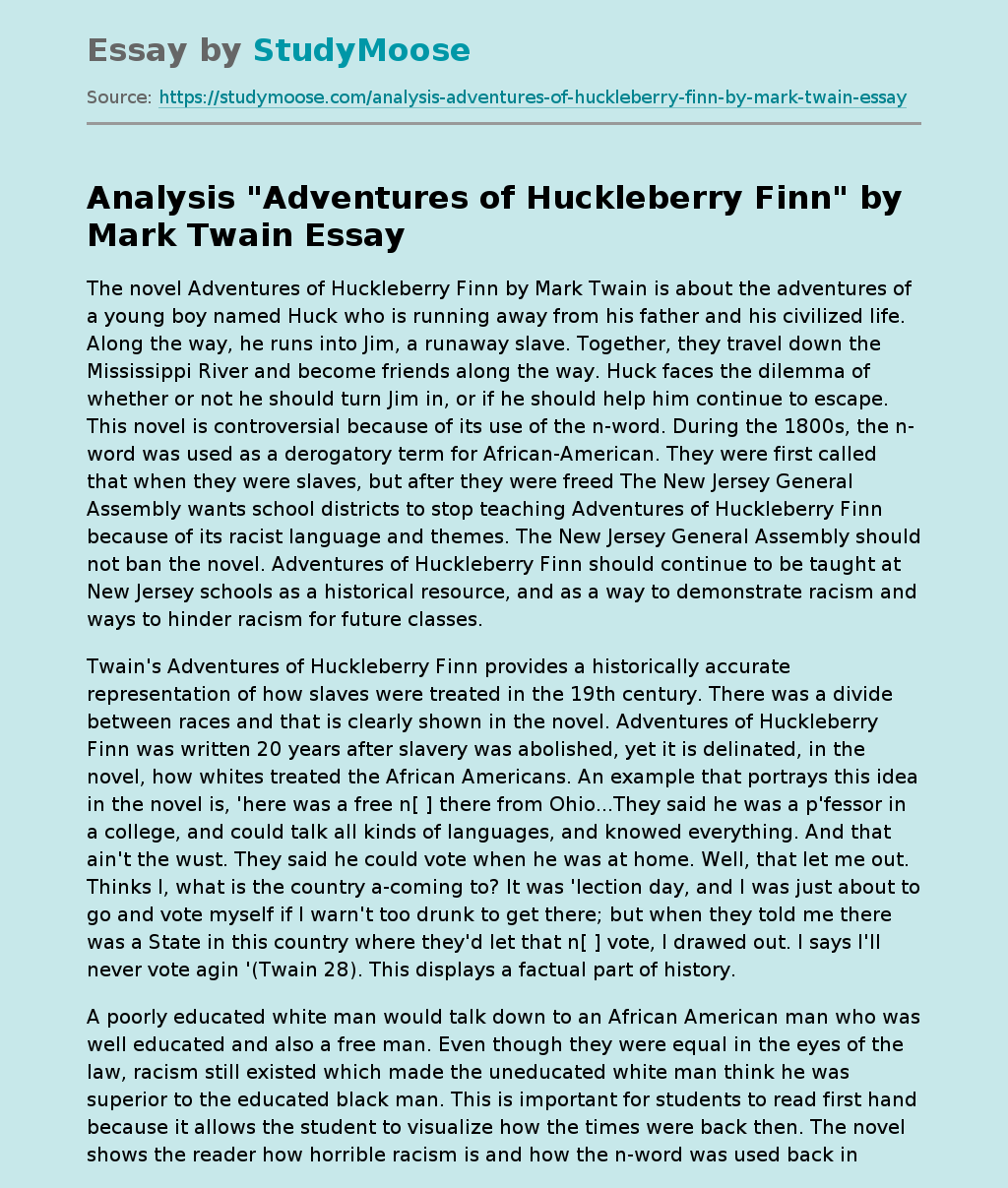