Ambition and Greed in Macbeth

The Concept of Ambition and greed has played a big role in Macbeth\’s Rise to the throne and Shakespeare starts with the witches’ prophecy of Macbeth who will become the king of Scotland. Ambition is described as eager for success and power; which is what Macbeth eagerly wanted. This ambition affects him greatly which makes him do actions such as to kill King Duncan, and later kill his beloved friend, Banquo. Lady Macbeth is also driven by this ambition and greed of power and she overrules Macbeth in order to make him the King.

Don't use plagiarized sources. Get your custom essay on
“ Ambition and Greed in Macbeth ”
Get custom paper
NEW! smart matching with writer

This ambition creates contrast in Macbeth’s character; He is seen as a noble hero at the beginning of the play but later he ends up being a tyrant. Shakespeare makes Macbeth the Dynamic character in the play. Macbeth is also unable to control his greed as he progresses with his murders. This shows that his ambition is overruling his actions; Macbeth simply needs more security for himself to retain the crown and to have “Sleepy nights”.

Shakespeare also shows how the ambition of a person can destroy many innocent lives and how his actions can torment himself.

This makes Macbeth curious and he starts to demand the witches for more details. This shows the initial greed he had towards this ambition and foreshadows his role in the play. This act of greed is shown in Act1, scene 3, pages 3 and 4. Shakespeare presents this ambition to the audience at the beginning of the play in order to create a contrast in Macbeth’s Character. Shakespeare also creates an irony in Macbeth’s loyalty towards Banquo. “Your children shall be kings… went I not so?” Macbeth says this after the witches’ prophecy and it indicates Macbeth’s loyalty towards Banquo; he is concerned about his children too. This is contrasted later in the play where Macbeth orders Banquo and his son to be killed. This also shows the first signs of selfishness towards his ambition.

Shakespeare emphasizes how eager Macbeth is of his ambition.” Two truths are told…theme”. Macbeth is convinced that the prophecy of the witches is true as he is awarded with the title of “Thane of Cawdor”. This shows his eagerness to achieve the third title as the King but later learns that he will have to kill the Duncan in order to be the King. The ambition and greed for this title is emphasized through the multiple thoughts and visions Macbeth has. Shakespeare also shows the first signs of going mad in this scene. These thoughts are described in long sentences to show the intensity of this ambition and how eager he wants the throne. The long sentences also show his weak mental strength he has. Shakespeare creates contrast in his character; he is physically strong and brave but he is mentally very weak.

Shakespeare shows Macbeth’s selfishness and his greed to retain the crown. This shows that Macbeth, as King, has put himself first before his country which is a contrast to what a king usually does. “What do you think about… have a chance to think about them”. This shows that Macbeth is deeply concerned about his security above his country’s and emphasizes the greed he had in order to retain his crown. Shakespeare uses this to describe that his ambition is totally controlling him and he is concerned about himself instead of the country.
Shakespeare uses the consequences of Macbeth’s ambition to describe his characteristics and his feelings after he had killed Duncan. “I can’t go back. I’m afraid… it again”, “Throw Physic to the dogs…. Thou of them” Shakespeare describes how Macbeth is continuously tormented by his actions. This shows that his ambition has caused him to be out of control. This is shown when Macbeth is talking to two people at the same time which shows that he cannot concentrate and is totally out of control. His ambition and his greed to retain the throne has caused him to have “Sleepless nights” and visions of people who he murdered (the ghost of Banquo). This is the guilt of his actions that made him achieve his ambition which didn’t make him comfortable and successful at all.

In the end, Macbeth sees no future for himself and is killed by Macduff, which shows that his ambition and greed to have more power and superiority over others had let to his downfall. Shakespeare has successfully shown how Macbeth’s characteristics change as he starts to follow his ambition and is seen as a totally different character at the end of the play.

Ambition and Greed in Macbeth. (2020, Sep 27). Retrieved from http://studymoose.com/ambition-and-greed-in-macbeth-essay 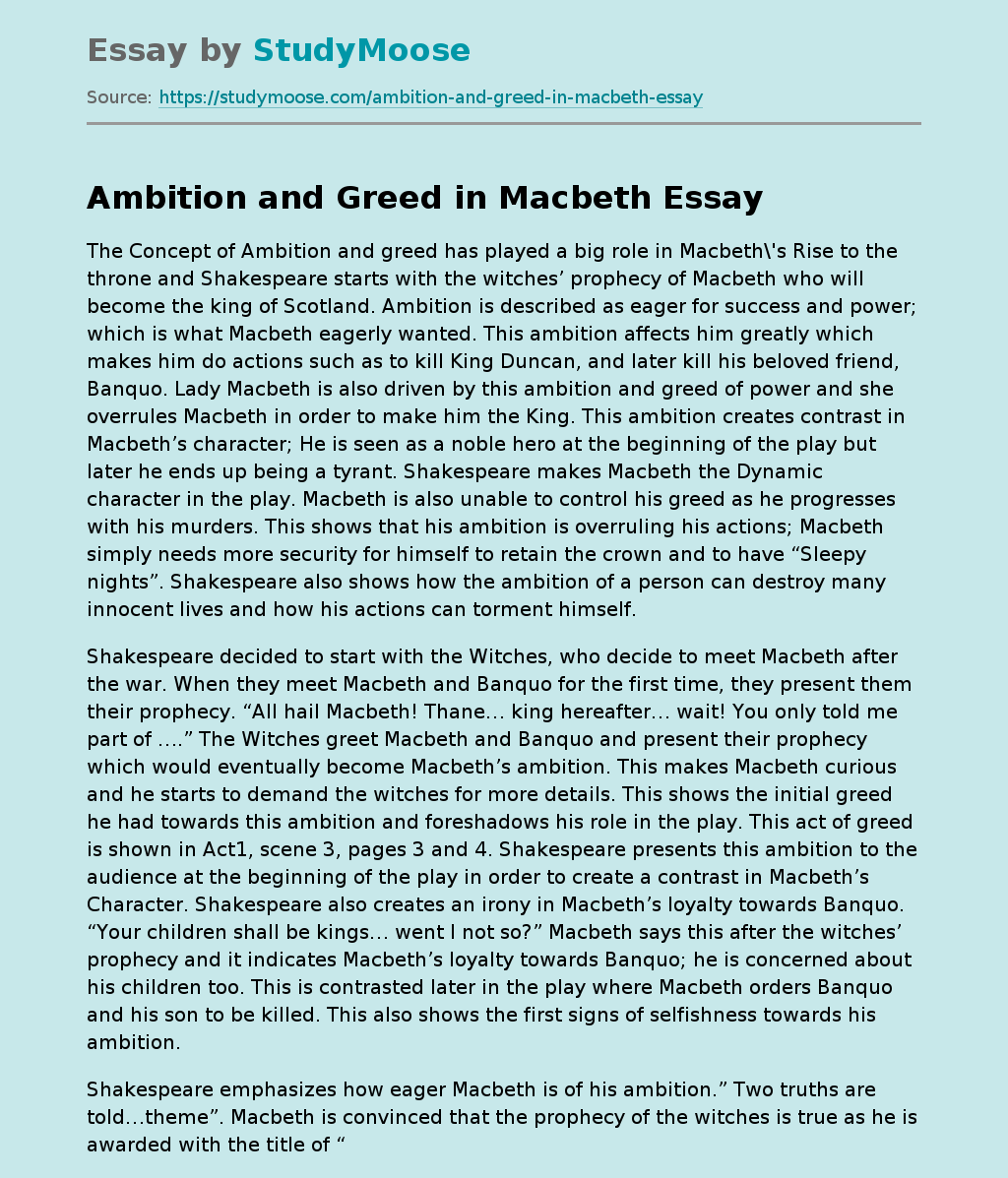