Amber is an 18 year old woman who has found she is feeling sick and unusual. She comes to find out that she is pregnant and consults her doctor. Being concerned of her student status and what her parents might think are her biggest fears. The fetus growing inside her is almost 11 weeks and has her own story from the inside. Mentioning all of the growth that has occurred and the development milestones she has reached, the fetus is concerned of her own well being.

The doctor offers Amber the options of abortion and adoption, and then the heart beat will be heard. It is unclear what Amber’s choice is in the end.

1. What are the hormonal and physical changes that occurred in Amber’s normal menstrual cycle before she became pregnant? Prior to Amber’s pregnancy she went through a normal ovarian cycle. It is stated throughout her story that she is very irregular with her cycle, most women do not have regular cycles until after three years since their first cycle (Marieb & Hoehn 2013) .

During the ovarian cycle which she went through to produce an egg, hormones are released through each stage of interaction to regulate the cycle. Gonadotropins are released via the anterior pituitary gland and luteinizing hormone (LH) and follicle-stimulating hormone (FSH) are secreted. These affect the release of estrogen which through constant feedback with the hypothalamus and pituitary gland, a follicle matures waiting to be fertilized. During this process bursts of different hormones during the ovarian cycle can cause abdominal pain known as mittelschmerz, German for “middle pain” (Marieb & Hoehn 2013).

If it is notfertilized it continues into the menstrual cycle, but since Amber became pregnant the fertilized embryo implanted itself into the uterine wall.

2. Apparently Amber did not use a birth control method. If she had, what options did she have and how do the various methods work. Amber had many options of birth control. There is only one preventative measure with 100% fail proof ratings and this is abstinence. If two consenting individuals decide to engage in sexual activities, there are many options to prevent pregnancy. Barrier methods, such as female condoms and male condoms are probably the most cost effective for birth control (Women’s Health 2011). The rate of effectiveness relies on many conditions, whether the condom is still good because they do have an expiration date, if they have been damaged, if the correct lubricant is used or not. Oil based lubricants breakdown the materials causing damage to the condom (WebMD 2013).

There is also hormonal birth control offered in the form of pills, patches, injections, and vaginal rings. These are hormone releasing agents that prevent the egg from releasing in the ovaries. Implantation devices can be used as well, but are more of a permanent fixture for about 2-5 years. Depending on the device depends on how it prevents pregnancy. Some or hormonal, making the mucus lining thicker in the cervix to prevent sperm from entering. There is a copper device that releases copper into the uterus and kills sperm. Those are both intrauterine devices, but there is another that is implanted under the skin in the arm. It is hormone releasing and prevents sperm from reaching the egg and also thickens the mucus in the cervix preventing sperm to enter. There are other options, but they include sterilization and are more of an invasive surgery (Women’s Health 2011).

3. What are the normal stages of development in a fetus during the first weeks after conception? The first weeks after conception are very busy for the embryo. It travels down the fallopian tubes and is very rapidly dividing mitotically. It implants into the uterine wall for further development. The embry goes through gastrulation, which is the forming of three layers that turn into the greater makeup of the fetus through development. A heart, neural tube which turns into the spinal cord, and the yolk sac have formed to the embryo which later forms the digestive organs. It becomes a fetus just after week 7 (Marieb & Hoehn 2013).

4. What are the hormonal and physical changes going on in Amber during her pregnancy? What is keeping her from menstruating as normal? Physiological changes occurring in Amber’s body are happening in her gastrointestinal, urinary, respiratory and cardiovascular system. She is feeling sick because of the increased hCG, progesterone and estrogen levels. Her story is only until her 11th week of her pregnancy, but she may feel many symptoms throughout the rest of her pregnancy if it is not aborted. Those symptoms could be increased urination because the kidneys are disposing of fetal metabolic waste as well as her own. Blood volume also rises to help accommodate the fetus’ needs (Marieb & Hoehn 2013). An over production of the hormone progesterone is created which stops the follicle-stimulating hormones (FSH) and luteinizing hormone (LH). Those are the hormones needed for an egg to be released and travel down into the uterus for a menstruation cycle. If that does not occur, there is not menstruation (Marieb & Hoehn 2013)

6. How can we account for Amber’s symptoms? It sounds like Amber is having symptoms of morning sickness, bloat, and head ache can be explained by the fetus growing within her which is causing a rise in progesterone and hCG and making her feel sick. Her headache could be caused by the rise in blood volume which she needs to provide enough nutrients to herself and the fetus. The bloat could be caused by the expansion of her uterus. It expands from the size of a fist to filling the entire pelvic cavity by 16 weeks (Marieb & Hoehn 2013).

7. Can we consider the embryo a parasite in Amber’s body, if yes why? What prevents Amber’s body from rejecting the new tissue developing in her body that is genetically different from her tissues? I think we can consider the embryo a parasite in Amber’s body. It is feeding off of her nutrient intake and her blood to survive. A parasite does just that, feeds off the nutrients of the host and benefits from it (Tortora, Funke & Case 2013). Now even though that the embryo benefits from the mother’s nutrients, I also believe that it is beneficial for the mother as well. People procreate to carry on their genetic code, and even though that during her pregnancy Amber does not have as many benefits, I believe the outcome is very beneficial of having a child.

8. How much control does the embryo/fetus have over its own development? The embryo has no control over how quickly it develops. There are only certain times in which vital parts of it are produced, and if anything affects this it would be a teratogen by which the mother had come into contact with. Gestation is during about a 9 month period, and it occurs in the mothers body so it can be protected and nourished during this critical time of development before the fetus is introduced to the world (Berger2010).

9. How is the sex of the embryo determined, and what happens during the developmental process when the sex organs finally become apparent? During the ninth week of development there are two different duct systems that change into female and male reproductive organs. The ducts are the mesonephrenic and paramesonephrenic duct. Depending on the activating hormone is what the sexual organs develop into. The mesonephric duct turns into the male sex organ, and the paramesonephrenic duct turns into the female sex organ (Sajjad 2010) . The gonads then differentiate into the ovaries or the testes (Marieb & Hoehn 2013).

11. What are the regulations regarding abortion in your state and what are the medical, religious and political reasons behind the legislation? The state of Colorado is pro-choice in regards to abortion. It allows any woman over the age of 18 to get an abortion, and those who are minors need consent from one parent or have a judge waiver the consent. Medicaid will even cover the abortion if the pregnancy was due to rape, it causes the mother psychiatric or concern for her health, or if it is a life or death situation. I do not believe the state of Colorado has much of a religious reasoning for it, but more of a large non-religious affiliation with the high Democratic and Liberal rights activists in the larger metropolitan areas. I believe that is the political reasoning as well. The state of Colorado larger cities have carry a high percentage of population, and are Democratic. I believe that this is the main reason that Colorado is a pro-choice state (Pro-Choice Colorado 2013).

12. Is it appropriate for the physician to raise the issue of abortion? I don’t think it is appropriate for the physician to raise the issue of abortion because it is not their place to place a position of their own personal agenda on a patient. The doctor is there to treat the patient, and that point in time he is treating the mother as a patient and the fetus as well. I think it will be appropriate to wait and listen to the questions of the mother to ask what her options are through her pregnancy. If termination comes up from the patient, it just should simply be stated what the process is, when it can occur during pregnancy legally and that since Amber is a minor that her parents would need to be involved in the process. If her health was at risk or if it was a life or death matter, is when I think it is appropriate to bring up abortion.

13. Should the father have any say in the question of abortion? Yes he should have a say on whether a child is aborted. There are many situations where just because the mother and father are not in a relationship, but are both fully capable and responsible for the creation of the child. Just because the mother does not want the child does not mean that the father does not. In the state of Colorado, the mother has the rights to her abortion and does not give any question to what the father would want (Pro-Choice Colorado 2013). In conclusion, it is not known if Amber goes through with the abortion or not. There are many questions raised towards the health of the fetus and mother as well as the moral and ethical aspects.

Since the pregnancy does not show past the 11th week of gestation, it is not known if it is continued or not. Abortion seems to be the last resort answer, and almost a form of birth control to some, but the fetus itself is a patient and should have the rights to be cared for whether or not it is fully developed. In today’s society it seems to be offered after hormonal and other direct forms of birth control. Instead of the option of ending a life that was begun due to actions from two parents that should be held responsible, it should be a life that is cherished Although opinions may differ, a beating heart is an unforgettable organ that is supporting life. 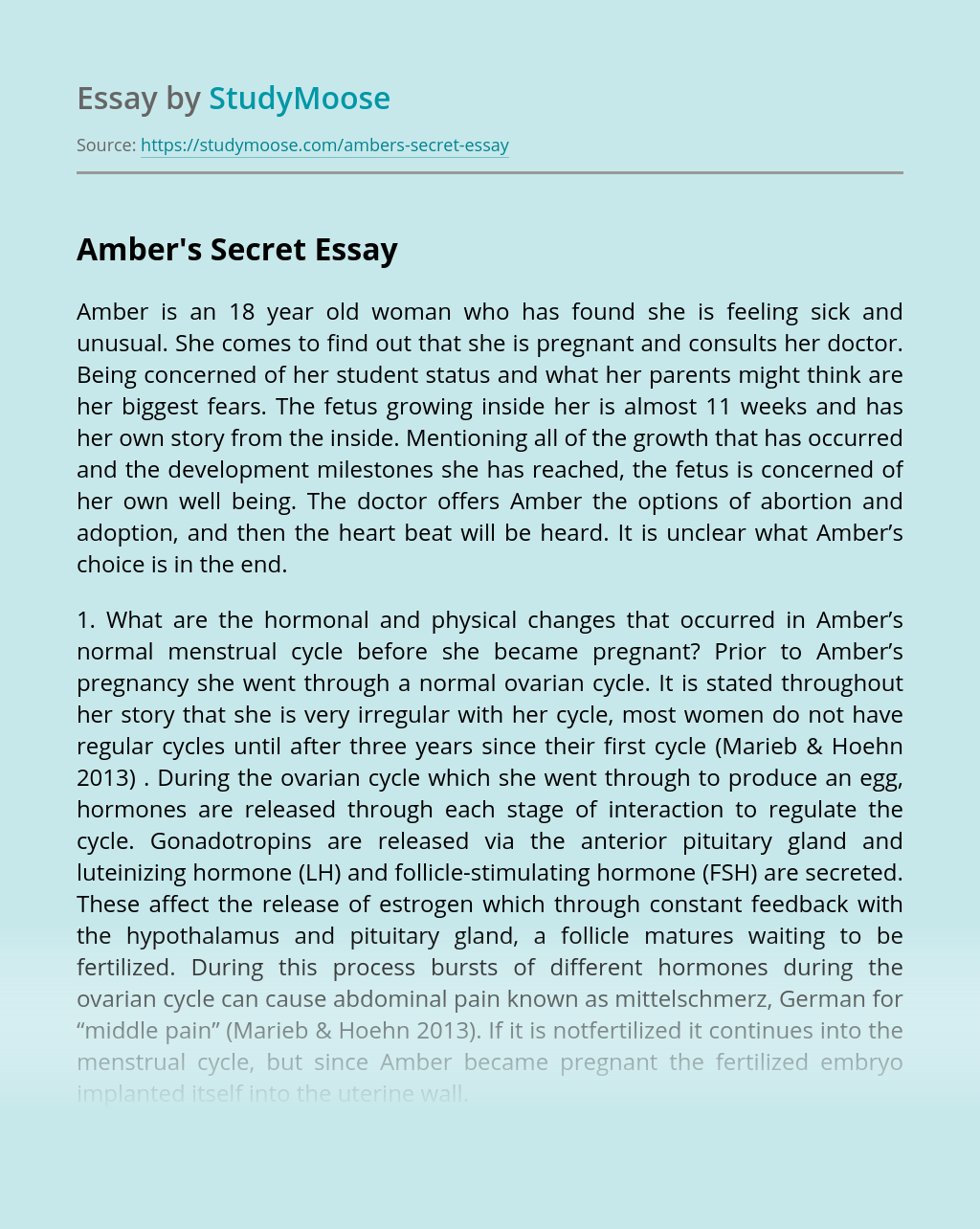