Suicide is one of the rampant issues in our society today. Any activities that result to death in which the victim knows the outcome is termed as suicide. On the other hand, there are many causes of committing suicide. One of the causes is due to the too little social integration. This is the Egoistic suicide. Most of the victims of this type of suicide are the unmarried, particularly the males. Due to their situation that they do not have the other person to interact with, they end up to committing this type of suicide.

Don't use plagiarized sources.
Get Your Custom Essay on Altruistic suicide Just from $13,9/Page

Males in fact are the persons who less engage in social integration. Thus for males, during their married life they interact the most. Males also do not voice out their problems with other people. They often hide it for themselves. When time comes when they feel no one is to lend them a help or there’s no more solution to their problem, they end up taking their lives.

For some instance, too much social integration will cause a person to commit suicide. This type often happened to suicide bombers where they offer their lives for a cause. They commit such type for the benefit of other people or for the sake of other people. Sacrificing to the extent of death is a suicide. This type of suicide is termed as Altruistic suicide, this result from too much social integration. Those people who are bound to social groups or have the intimate relationship or connection with other people will offer their lives for the sake of others.

Some examples of this type of suicide are happening in the military where most of them will sacrifice themselves for their compatriot. Most often suicide cases are committed due to imbalance means and needs. This suicide is termed as Anomic suicide. This is divided into four different subtypes. Acute economic anomie is due to the lack of the institution to fulfill social needs. Human nature wants to feel important in a group. Most of the people engage or join a group for the purpose of fulfilling their social needs.

Most of the people who commit this type of suicide feel that they do not have the other people or they do not have the people they expected to be at their side in time of their needs. Some also commit suicide because they feel unsatisfied or unhappy. Most who commit this type of suicide are the rich. Most of the victims think that their wealth will make or give them the happiness they are longing. Failure to acquire the happiness they expected pushes them to commit this suicide. This type is termed as chronic economic anomie. Some also commit this suicide due to insufficient in providing happiness by the industrial goals.

Another type of suicide that exists in our society is the acute domestic anomie. Failure to adopt sudden changes on the micro-social level will result this type of suicide. One of the examples is the widowhood. Widows often do not immediately adopt the sudden situation of being alone. In most cases those who commit this type of suicide are the ones who are left with a big responsibility (e. g. raising the family alone). Some of them end up in taking their life to ease the burden because of the fear to face the reality or the responsibility.

Some among women commit suicide because of their limited opportunities in their married lives; knowing that most women are taking the responsibility in raising their children thus making themselves as a full time housewives. Married women often commit this type of suicide than unmarried women. On the other hand, unmarried men commit this suicide more than the married men. This is because of the imbalance sexual and behavioral needs. In marriage, man and woman balance the needs of each other. Fatalistic suicide is committed by slaves, childless married women, and young husband.

This is a very rare phenomenon. This is due to the feeling that their lives are of no significance at all thus ending up committing this type of suicide. For some, suicide is called the highest level of artistry. They refer it as art but in reality it is not because of art that they commit such crime. Problems are mostly the cause of suicide and for some, lack and too much social integration are the reasons. Whatever are the reasons, suicide is still an act that is against the law of God. Work cited: Durkheim, E. (1979). Suicide: a Study in Sociology. The Free Press: New York 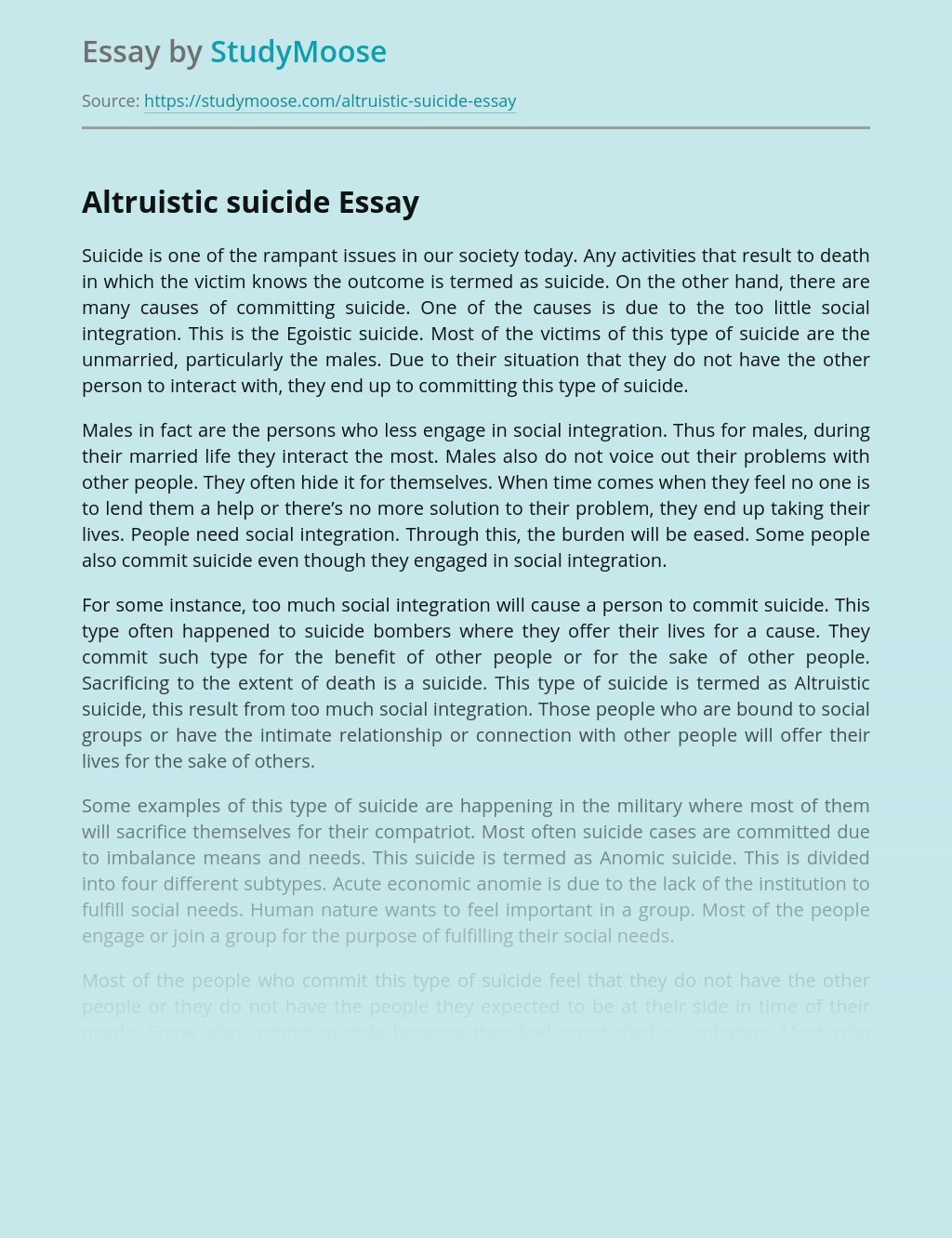 Reflections on "Bowling for Columbine"

The Columbine High School massacre struck me the hardest. It was horrifying to see the whole school in turmoil. Students and teachers were running wild and everyone screamed and panicked as the vitriolic killers aimed for their next target. Even more repulsive, the killers were only teenagers who study at that exact school in Columbine...

The novel Thirteen Reasons Why is a young-adult fiction by Jay Asher. According to Goodreads, he was born in Arcadia, California on September 30, 1975. He grew up in a family that encouraged all of his interests, from playing the guitar to his writing. He attended Cuesta College right after graduating from high school. It...

Get Essay
Does Right to Life Include Right to Die ?

No work can be successful without the guidance and blessing of elders and this work is no exception. It is a matter of immense pleasure to express my gratitude to my faculty Hon’ble Prof. S. K. Gaur for his guidance and excellent insights which gave direction andfocus to this paper. I thank him for lending...

Why Kayerts Killed Himself, an Outpost of Progress

There are a number of reasons Kayerts hangs himself at the end of the story. Previously, he shoots Carlier mistakenly after they have been arguing about the sugar. Kayerts feels lethal ill (p. 33, l. 64) shortly after killing his assistant and only pal at the trading station. Afterwards, Makola appears and talks with Kayerts....

The natural end of every human life is death. Some people, for reasons that have never been fully understood, choose to end their own lives. This is called suicide, which means literally “self-killing. ” According to Dryden-Edwards (2013), Suicide is the process of purposely ending one’s own life. The way societies view suicide varies widely...