Suicide in the Media and its Effects on Adolescent Suicide Rates

Suicide is a leading cause of death in adolescence in Canada today (reference). Suicide and mental illness stigma is a large issue society has been trying to combat in the 21st century. Recently, a public uproar ensued after the release of a Netflix series, called “13 Reasons Why,” which depicted teen suicide. Controversy arose from the argument of whether the show was romanticizing suicide or just showing the harsh reality of suicide and the negative effects it has on everyone involved.

Don't use plagiarized sources. Get your custom essay on
“ Suicide in the Media and its Effects on Adolescent Suicide Rates ”
Get custom paper
NEW! smart matching with writer

Studies showed that the rate of suicide among adolescent boys surged during April 2017, the month after the premiere of the show, which could be in part due to the release. (reference) The portrayal of suicide is prevalent in many facets of media, some of which include, television shows, films, books, the news, and social media. These depictions can have negative effects on the audiences consuming it, and oftentimes suicide rates surge during times of high media coverage. An example could be when a celebrity inflicts their own death, suicide rates tend to increase, especially in areas where there is extensive media coverage.

There has also been evidence of similar effects with depictions of suicide in television shows. Finally, the desensitization of suicide through dark humor found on social media could also be affecting this issue. Could all these correlations be causations or just a coincidence?

The issue of suicide has plagued human existence from the beginning of time, from the death of philosopher Empedocles in 435 B.C (reference) to struggling Dutch artist Vincent Van Gogh in 1890 (reference) and to more recently lead singer of 90s rock band Nirvana Kurt Cobain in 1994 (reference).

All these famous deaths occurred in completely different eras of human existence yet they have all been caused by the same self-inflicted act which is still a huge problem in society today.

This social epidemic has recently hit new highs with suicide being the 3rd leading cause of death for 15 to 24-year-old Americans (CDC, 2018). With the emergence of the television, internet, and other forms of media, people now more than ever before have been exposed to suicide both in conversations and depictions and a large amount of this audience includes adolescence. One of the most studied works of English literature by high school students, ‘Romeo and Juliet’ by William Shakespeare, depicts the act of teen suicide. Television shows depicting suicide are oftentimes geared toward a teenage audience. Adolescence is often one of the most tumultuous times in one’s life, with a variety of environmental, physiological, and mental changes. At this state of mental fragility, could all this exposure have any impact on adolescent behavior?

There is often a debate about whether exposure to these types of issues is beneficial or actually harmful. Emulation suicide is usually a concern for those who think this type of exposure will have negative effects, this also known by the term, ‘Werther effect’. Another theory relating to this topic is the Papageno effect which suggests that similarly to how suicide in the media may have adverse effects, coverage of positive coping mechanisms instead may have positive effects and be more beneficial. (Niederkrotenthaler, 2010).

Suicide in the Media and its Effects on Adolescent Suicide Rates. (2020, Oct 02). Retrieved from https://studymoose.com/suicide-in-the-media-and-its-effects-on-adolescent-suicide-rates-essay 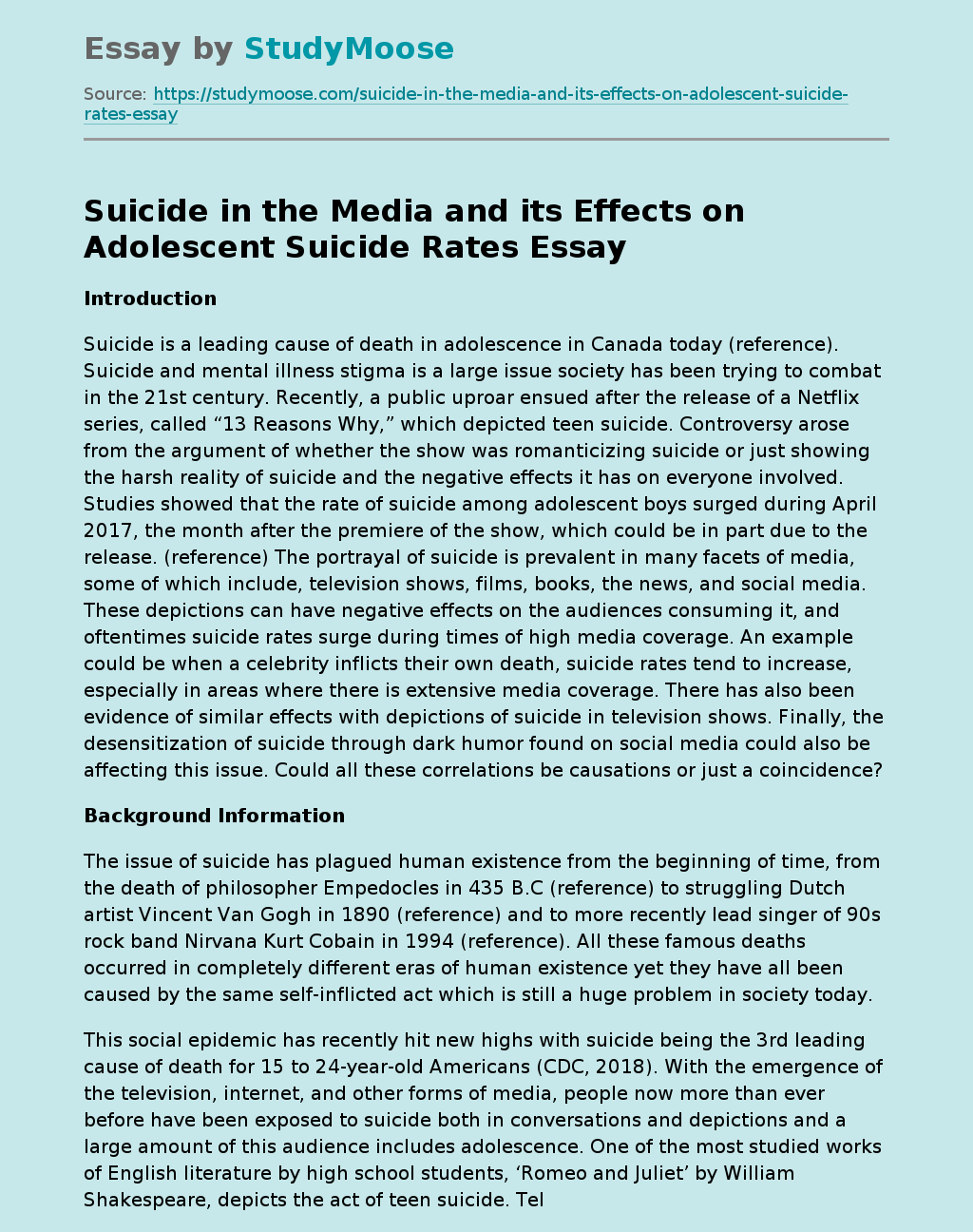