All About World War 2: London

In the afternoon of September 7, 1940, all civilians in Britain had their lives changed forever. The Germans realized the key to success in World War II was by destroying London, eventually forcing Britain to come to terms. “The Blitz” had continued for fifty-seven consecutive days. The Blitz was a period of frequent bombing from Germany in Britain. During “The Blitz” the people of Britain realized they must try their best to evacuate, keeping as many people as possible safe.

When the bombing started, many feared to do everyday things we do in life.

Don't use plagiarized sources. Get your custom essay on
“ All About World War 2: London ”
Get custom paper
NEW! smart matching with writer

Things such as taking walks, taking the trash out, and playing outside. That did not stop newspapers from keeping at work. “The Daily Express” reported the bombing of London for six hours. Britain immediately fought back when the Germans started the bombs. In July of 1940, two thousand six hundred aircraft flew for the German Luftwaffe, while six hundred forty flew for Britain’s Royal Air Force. Great Britain also had Air Raid Wardens plan for anti-gas measures, evacuation, ambulance, and fire services.

There were many heroes throughout World War II, some of them being younger than one may expect. In addition to soldiers, children and other civilians were also heroes. They did many heroic acts such as sharing food with one another, doing their best to protect each other, and trusting each other. Another group of people who were heroes were the AFS. They were huge heroes in London during the bombings.

In September of 1940, the AFS had to put out one thousand fires per night. Materials such as sand, earth, and water were used to put out these fires.

Out of fear, Britain frantically looked for strategies to fight against the bombings. They would take away all street lights, traffic lights, and car headlamps. They tried not to use any light at all, so it would be difficult for the Germans to attack. Heavy blackout curtains or shutters on every window had to be closed at night. People were taken to court and fined if their houses showed any light, at night. Imagine having to live this lifestyle for a long time, I cannot even begin to picture how difficult it would be!

Throughout the bombings, many had to take shelter to protect themselves from the dreadful bombs. Of the 3.2 million people in London on November of 1940, 1.15 million people took cover in private shelters. For every one hundred people in London, nine people were in public shelters and twenty seven people in private shelters, while sixty four people not in shelters at all. This tells us that access to shelter was not very easy to receive, and few people were able to be sheltered in either public or private shelters. As for the home front, there was an occurrence of inflation, reduced public transport, and extreme rationing. Purchase tax was also introduced in October 1940.

While men were assigned new roles during World War II, women also had new assignments that greatly helped London. Some of the new roles of men were coal miners and members of the merchant navy. Less fit or older men joined the Home Guard or the Civilian Defense Services. Women came into their own to fill the gaps left by the departing men by beginning to be bus conductresses, postal workers, and locomotive cleaners. Many people tried in every way they could to help not only London, but their country.

Due to desperate times, extreme rationing was introduced in Great Britain at the time of the attack. Rationing was introduced because food and other resources became so limited during World War II. Civilians were allowed no more than sixty six ration coupons per year in June of 1941. The German bombs did not stop the British from having some of their favorite beverages. Besides beer, tea was a beverage that was great during the war years. Beer and cigarettes were popular during the bombings and World War II in general because they were encouraged stress relievers and were heavily publicized. 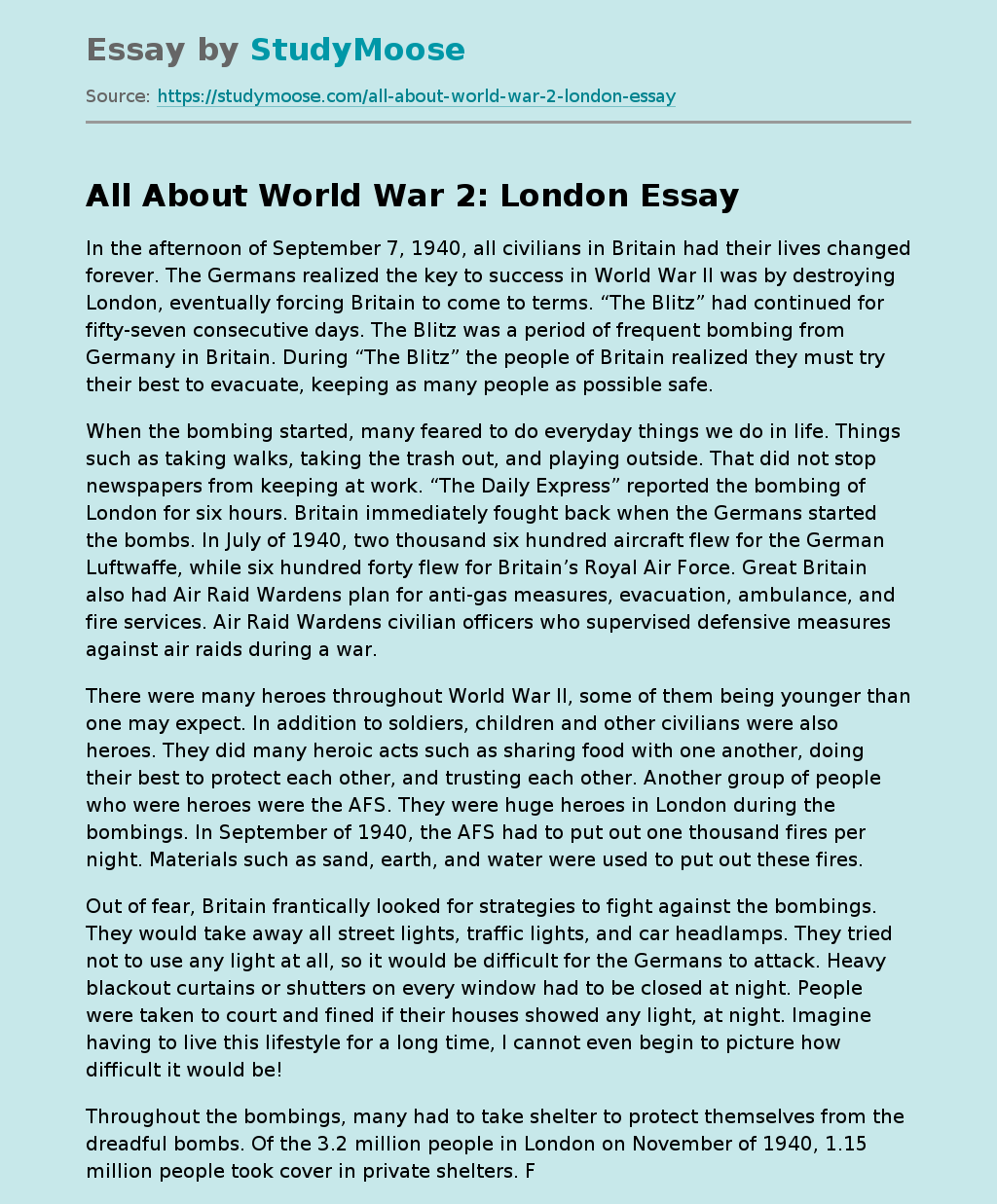