“..and, in the last analysis, nothing is any good unless you can look up just before dinner or turn around in bed – and there he is. Without that, you’re not a woman” Is this the message of the film? Made in 1950, the film ‘All About Eve’ screen written and directed by Joseph Mankiewicz, was deliberately engineered to entice women back into their homes after WWII had forced many to assume working roles in the outside world. The film focuses on publicizing the importance of the image of a nuclear family and traditional gender roles and how finding love is endorsed as the ‘proper’ course for women.

Don't use plagiarized sources. Get your custom essay on
“ All About Eve ”
Get custom paper
NEW! smart matching with writer

This is evident through the roles and character development of the three main women in the film; Karen Richards, Margo Channing and Eve Harrington. Through these characters, the film explores the fulfillment of an archetypal 1950s American housewife and the hollowness of actresses’ career success compared to marriage.

Furthermore, the film depicts self-supporting women as a threat to conservative values as they inhabited masculine traits.

In the film, Mankiewicz emphasizes the security, gratification and permanence in housewives post Cold War. This is evident through the role of Karen Richards, ‘the wife of… playwright’ Lloyd Richards. Lloyd and Karen personifies the ideal marriage where Lloyd is the bread winner, and Karen operates as a traditional, ‘happy little housewife’. Mankiewicz repeatedly frames Karen with characteristics of pureness and happiness through the use of bright camera lighting in mid-close up shots, portraying her as luminescent and angelic.

In addition to this, Karen is often shot in light coloured costumes in contrasts to Eve and Margo, who are continuously framed in dark colours throughout the film, suggesting her innocence. Both of these techniques highlight her fulfillment from marriage compared to Eve and Margo who are independent and unmarried.

Karen’s character is used as a reflection of 1950s America stereotypical housewife who is completely defined and loyal to her husband. This is evident during the film hinting Lloyd’s indiscretions, Karen remains loyal to him, and even blames herself for his unfaithful behavior, where she wonders in a voiceover about ‘that helplessness you feel when you have no talent outside of loving your husband.’ Here, love is represented as a ‘talent’ and the generic mode of the line indicates a duty of wives to their husband. Ultimately, Karen is a reflection of the traditional housewife in 1950s America and is perceived as the most stable and mature female character as marriage has provided her with financial and emotional security, social mobility and protection. Throughout the film, career accomplishments and fame is presented as fleeting and temporary, whilst marriage is emphasized as the utmost success for a woman. Mankiewicz establishes that females who rise to the top of their profession are only to be faced with the glass ceiling of the patriarchal status quo.

This is apparent in the character Margo Channing, a ‘great star’ whose days as Broadways reigning star are numbered as she is at the peak of her career, at the age of 40. Although she is ‘talented, famous [and] wealthy’ Margo is insecure that when she retires from the theatre she’ll be alone, without a career and without a man to love her. Marriage is offered as a solution for Margo, and only once she makes the decision that allows her to ‘get back to being a woman’, do we see a gradual shift from Margo being an actress to being a ‘proper’ married women. The gratification from marriage is highlighted through the use of camera lighting in the cub room scene after Bill and Margo announces that they’re getting married. A close up shot of Margo’s smiling face and relaxed manner with radiant lighting similar to Karen’s indicates true happiness as she has achieved the role of housewife. Through portraying her positively, the film asserts this will provide her with the happiness and ‘sentiment’ she had been actively rejecting. In short, the use of Margo’s growing happiness as she transitions from professional career for marriage, the film positions the audience to view domesticity as providing ultimate fulfillment for women.

In an era where women were expected to conform to social norms, those who failed to take on the role of a nurturing mother with a financially secured husband were labeled as a threat to society. Mankiewicz uses the characters Margo and Eve to explore how independent and successful careered women possess masculine traits because they do not have a man. Prior to Margo’s marriage with Bill, the film portrays her with a masculine demeanor through her deep voice and posture. In the scene of Margo’s voiceover, the audience can see that Margo is the head chief of the house, with Birdie and Eve jostling for her favour. This highlights Margo’s masculinity as during this era, the males were the dominant figure in the house, and the wives role was to please their husband. Therefore, Margo is not presented as an ideal woman as she takes on the male role in her own home.

Only once Margo marries Bill, we see her conform to society’s expectations of married woman, as she leaves paid employment upon marriage to become a domestic housewife. Mankiewicz also depicts Eve, an independent and constructed success as manipulative, conniving and calculating mastermind driven by personal ambition, all of which were dominant values in a masculine society at this time. Furthermore, women without a man to love were displayed with masculine characteristics, and thus not truly a woman because they did not abide by reactionary American values.

Ultimately, the film ‘All about Eve’ is marked by a polarizing gender ideology, used to promote marriage as a romantic ideal and women. Through the roles of Karen, Margo and Eve, the film highlights that married women find happiness from serving their husband, the inevitable emotional emptiness that women will experience e if they reject their domestic roles in their pursuit of a career, and how independent women show traits that aren’t consistent as a true 1950s women. Thus the film suggests that domesticity is what provides women with ultimate satisfaction. 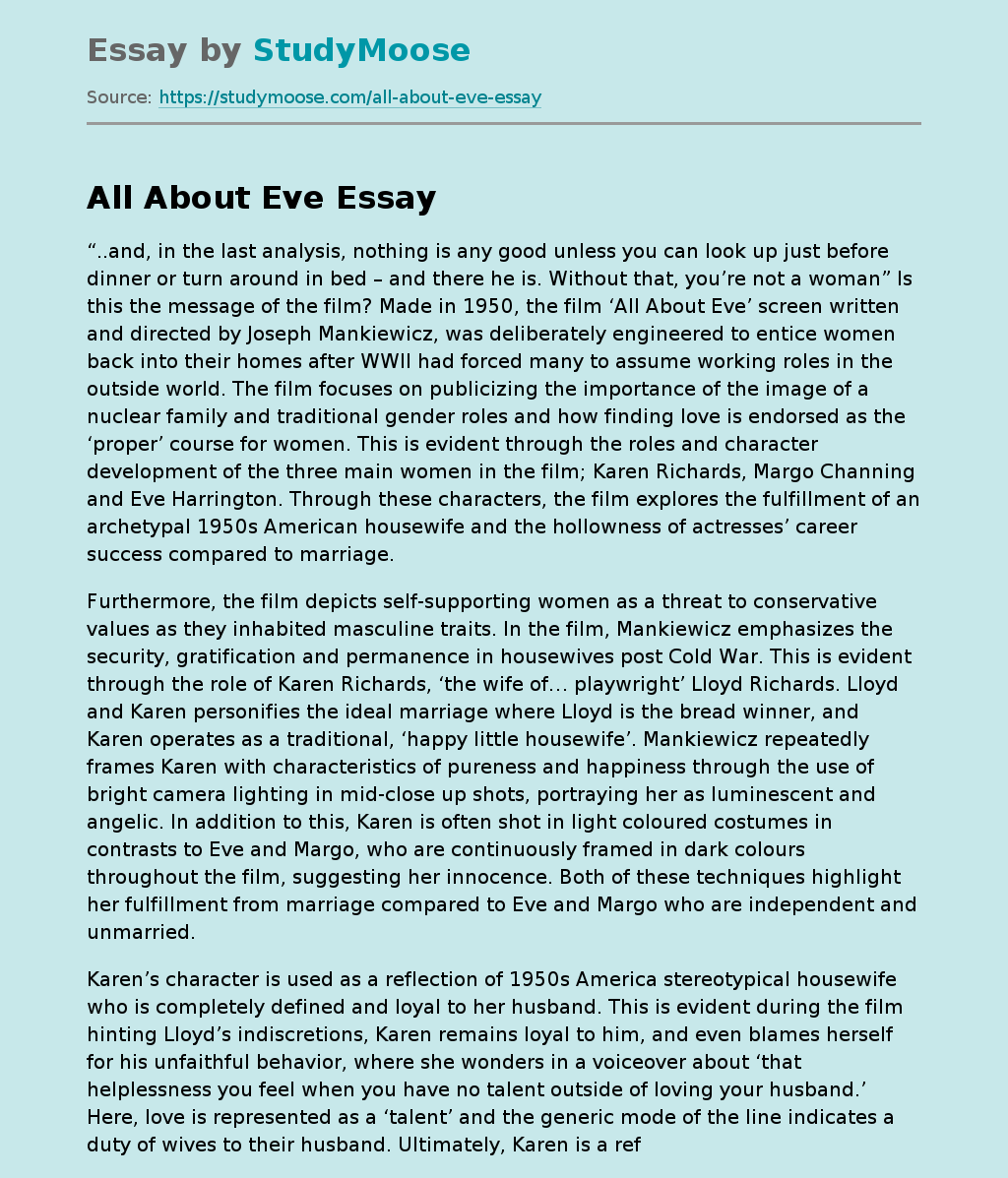