“Up From Slavery”, written by Booker T Washington and “The Souls of Black Folk” written by William Edward Burghardt Du Bois offer readers first hand knowledge and experiences of the lives of two black leaders in the late 19th and 20th century. In these persuasive arguments, Du Bois and Washington laid down the groundwork for future leaders although most of their work was in not congruent.

Although Washington and Du Bois were both believed in the advancement for blacks, their opposing philosophies would become the major contrasting factor between “Up from Slavery” and “The Souls of Black Folk” despite small similarities.

Don't use plagiarized sources. Get your custom essay on
“ Booker T. Washington and Du Bois ”
Get custom paper
NEW! smart matching with writer

Washington and Du Bois have the same commonality in regards to education. They are both very educated men. Washington has worked hard to achieve the high education he has obtained. He has graduated from Hampton Institute and went on to attend Wayland Seminary. Du Bois attended Fisk University earning his bachelorettes degree and then went on to graduate from Harvard University obtaining his masters degree.

Both of these men have high education in common that has contributed to their notoriety.

The belief that education is fundamental to create change for African Americans was shared by both Washington and Du Bois. Gaining an education was something the both of them obtained and therefore, pushed them to urge black communities of the importance of education. Although the two men both sought different reasons blacks should acquire an education, the premise of schooling was to give opportunities to black people following the remaining impact on slavery coming to an end.

Washington’s recognizes that the largest impact on his education was his teachers, he states, “There is no education which one can get from books and costly apparatus that is equal to that which can be gotten from contact with great men and women” Washington 21). He simply believes that it was not enough just to go to school and read information, but conversing with educators is a big factor in learning. Furthermore, Du Bois believed in order to stay ahead was to have educated individuals.

He states, “The training of the schools we need today more than ever- the training of deft hands, quick eyes and ears, and above all the broader, deeper, higher culture of gifted minds and pure hearts” (Du Bois 11). Du Bois believed in order to persevere, especially to prevent another form of slavery to have educated individuals.

Essentially, Washington believed that it was in the best interest of black people at the time to act “accordingly” for economic gains and a secure lifestyle. Most importantly, he was hoping that would prevent hate violence targeting blacks. He also believed that in order persist, black people through education or manual labor should make themselves seem of value to earn respect.

He states, “In this address I said that the whole future of the Negro rested largely upon the question as to whether or not he should make himself, through his skill, intelligence, and character, of such undeniable value to the community in which he lived that the community could not dispense with his presence.

I said that any individual who learned to do something better than anybody else – learned to do a common thing in an uncommon manner – had solved his problem, regardless of the colour of his skin, and that in proportion as the Negro learned to produce what other people wanted and must have, in the same proportion would he be respected” (Washington 202).

In contrast, Washington believes in political action. He knows that one cannot excel on education alone but there has to be political representation for black people in a large scale. If there is no representation or justice for the disenfranchised community then blacks will always be viewed as inferior.

Du Bois counters Washington’s belief expressing, “So far as Mr. Washington apologizes for injustice, North or South, does not rightly value the privilege and duty of voting, belittles the… effects of caste distinctions, and opposes the higher training and ambitions of our brighter minds so far as he, the South, or the Nation does this we must unceasingly and firmly oppose them.

By every civilized and peaceful method we must strive for the rights which the world accords to men” (Du Bois 47). Du Bois sought equality through education to gain a place politically for the prosperity of blacks on every level, while Washington believed in earning an education as a way to appeal to their white counterparts to achieve a form of fairness.

Unlike Washington, Du Bois believed submissiveness was not respectable or necessary. In “The Souls of Black Folk”, it simplifies Washington’s beliefs which states that black people should give up three things, “…First, political power, Second, insenstince on civil rights, Third, higher education on Negro youth- and concentrate all their energies on industrial education, the accumulation of wealth, and the conciliation of the South ” (Du Bois 51).

Du Bois expresses that the consequences to Washington’s beliefs are “1.The disenfranchisement of the negro 2.The legal creation of distinct status of civil inferiority for the Negro 3. The steady withdrawal of aid from institutions for the higher training of the negro” (Du Bois 51). Submissiveness of blacks according to Washington allows them to remain in good regards to white people, however Du Bois believed that it keeps them inferior. 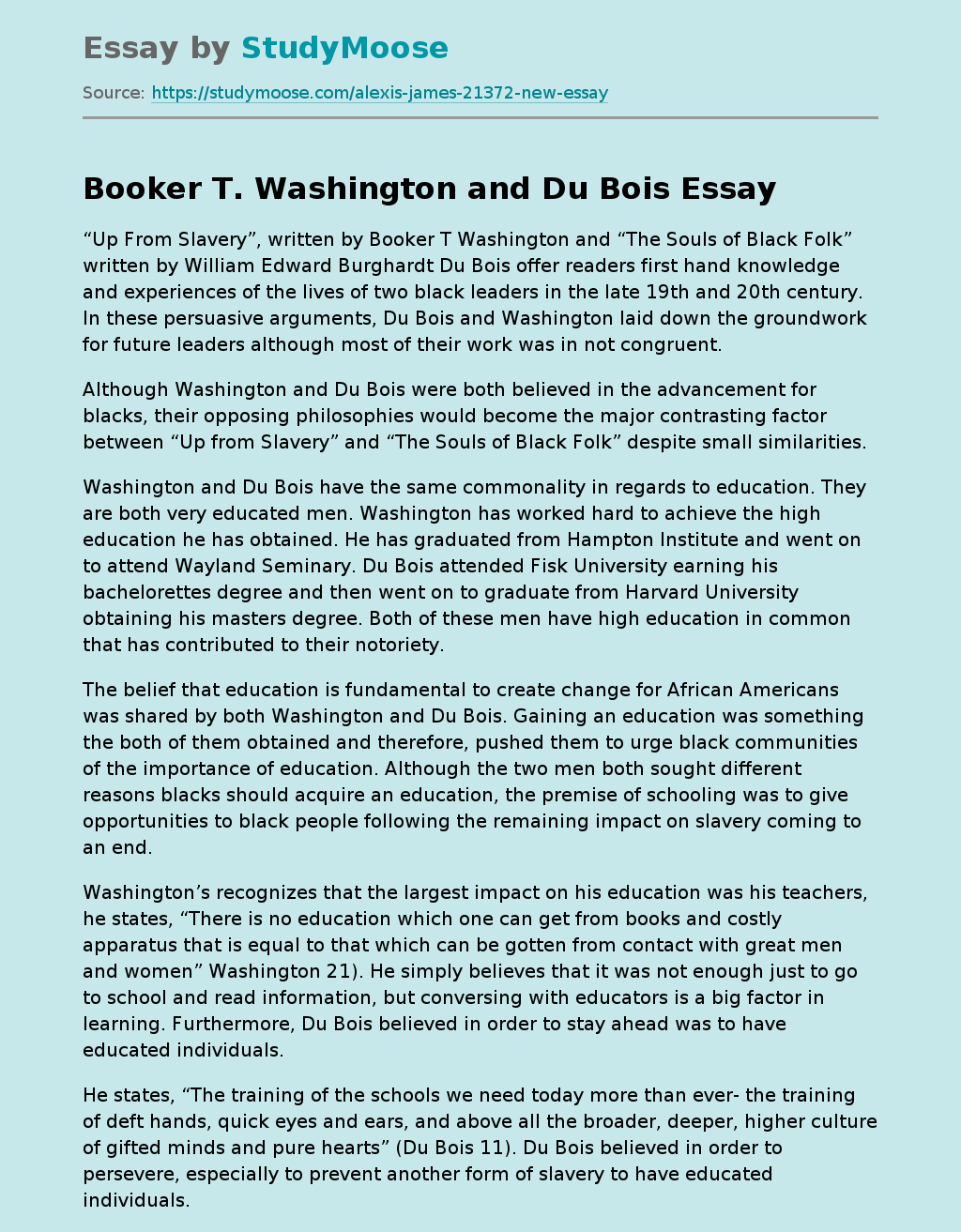