Age Discrimination Within The Work Place

Age discrimination in employment is a complex issue which impacts on many areas of Government policy and can have many implications for individuals themselves. Age discrimination can occur across the whole spectrum of employment and can affect both young and older people. It can affect a person’s chances of getting a job, as well as their chances of promotion or development when in work. Age can also be a factor in employers deciding who should be selected for redundancy.

Ageism seems to be more common in the workplace than racism or sexism.

Don't use plagiarized sources. Get your custom essay on
“ Age Discrimination Within The Work Place ”
Get custom paper
NEW! smart matching with writer

Although only about 20% Of all complaints filed with the federal Equal Employment Opportunity Commission (EEOC) are for age discrimination, settlements and jury awards are substantially higher in such cases than in those for race, sex or disability discrimination (Age Discrimination, 1999). Older people are accused of lacking energy and flexibility, while young people lack experience. Many people are refused the opportunity to show whether or not they have what it takes because of their age.

These people are being robbed of their employment opportunities.

There can be both direct and indirect forms of age discrimination in employment. The most obvious forms are where people hold strong, stereotypical views about a person’s capabilities to do a job or to be developed because of their age. For instance, an employer could regard all 18 year olds as immature and incapable of managing older staff, even if they have the right qualifications and experience for the job. On the other hand, an employer could consider all those over 50 to be incapable of learning about new technology, because “that’s something that youngsters pick up better –isn’t it?” (Age Discrimination, 1993).

Age discrimination affects the younger worker of youth wages irrespective of ability. It can affect workers in their twenties through the tendency to set arbitrary age limits in job advertisements as a substitute for a decision based on the merits of the applicants. It affects women over 35 and men over 40 who are trying to find new employment or change direction mid-career. Older unemployed workers experience greater difficulty finding work and suffer longer periods of unemployment than other age groups. The proposed legislation will oblige employers to abandon age stereotypes and assess individuals on their merits (Age Discrimination, 1993).

There are also more subtle forms of age discrimination, where a person may not actually realize that they are discriminating on the grounds of age. This can take the form of assuming that an older person is less likely than a younger colleague to want to be considered for promotion or to go on a development course. In addition, some older workers themselves can doubt their own ability to learn new skills and may rule themselves out for opportunities. For instance, some older workers may feel they would not be able to learn about information technology when they have in fact been learning about developments in technology all their working lives.

There is a thin line between trying to help people who are most likely to experience age discrimination in employment so that they have the same opportunities as others, and positively discriminating in their favor at the expense of others. Having identified unacceptable stereotypical behavior, there is a danger of adopting stereotypical attitudes such as “all older people are more reliable than younger ones” to try and bridge the gap. This approach might help to tackle some stereotypes but it does not help to promote the vision of an economy making the most of the diverse skills, potential and experience available to it (personal communication, April 1, 2000).

Older workers often face discrimination. Employers may not want to hire older workers because of the following reasons: the employer thinks that they are less productive, they may demand higher salaries, they are more costly to insure, or they may not work long enough for the employer to recover any training costs which it has incurred. The same login applies to promotions and transfers. An employer may want to shed itself of its older workers to cut costs (Age discrimination in the workplace, 1999). The Civil Rights Act does not make age discrimination illegal, but Congress has since enacted another law, the Age Discrimination Employment Act of 1967 (ADEA).

The ADEA is administered by the EEOC, and it is similar in most respects to the Civil Rights Act. Both disparate treatment and disparate impact charges are possible. The Act protects workers 40 years of age and older. A 45-year-old who applies for a job and is rejected in favor of a younger worker can claim disparate treatment. The employer will then have to show that the younger worker was better qualified or provide some nondiscriminatory reason for its decision.

An employer could argue that it paid a newly hired younger worker more than an older current employee because this was necessary to attract the younger worker to the job. Except in a situation in which the firm is under great financial stress, it is illegal to get rid of older employees just to save money. In disparate impact cases, employees must show that the entire protected group (workers 40 and older) is affected by the employer’s practice and not just some part of the protected group (workers over 60, for example) (Player, 14).

The law does allow age to be considered a bona fide occupational qualification (BFOQ) more easily than it does sex, but still this defense is relatively narrow. An employer has to show that most people in the protected category who would not qualify for a job because of some age limitation cannot do the job effectively. Alternatively, the employer has to show that some older workers cannot do the job effectively but that it is not possible to know which specific workers cannot. Effectiveness is most often judged in terms of the safety of coworkers and customers (Player, 51).

Younger persons are stereotyped as irresponsible and inexperienced. Employers may feel they are not serious enough to take on such demanding positions. The younger the person is, the more immature he/she may be.

Younger persons are very often under paid, due to their age. The question of whether the payment of a lower wage to workers under 21 should be exempted by anti-discrimination legislation has opposing arguments; each with some merit. On one hand, there is concern that the abolition of youth wages would lead to an increase of youth unemployment and reduce the opportunities for young workers to gain experience. The opposing view is that the concept of lower rates for people under 21, based as it was on the idea that people below this age would be supported by their parents, is outdated. Instead, workers should be paid according to merit and productivity and a training wage would be more appropriate option for an inexperienced worker.

Prohibition against age discrimination is found in the Age Discrimination in Employment Act, 29 U.S.C.A.? 621 et seq. (ADEA). As the operative language of the ADEA was modeled after Title VII, similar terms of the two statutes are given a parallel construction. Western Air Lines, Inc. v. Criswell (S.Ct.1985). As does Title VII, the ADEA reaches all aspects of workplace discrimination: hiring, assignments, promotions, compensation, environment, and discharges.

The ADEA prohibits age discrimination against individuals who are at least forty years old. Age distinctions applied to those under age 40, such as imposing a minimum hiring age of 18, 21, or 30, do not violate the ADEA. However, a maximum hiring age, of say 35, is proscribed age discrimination if applied to a person over the age of 40. The age 70 limit for protection was removed in 1986. Consequently, unless justified by a defense, any fixed retirement age, 65, 70, or even 80, is a violation of the ADEA (Player, 15).

For those over age 40, younger persons are protected against age discrimination under the same terms, as are older persons. It thus violates the ADEA to prefer a person 65 years old to one who is 45 years old. It is age discrimination to impose on workers of one age group requirements or conditions not imposed on other age classes. An employer may not, for example, require employees over the age of 50 to take physical or mental test not given to workers under 50. Standards of performance and discipline must be applied equally to all age groups (Player, 14).

1. Recognize age bias and discrimination as the pervasive, escalating issue it is.

2. Do an audit to assess your organization’s culture.” Find out how employees feel about older workers and how those feelings manifest themselves in the workplace. Messages often emanate from the CEO and are picked up by managers and supervisors.

3. Re-think attitudes about older adults in your workplace.

4. Initiate a dialogue between managers of different departments regarding age discrimination. Discuss the issue at appropriate professional organizational meetings to find out how other businesses are dealing with it.

8. Tap into agencies and networks that involve the older adult population.

9. Develop community relations programs to support services for older adults in the community as part of your company or organization’s agenda for being a good corporate citizen.

10.Build morale and higher productivity by demonstrating to older workers that they are valued and appreciated.

Age discrimination is an issue, which we cannot afford to overlook. Anyone who hopes to enter the workforce, or who is already a part of the workforce, should be concerned with this issue. Many people are refused the opportunity to show whether or not they have what it takes because of their age. The young and old must be aware of this type of discrimination.

Age Discrimination Within The Work Place. (2020, Jun 01). Retrieved from http://studymoose.com/age-discrimination-within-the-work-place-new-essay 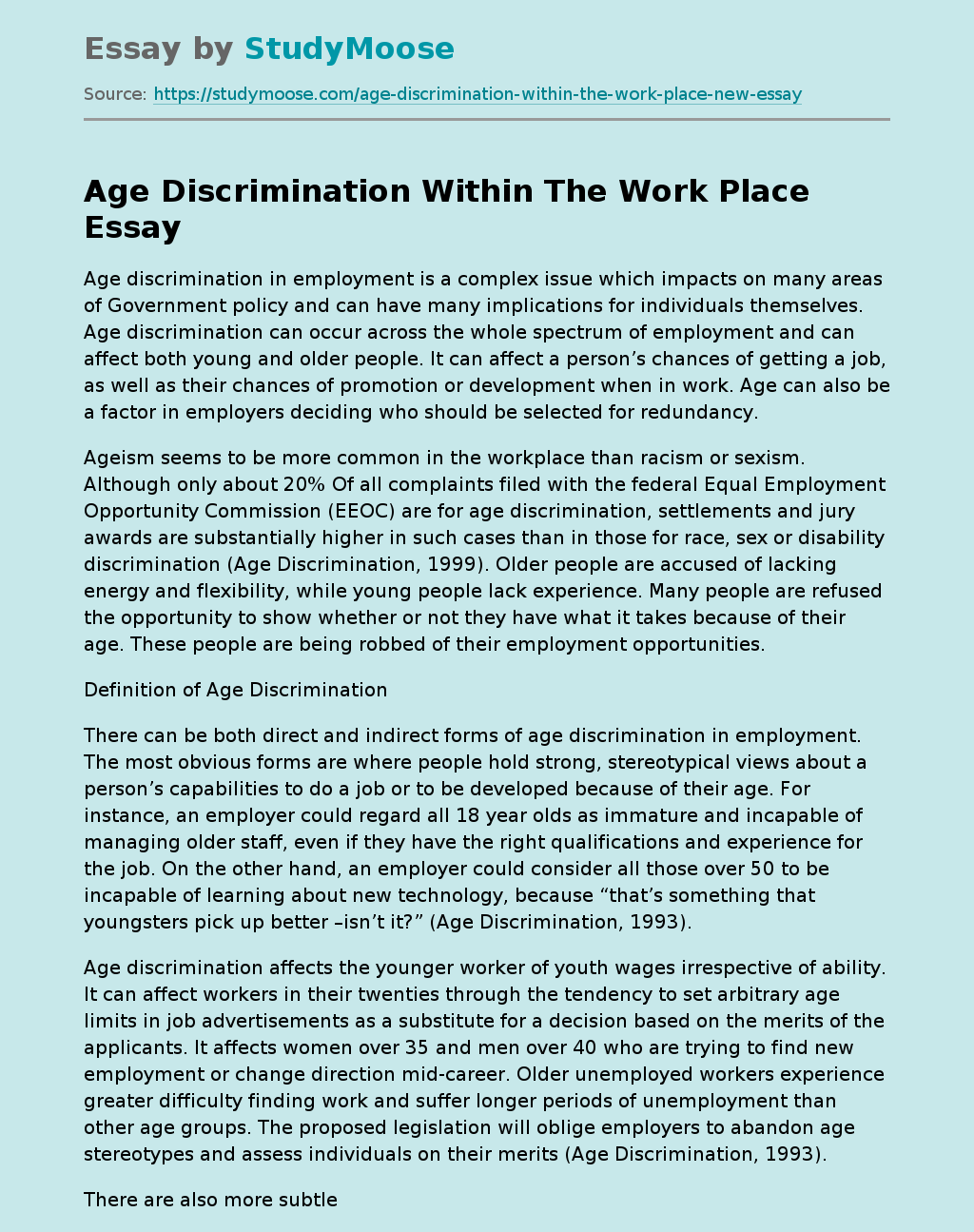