Don't use plagiarized sources. Get your custom essay on
“ African American Discrimination ”
Get custom paper
NEW! smart matching with writer

The original Africans were not given the chance to colonize or immigrate to the United States; they were hunted down and chained together like animals, stacked on top of each other on the bottom of the ship, and sailed across the Atlantic Ocean to a life they were not accustomed to- slavery. January 1863, Abraham Lincoln signed the Emancipation Proclamation declaring freedom for African American slaves in slavery states. Following the signing of the bill, African Americans started facing even more problems with racial discrimination, segregation, racism, and prejudice.

They could not join any “white” organizations, attend any “white” schools, eat at “white” restaurants, or work at “white” establishments. Voting rights were stripped away, economic opportunities were denied, and suitable housing was not an option for them. In some areas in the South, African Americans couldn’t even worship at their own church or attend their own schools. African Americans were kept in a state of illiteracy and treated as if they were inferior to whites. Life conditions were hard in the South for whites, new immigrants, and former slaves; that brought about the Great Migration to the Northern states.

African Americans went to the North searching for a promising life full of freedom, equality, and prosperity (2008). Between 1954 and 1968, the Civil Rights movement fought to abolish racial discrimination in the South. African American political leaders sought out ways to gain equality for blacks. Civil Rights programs were designed to enable people to become full citizens (Sykes, 1995). The Civil Rights Act of 1964 covered discrimination based on race, color, creed, national origin, and sex (Schaefer 2006). The United States Constitution was written to give Americans, not just African Americans, legal rights. The first amendment gave people the freedom of speech, assembly, and religion, and press, the fourth amendment guaranteed equal protection under the law, the thirteenth amendment made slavery illegal, and the fifteenth amendment forbids racial discrimination in access to voting. It took quite a few years for everyone to get used to having their newfound freedom. In the early 20th century, African Americans were still struggling for equality among whites in the workplace, education, income status, and social class.

Many people are still being passed over for promotions because they are not what corporate America wants. Women have been pushed to the back of the line and given the lowest paying position resulting in double jeopardy (the subordinate status twice defined, as experienced by women of color) (Schaefer 2006). The glass ceiling, glass walls, and glass escalator (barriers that prevent the promotion of a qualified worker because of gender or race) effect has made an impact in the workplace with African American men and women as well. Whites have been given the best of everything over African Americans- positions, salary, housing, education, and political power.

To help fight for change, affirmative action was created. Affirmative action (positive efforts to recruit subordinate group members, including women, for jobs, promotions, and educational opportunities) (Schaefer 2006), gave power back to the African American people. Today, African Americans have broken down barriers and achieved great success in several areas of life such as buying houses, getting college educations, obtaining high paying jobs, and joining distinguished groups. Not all discriminatory acts have been abolished completely; African Americans are still facing subtle racist acts against them that they tend to go unreported or unnoticed. As long as people continue to fight for positive change it can be achieved. 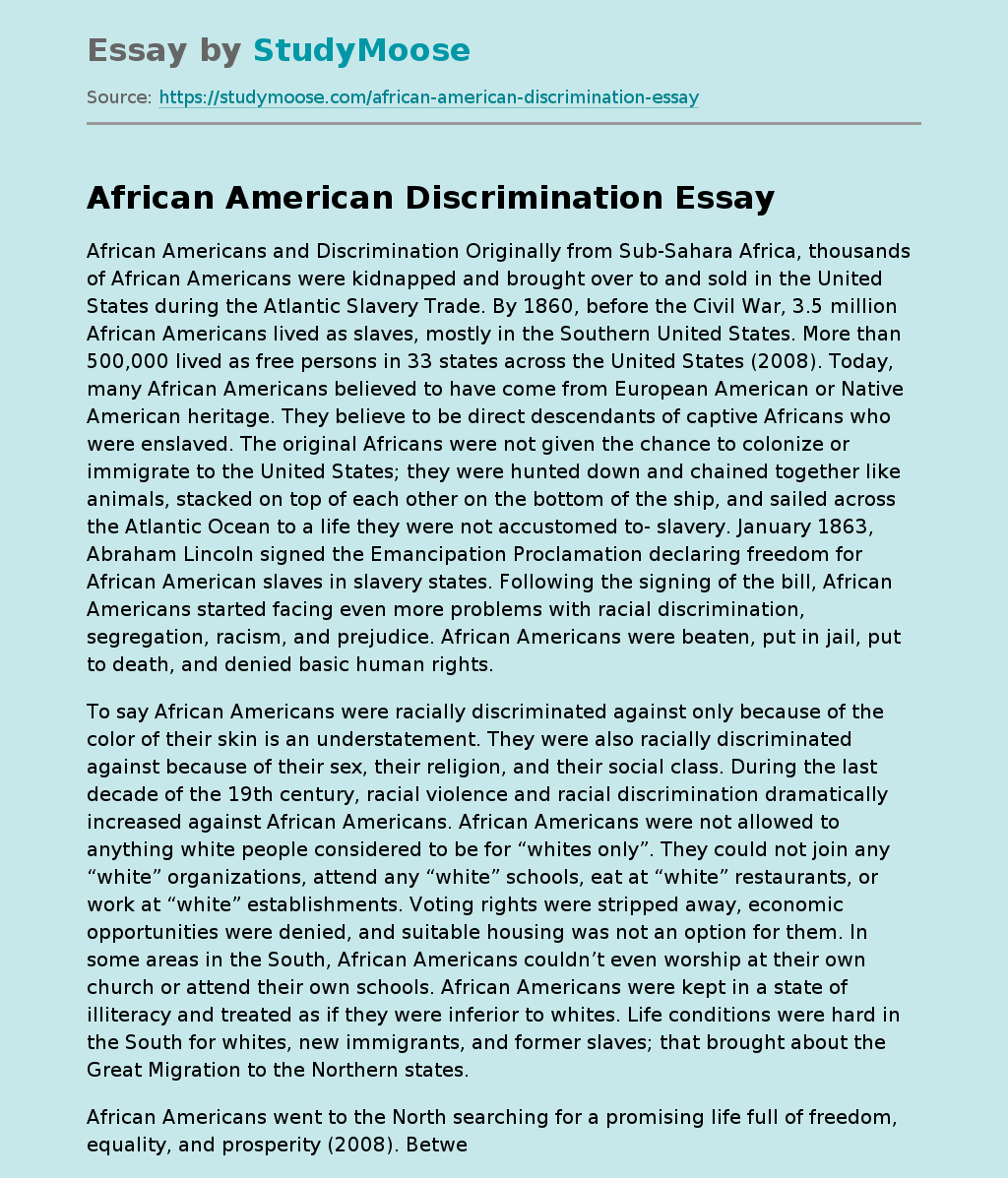