Adolf Hitler bears the prime responsibility for the Holocaust. He was the the author and instigator of the ideology to exterminate the jewish people. In his book Mein kampf, published in 1925, set out his ideas of a pure Aryan German race. The ideas of this pure German race stemmed from the ideas of the Eugenics Movement which was started back in the late 1800’s. Eugenics was a practice that aimed to improve the human race by controlling who was allowed to give birth.

Don't use plagiarized sources. Get your custom essay on
“ Adolf Hitler and Holocaust ”
Get custom paper
NEW! smart matching with writer

This meant that people with weaknesses would not be allowed to give birth and only people with desirable traits or heritage could have offspring.

Hitler used this idea and expanded it. His idea was to not only to disallow people of inferior worth to have children, but undesirable people were to be exterminated. He wanted to eliminate Jews from Europe as well as other people such as gypsies, homosexuals, sick and disabled people. Although Hitler was responsible for initiating these ideas were accepted and adopted by the German people who voted him into power.

The Nazi Party and, particularly the higher ranking officials believed in his ideas absolutely. They were blinded by their belief in him and adopted this racial hatred as their own. They became fanatical in their following of the ideals and did everything in their power to make them happen. Without the people’s following of him, Hitler would not have been able to put his ideas into practice. The building of the death camps and the rounding up of the Jew’s all needed manpower to carry out.

This was done by Nazi officials and soldiers, particularly the SS (Stormtroopers)and the Wehrmacht.

Most of the general public had no idea of what was going on and the scale of the killings, but there were people in the know and they did nothing to stop it. Other countries were informed of the atrocities that were happening, but they either didn’t believe it, or decided to turn a blind eye. They must bear part of the blame of letting such a horrific thing happen in modern times.

Adolf Hitler and Holocaust. (2020, May 11). Retrieved from http://studymoose.com/adolf-hitler-and-holocaust-essay 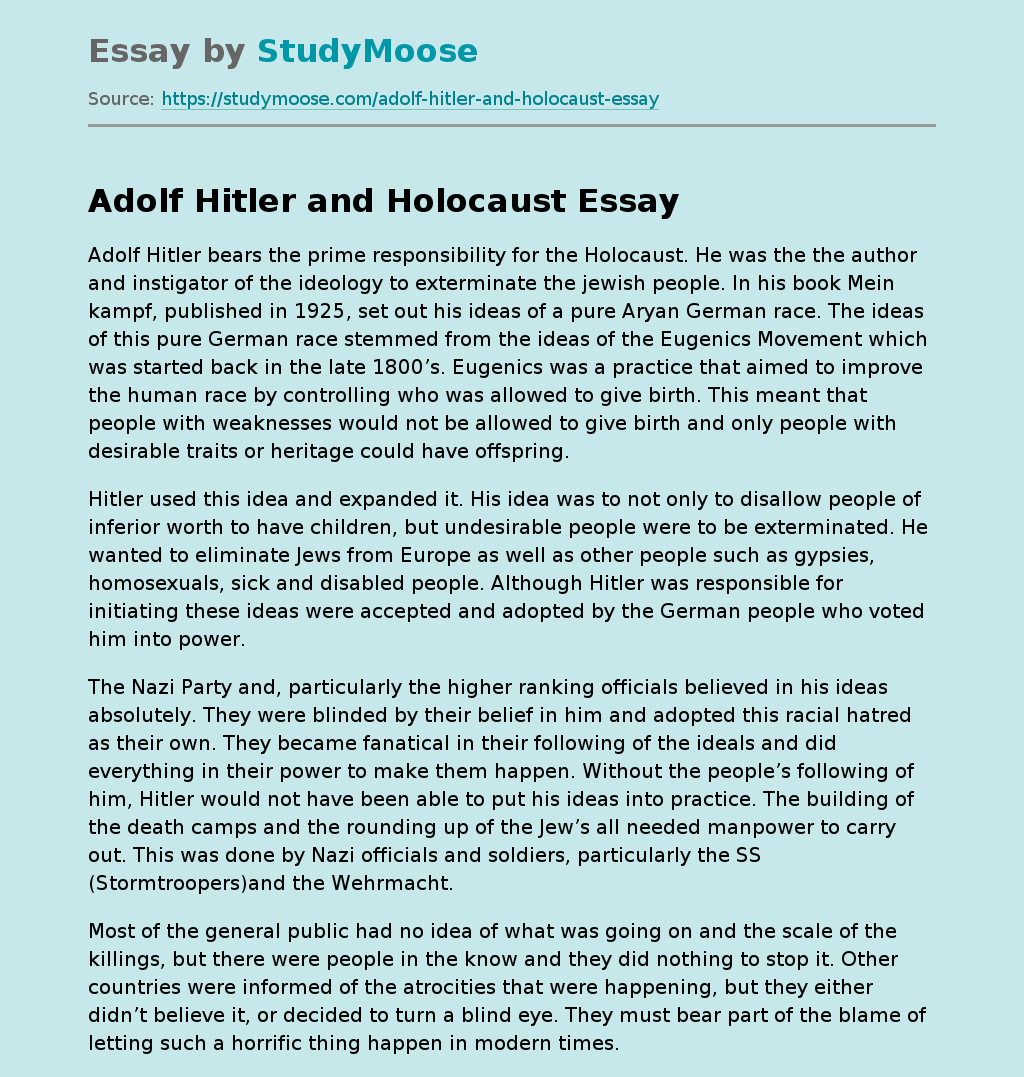