Choosing a Fortune 500 Company was not an easy task. The business world is so new to me and it will take me time to learn the significance of such companies. I decided to choose a company that I was both familiar and interested in. My goal is to get into sports marketing with a reputable company. Having played soccer through college and two years after Adidas is a company I am very familiar with. Additionally, TaylorMade is part of the Adidas Group.

I am an avid golfer who refuses to play anything but TaylorMade and have a fair amount of knowledge about their company and products. Additionally, I am considering employment with the Adidas Group after completing of my MBA.

Adidas has a very interesting history. In 1925 Adolf “Adi” Dassler designed his first pair of shoes in a small German village named Herzogenaurach. By 1949 Adolf had created his own business while using the three stripes on his shoes. The tree stripe has become one of the biggest trademarks in the world.

Today, Adidas Group is one of the most reputable sporting companies in the world controlling companies such as Adidas, Reebok and TaylorMade-Adidas Golf. Every year Adidas Group continues to grow and remain competitive with new and eye catching designs, clothing and equipment.

Adidas Group A SWOT analysis is a straightforward model that provides direction and serves as a foundation in the development of marketing plans. A SWOT analysis tells us of an organizations strengths, weaknesses, opportunity and threats.

After researching the Adidas Group, I have come to many conclusions.

Adidas Group’s SWOT analysis was easy because of how large and successful the company is. It was east to find the strengths and opportunity but also as easy to find the weaknesses and threats.

-The company has rich history and reputable name since 1924 -Sponsors major sporting events like the World Cup and Olympics along with some of the most popular teams and athletes in the world. -Technological engineer experts: This allows Adidas to develop their product quickly in a competitive market while consistently remaining one of the top sporting companies in the world. -Adidas Group is internationally recognized and loved.

Additionally, Adidas Group can produce different styles fitting to the area of region because of their engineer experts on staff. -Able to reach all people rather than groups of people because of their diversified products. Adidas Group products range from running shoes, cleats, equipment needed for any sport, clothing and accessories to name a few. -Adidas Group is a multicultural organization. They have an understanding of culture and race allowing them to respond adequately to issues that may occur not only in the workplace, but also in the surrounding communities.

-Product can be pricey because of advanced technology and methods of production. -Competition is tough. Companies like Nike are competitive in all aspects and lead to frequent customer switching.

-Adidas generates up to 60 new foot-friendly designs a year making them consistent and ahead of the competition. -Associated with elite professional teams, players and clubs around the world. -Because of all the camps and academies Adidas Group is established in all sports and continues to build their reputation and their product. -Because of company policies and relations with employees, there is a low turnover rate with Adidas Group.

-Competitive companies, such as Nike offers the same product and are also reputable. -Fake products with their names on it. A great deal of people produce false equipment and put an Adidas Group stamp on it. This takes money from them and also can tarnish reputation if false product breaks. As a mutual fund manager I would invest in Adidas Group immediately. They are cleaning out their competition and have been increasing statistically for some time now.

Their recent sponsorship of the London Olympics and Euro 2012 showed a 30% increase in this year’s first-half net income (Mariah, 2012). Adidas Group is showing initiative and a desire to grow making it clear that they have every intention to become the world’s market leader and by 2015. Nike, who use to dominate Adidas Group in the business world, has lost ground. Currently Adidas Group is only one percent shy of Nike’s market share. Adidas has closed that gap significantly from five years ago and is showing no sign of slowing down (Marian, 2012).

One of my concerns with Adidas Group was how would they do now that the Olympics are over with. The third quarter this year still showed a growth of 4% sales. Each company part of Adidas Group increased in financial profit with the exception of Reebok (Adidas Group, 2012).

A demonstration of the recent success by Adidas Group is evident in the facts. Financial income grew 25% while expenses decreased 13%. The net income attributable to shareholders went up 22%. Group inventories and accounts receivable all saw an increase while their net borrowings decreased (Adidas Group, 2012).

Herbert Hainer recently explained that this year’s results have set the path to their 2015 goal, to be number one. He explains that statistics show that the direction they are heading will continue to lead to growth. Based on the facts, he predicts at least a 9% increase in total revenue in 2013 (Adidas Group, 2012).

It is an easy decision to invest in Adidas Group. The only weak link in the group is Reebok. Adidas Group did not focus on Reebok and there has been a commitment in recent years to re-establish their reputation. Even with a decrease in Reebok, Adidas Group is growing. It will only get better when Reebok gets better.

The external stakeholders also play a significant role in the success of Adidas Group. These stakeholders consist of the opinion-formers, customers, environmental custodians, suppliers, community organizations and different non-profit organizations (Engaging our Stakeholders, 2010).

Internal stakeholders such as shareholders obviously want to see profit. They want to make sure that there is constant engineering within their company to remain competitive with their competition. Employees will want to the environment in which they work to continue to improve. They will want Adidas Group to continue improving their pay (What do Stakeholders Want, 2011). An external stakeholder like a supplier for example, needs Adidas Group to succeed because they will continue to supply them and profit. Suppliers and similar stakeholders expect prompt payment from Adidas Group as well.

The internal stakeholders expressed a desire to see more interaction from customers on their website. He believes that building a platform would create interaction and lead them in the direction the customer wants (Godelnik, 2011). Both internal and external stakeholders have one thing in common, the desire for top of the line products. As long as Adidas Group continues to exercise the desire to be number one they will continue to make some of the best product in the world. With superior product comes revenue from happy customers.

I truly believe that Adidas Group is meeting the needs of their stakeholders. I will even say that over the past five years they have exceeded their expectations and set a new standard in the business world. Not only have they established an excellent reputation in the sporting world, but also with the public around the world with their clothing, shoe and accessory line. Adidas Group is very proactive with their stakeholders by holding formal stakeholder consultation meetings with workers, union representatives, NGOs and suppliers around the world. Additionally, Adidas Group makes available the dialogue meetings through a download on their corporate website. 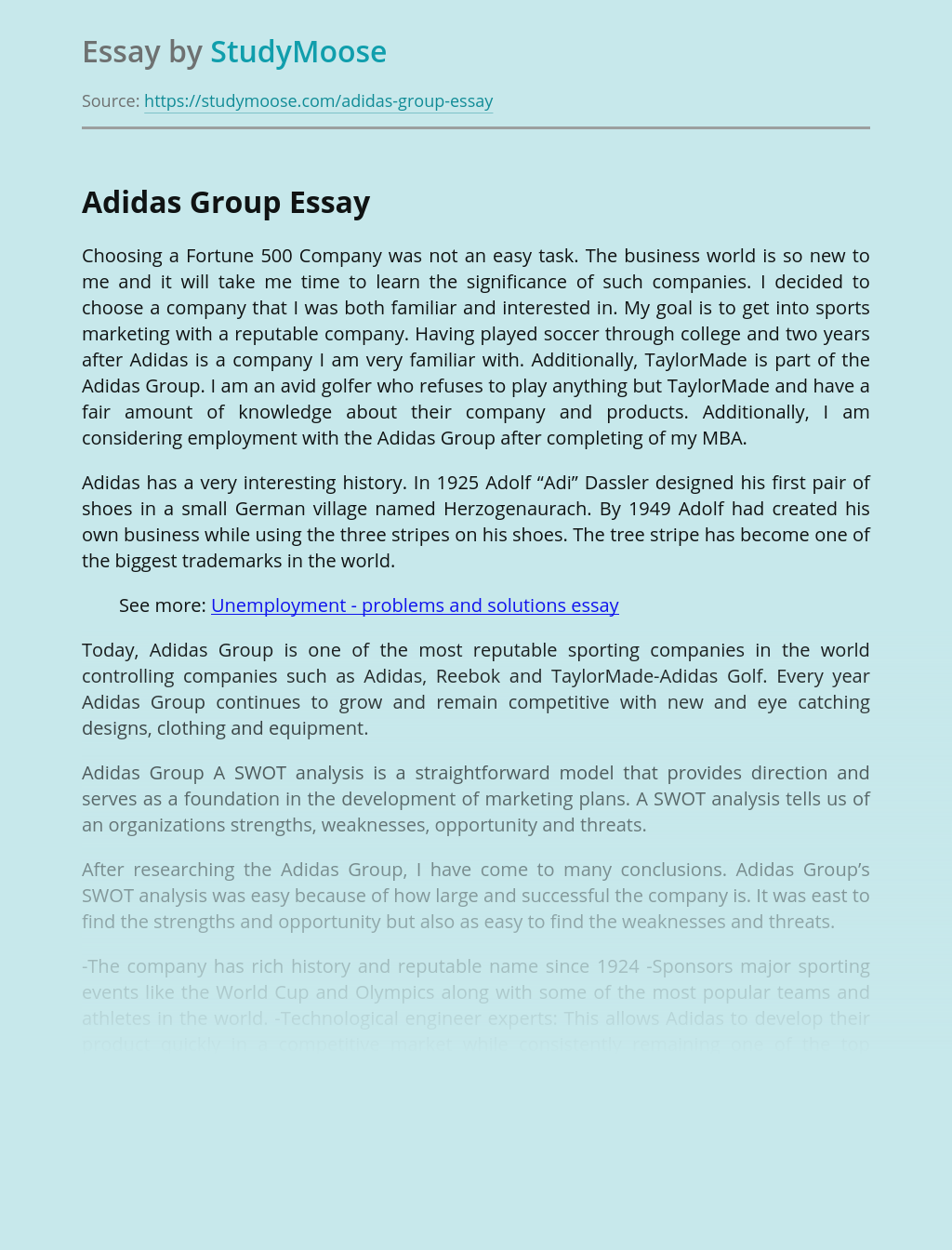