The LEGO Group, which is headquartered in Billund, Denmark, is one of the largest toy manufacturers in the world. LEGO’s main products have bee~ the bricks and figures that children have played with for generations. The Danish company has experienced sustained growth since its founding in 1932, and for most of its history its major manufacturing facilities were located in Denmark. In 2003, LEGO was facing tough competition from imitators and manufacturers of electronic toys.

In an effort to reduce costs, the group decided to initiate a gradual restructuring process that continues today.

Turn in your highest-quality paper
Get a qualified writer to help you with
“ The LEGO Group Analysis ”
Get high-quality paper
NEW! AI matching with writer

In 2006, the company announced that a large part of its production would be outsourced to the electronics manufacturing service company Flextronics, which has plants in Mexico, Hungary, and the Czech Republic. The decision to outsource production came as a direct consequence of an analysis of LEGO’s total supply chain. 1b reduce labor costs, manually intensive processes were outsourced, keeping only the highly skilled workers in Billund.

Additionally, production had to be relocated to places closer to its natural markets. As a consequence of all these changes, LEGO transformed itself from a manufacturing firm to a market-oriented company that is capable of reacting fast to changing global demand. LEGO’s restructuring process, coupled with double-digit sales growth in the past few years, has led to the company’s expansion abroad and made its workforce more international.

These changes presented supply chain and human resources challenges to the company.

The supply chain had to be reengineered to simplify production without reducing quality. Improved logistics planning allowed LEGO to work more closely with retailers, suppliers, and·the new outsourcing companies. At the same time, the human resources (HR) department needed to playa more strategic role inside the company. HR was now responsible for implementing effective policies aimed at retaining and recruiting the most qualified employees from a diversity of cultural backgrounds. 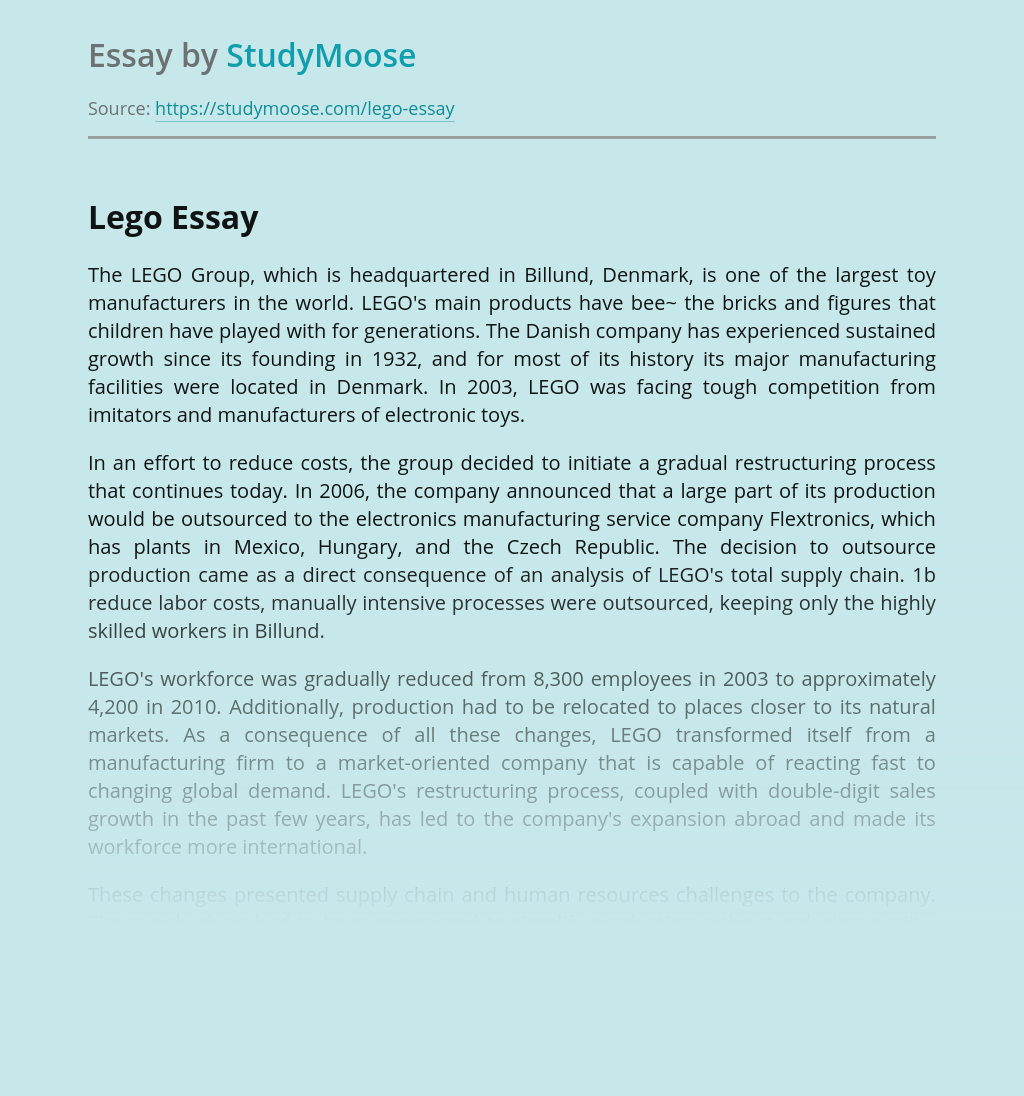 Turn in your highest-quality paper
Get a qualified writer to help you with
“ The LEGO Group Analysis ”
Get high-quality paper
Helping students since 2015
Stay Safe, Stay Original