Q 1. What led the LEGO group to the edge of bankruptcy by 2004? By the end of 2003 Lego was already facing crisis owing to dipping profits and declining market pool for toys. Lego had planned to expand into markets beyond building toys and needed huge investment to be made in it. But it found difficult to compete when fad players and other toy manufacturers were giving them stiff competition in a market that already was supposed to be giving lesser returns every year.

Turn in your highest-quality paper
Get a qualified writer to help you with
“ Lego Case Study Analysis ”
Get high-quality paper
NEW! AI matching with writer

This was mostly due to factors out of the control of Lego and other toy companies because, firstly, a research suggested that the demand of children who were primary customers of these companies were changing rapidly to fashionable and electronic products. They had lesser attention span and looked for instant gratification, and were lesser inclined to play with toys involving physical activity. Also Lego found it difficult to be competitive when its manufacturing base was in European markets while toy companies were moving to Far East and Middle East where labor was comparatively cheaper.

Management move by Lego: After Lego realized that it had to correct its declining profits, it decided to venture into new markets and imitate the success of Disney which had created a brand value for its customers through theme parks, accessories media and video games. Lego created an amusement park called LegoLand Windsor, came up with video games, accessories and robotic toys. This did not work very well for Lego as Disney already had a brand value which it created through its own characters, while Lego was still a toy making company in the minds of people.

It was an early move and the market was not ready for Lego to establish as an entertainment company. Thus profits kept on declining. Lego then focused on improving organization internally to reflect in profits, when it’s COO, Plougmann restructured the organization and tried to turn around the company.

The target was to hire the best talent and improve focus of the company towards innovation and creation of new markets. Layoffs were also done and processes were streamlined to become more profitable. Lego made new theme parks on themes of Winnie the Pooh, Star Wars, Harry Potter. They had profits from some of these but the overall profitability of the company was fluctuating and none of the management moves by the government seemed to get the company back on track. Analysis of why the management moves failed: Lego was focusing its strength in the wrong direction. It was trying to portray itself as a brand image that it wasn’t. Imitating Disney couldn’t have saved it until it had created brand recognition as an entertainment company like Disney.

Also, the company was investing huge amounts of money in making theme parks while it was not financially strong. The problem was that, Lego was making a large number of shapes and components and yet not selling enough toys to make profits. It had 3,560 different shapes several colors. Each of the mold to make the shapes could cost 50 to 300 thousand Euros. This made the company slow in delivering supplies on time. The users already had enough of other options like the fad companies or competitors to fulfill their demand for toys. Lego missed out on correcting its process by making toys more profitably, and rather looked externally trying to emulate Disney. This move brought them to bankruptcy in 2004 and the company fell into a major crisis.

Manage for cash focused on saving the company from bankruptcy and provide it the necessary cash. This was a survival strategy based on focusing on the core strengths. Basically, the company was trying to do too many things at the same time, including surviving a competitive and declining market and also expanding at the same time. The essence of “Shared Vision” strategy was to divide it into stages where the company could focus on survival first and gradually have its stronghold by expanding into new markets. The first step Lego took was to improve the efficiency of its plants and synchronizing its activities to cut down cost on factories, distribution systems, supply, shipping etc. The focus was not on imitating Disney anymore but surviving the market and generating profits.

Effectiveness of this action:

1. Lego focused on its core strengths once again including establishing the brand name, going back to Lego brick games, creating a community around their products to increase participation. 2. The Logoland parks were sold while it kept its stake in profitable Merlin Entertainment parks which generated cash for the company. 3. The focused efforts resulted in greater profits from lesser products. Lego Duplo, Lego City and Lego Mindstorms were the core products generating profits for the company. 4. The management had clear idea of when to focus on business survival and when to go for growth. The growth timeline made company postpone non important expansion plans to later in future. 5. Lego reduced the number of components it produced for the complex toys. This improved its fill rate and reduced delay in delivering supply to the market. Faster sales cycle generated greater profits.

1. Lego decided to shift back its manufacturing from China to its own factories in an effort to reduce the lead time required in maintaining supplies in accordance with the shifting demands of children. The lead time in Chinese factories was 12 weeks and shifting the facilities beack to itself could help Lego push SKUs faster. This was not a good step as it boosted the cost of production for the company which harmed them more than the lead time. 2. The company incurred huge cost in bringing production back to its own manufacturing units in Europe. A lot of cash was invested in re building the capacities while it had to lay off employees in Bilund factory. This could have been avoided.

Overall, the strategy to plan the survival and growth actions worked in the company’s favor and gave it opportunities to expand in new markets and also streamline its own capabilities thus generating more profits. The market share improved and profitability increased. Thus, Knudstorp’s turnaround strategy was overall successful.

Q 3. Should Lego launch the new line of Board games?

Of its history and the various ups and downs that the company faced, and the way it turned around itself, one important lesson we learn from Lego is that it worked best for the company when it focused on its core strengths and developed its capabilities. Lego always has to fight with competitors and fad companies emulating their products but wins on the community building and innovation front. Board games on the other hand do not fit in within this strategy of Lego as they do not provide Lego’s community benefits and can be imitated easily by other players. It will soon turn into a price war which is not Lego’s core strength.

Lego would be better off if it comes up with new Lego building models with technological facelift given in its toys. With the rise in IT and Tech., children these days get more excited about gizmos and technology. Lego can profit from combining its core strengths of making building models with technological embedment in it. This would create a unique selling space for Lego which will be difficult to compete in. The board games definitely do not fit in this strategy of the company and are also very price sensitive. Thus, in my opinion, Lego should focus on its core strengths and not get into the line of Board games. 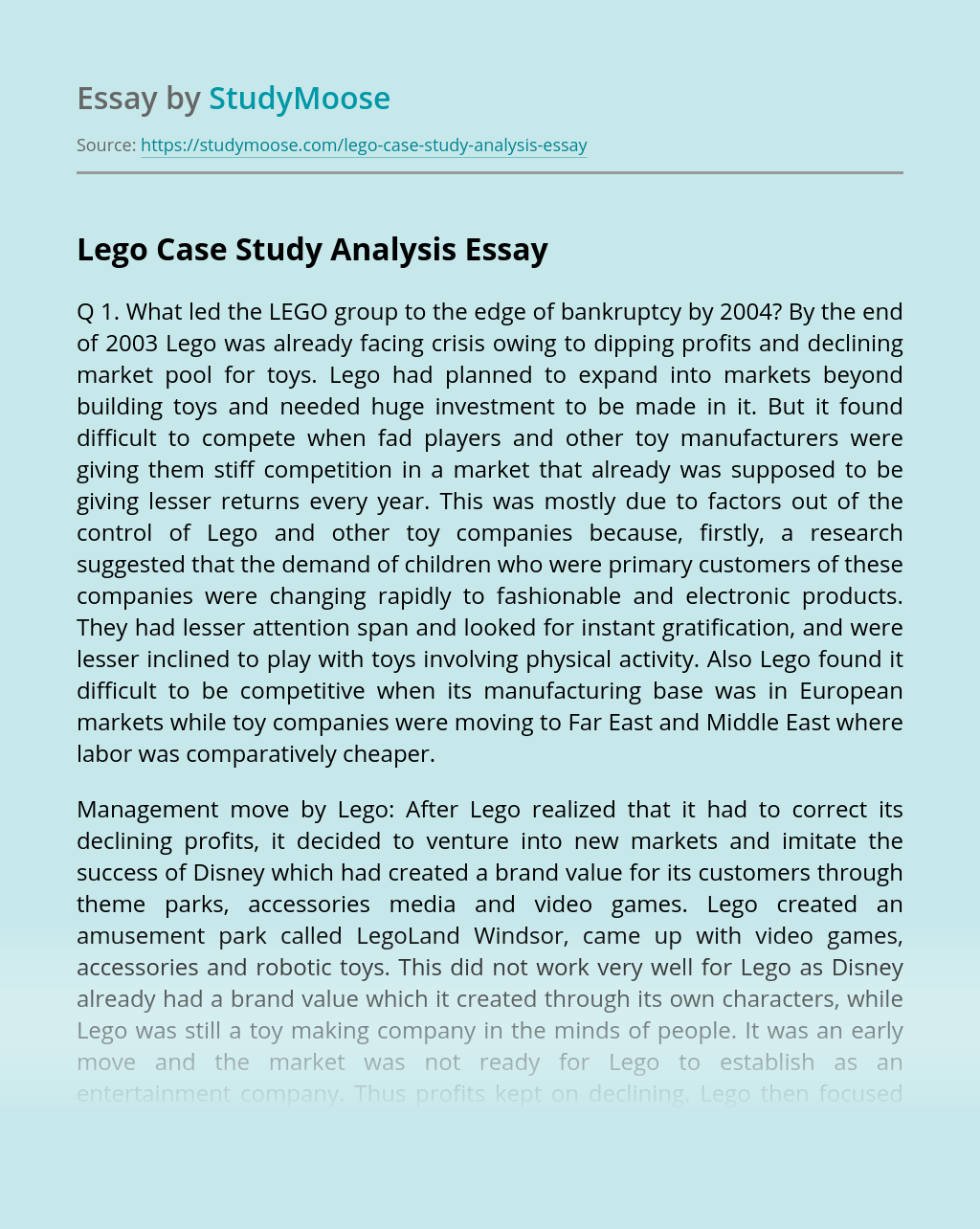 Turn in your highest-quality paper
Get a qualified writer to help you with
“ Lego Case Study Analysis ”
Get high-quality paper
Helping students since 2015
Stay Safe, Stay Original