In the play “Fences” the conflict August Wilson uses most to drive all the other conflicts and elements of the story is Troy vs. himself. Wilson’s intent is to show how racial segregation and injustice can create difficulties in families, a lack of self-esteem, and lead to uncontrollable circumstances. Troy’s, dissatisfaction with the way his life has turned out drives the rest of the conflicts that play out in the other events that take place in the story. Troy’s main dissatisfaction is because he never got a chance to live out his dream of playing professional baseball due to his age by the time black men could play in the league’s although he blamed the problem on racism.

Don't use plagiarized sources. Get your custom essay on
“ Conflict Theme in Play “Fences” by August Wilson ”
Get custom paper
NEW! smart matching with writer

The love for baseball throughout the play by the baseball references he makes and the arguments he makes about how much better of a player than other pro ball players. At the beginning of the play, Troy is not content with his job as a garbage man by his discussion with Bono about how the white men are the only drivers and the black men are the only ones emptying the cans.

Troy is again unsatisfied about the fact that besides his family he has nothing to show for himself. He lives in a house by the grace of his disabled brother Gabriel’s money that him never that he never would have been able to afford otherwise. He always seems to find random things to fuss about because of his self-dissatisfaction.

Troy says how he never wanted to be anything like his father, but what he does not realize is that he is very much like the man he hated so much. Troy ended up in jail for a few years and missing his oldest son’s upbringing due to him killing someone during a robbery. Because Troy experienced these previous hardships, his family must deal with the burden that comes along with his experiences. Troy is constantly disappointed with his son’s because he does not believe they understand the meaning and values of hard work because Lyon plays music and Cory wants to play football. Troy is in constant quarrels with Cory throughout the play until Cory finally leaves home and joins the military just to get away from his father.

Cory tells his parents about an opportunity for a college football scholarship. Troy, however, will not allow Cory to play football due to his own fears of racial discrimination. Troy uses Cory not working anymore as an excuse and eventually tells Cory’s coach that his son is no longer going to be playing football. When Cory finds out, he and Troy get into a fight that results in Troy’s kicking Cory out of the house. Troy and Cory argue about Troy’s actions, but Troy, who is stubborn, does not back down from Troy’s argument and sends Cory to his room.

Wilson wanted to be a writer, but Troy’s mother, who wanted Cory to become a lawyer thought it to be a foolish idea. She later forced him to leave their home due to his defiance and as a result he enlisted in the Army for three years in 1962, but then left after one year and started working different odd jobs. Troy also manages to show disappointment in his marriage, despite how much he says he loves Rose and how she is a great mother, Troy must later admit to his wife that he has been having an affair and that his mistress, Alberta, is pregnant. Alberta eventually dies after giving birth due to complications and Troy must bring his baby daughter Raynell home and ask Rose for help raising her. Because she is a loving and caring woman, she stays in the family home with Troy, but she refuses to accept Troy back into her life.

Troy did all that he could to ensure that his family was taken care of despite his upbringing and background. He worked hard at his job, no matter how much he did not like it, and tried to better himself with the circumstance’s that he is becoming the first black garbage truck driver in Pittsburgh, but his happiness didn’t last long. This event all boils down to how dissatisfaction with one’s self can enviably cause behaviors that can destroy a person’s life and the lives of those around them. 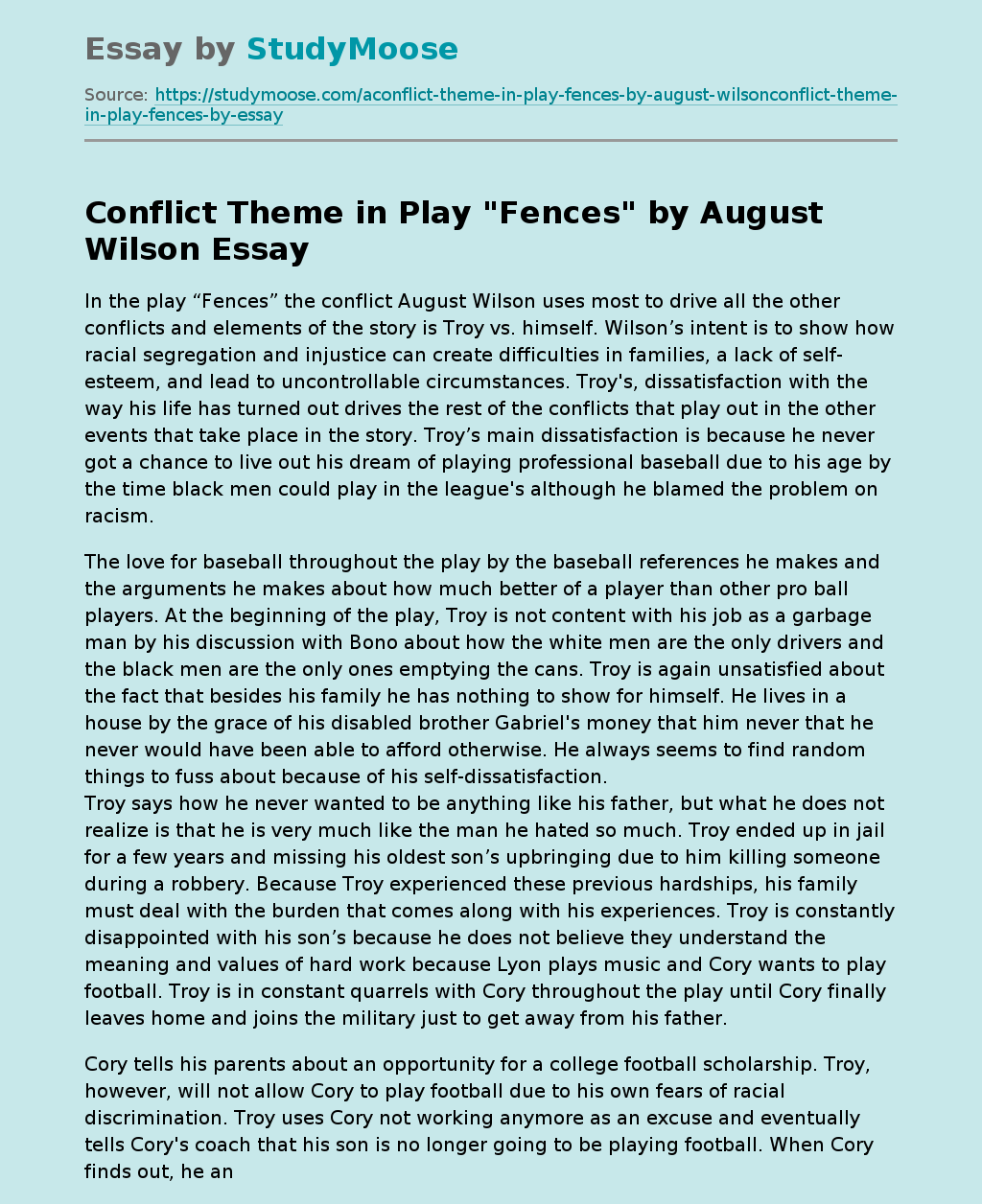