Alfred Hitchcock, born in 1899 in England, remains a prominent figure in the world of cinema. Hitchcock’s passion for film began in his childhood with his first job as writer of the title cards for silent films and, later on, becoming a director. Influenced by his Catholic upbringing, Hitchcock developed a sense of guilt and sin throughout his life with which he portrays in his work (Kehoe N. P. ). As the leading director in the 1930’s, Hitchcock set the standard for international intrigue with his classic thrillers.

Don't use plagiarized sources. Get your custom essay on
“ Achievements of Alfred Hitchcock ”
Get custom paper
NEW! smart matching with writer

His mastery of suspense and his unprecedented technique still makes him one of the most popular and celebrated film directors of all time (Flint N. P. ). Alfred Hitchcock has numerous accomplishments; the most noteworthy being his films Vertigo (1958), Psycho (1960), and The Birds (1963). Alfred Hitchcock’s Vertigo (1958) raises performance to such a personal level that it addresses the nature of human personality itself (Sterritt 113). The protagonist in the film is John “Scottie” Ferguson, a former police detective, who has been forced into early retirement due to vertigo and depression.

Scottie is then hired as a private investigator to follow a woman, Madeleine Elster, who had been behaving peculiarly. Vertigo is a film that operates on emotions and negative feelings. Hitchcock’s use of “fade to black” illustrates his tendency to emphasize the film’s most emotionally meaningful moments with a touch of theatricality. This technique intensifies the otherworldliness that becomes Vertigo’s most significant quality (Sterritt 92).

Vertigo has a clear association with insanity; Michel Foucault, a French social theorist, states that it “affords the delirious affirmation that the world is really ‘turning around,’” such delirium being “a necessary and sufficient reason for a disease to be called madness” (Sterritt 98).

The repeated shot of Scottie’s troubled gaze into an abyss below solidifies the ingenuity and peculiarity of Vertigo (Sterritt 82). This shot provides a visual approximation of the psychological condition- extreme dizziness and disorientation- that is affecting Scottie.

Hitchcock enhances the approach on point of view by providing information to the audience “through Scottie’s eyes” (Sterritt 83). Vertigo’s conclusion is unusual for its time because of its depiction of a neurotic hero, not a common feature in mainstream cinema (Sterritt 92). Alfred Hitchcock reached his artistic peak with his filming of Psycho (1960), which set a new level of acceptability for violence, deviant behavior and sexuality in American films (Flint N. P. ). The protagonist Marion Crane ends up at a secluded motel after embezzling money from her boss. She finds herself faced with the motel’s disturbed owner, Norman Bates.

Hitchcock described the beginning of Psycho as a way of distracting the audience’s attention “in order to heighten the murder” (Baer N. P. ). One of the main themes in Psycho is voyeurism or the practice of spying on people engaged in intimate behaviors. Many critics feel that the film not only maintains a general sense of voyeurism, but a specific indictment of voyeurism with the audience- what Hitchcock called “Peeping Tom audiences. ” Psycho manipulates the audience in supporting a thief, Marion Crane, which allows the viewers to become personally involved in the character’s guilt.

Joseph Stefano, a writer for Hollywood films, states “In a more general sense, I think a fundamental essence of watching films is voyeuristic because we intrude so deeply into the characters’ lives—while sitting in the dark. It’s not necessarily sexual, although it can be, but its power to involve us with the characters is incredible” (Baer N. P. ). Alfred Hitchcock introduces a new narrative dimension in Psycho by including his personal appearance in the film; He faces away from the camera indicating his control over the film and keeping with theme of voyeurism (Sterritt 103).

Hitchcock viewed his actors’ performance as the very essence of human identity; Psycho’s character Norman’s performance being the most profound of all of Hitchcock’s performances. Norman gives himself up to his character by assuming her voice, her appearance, her movements, and her thoughts. Hitchcock uniquely displays Norman’s performances with his use of window/curtain imagery. The windows and curtains indicate that the viewers are a “private audience” (Sterritt 113). By distancing the audience from the characters, Hitchcock achieves both an alienation affect and a sense of intimacy between the character and the audience (Sterritt 114).

Alfred Hitchcock’s The Birds (1963) is the most radical of all his films because of its refusal to return the audience to normality (Sterritt 121). When asked what the film was about, Hitchcock replied “people’s ‘lack of concern about the fact that nature can turn on them’” (Abrash 153). The Birds takes place in Bodega Bay, California, which suddenly undergoes a series of widespread and violent bird attacks. The Birds is a follow-up to Psycho with Hitchcock attempting to go further beyond the boundaries of rationality.

Not only does the film display the irrational, but it also becomes the irrational by prohibiting natural causes to bring real and fantastic elements together. With the filming of The Birds, Hitchcock violates the rules of classical cinematic storytelling in order to actualize the fears that lurk in everyone’s unconsciousness (Sterritt 121). With the lack of a conventional ending, The Birds represents Hitchcock’s ultimate gesture of despair over the power of the characters. The protagonists remain in danger, the antagonists gain even more power, and the emotional relationships of the characters are only partially resolved.

The resulting visual allows the characters to work towards a better world (Sterritt 124). The film critic Robin Wood’s interpretation of The Birds was “a concrete embodiment of the arbitrary and the unpredictable […] a reminder of fragility and instability that cannot be ignored or evaded and, beyond that, of the possibility that life is meaningless and absurd” (Abrash 154). In carefully balancing the ordinary and the bizarre, Alfred Hitchcock was the most noted juggler of emotions in film history.

The majority of his films were meticulous creations of nightmares consisting of peril and pursuit relieved by unexpected comic ironies and absurdities. Hitchcock’s style of always stressing imagery over dialogue gave him a distinct reputation. All of these achievements allowed Alfred Hitchcock to be the recipient of the Irving G. Thalberg Memorial Award of the Academy of Motion Picture Arts and Sciences in 1967. When asked what his approach was on filmmaking, Hitchcock responded with “some films are slices of life, mine are slices of cake” (Flint N. P. ). 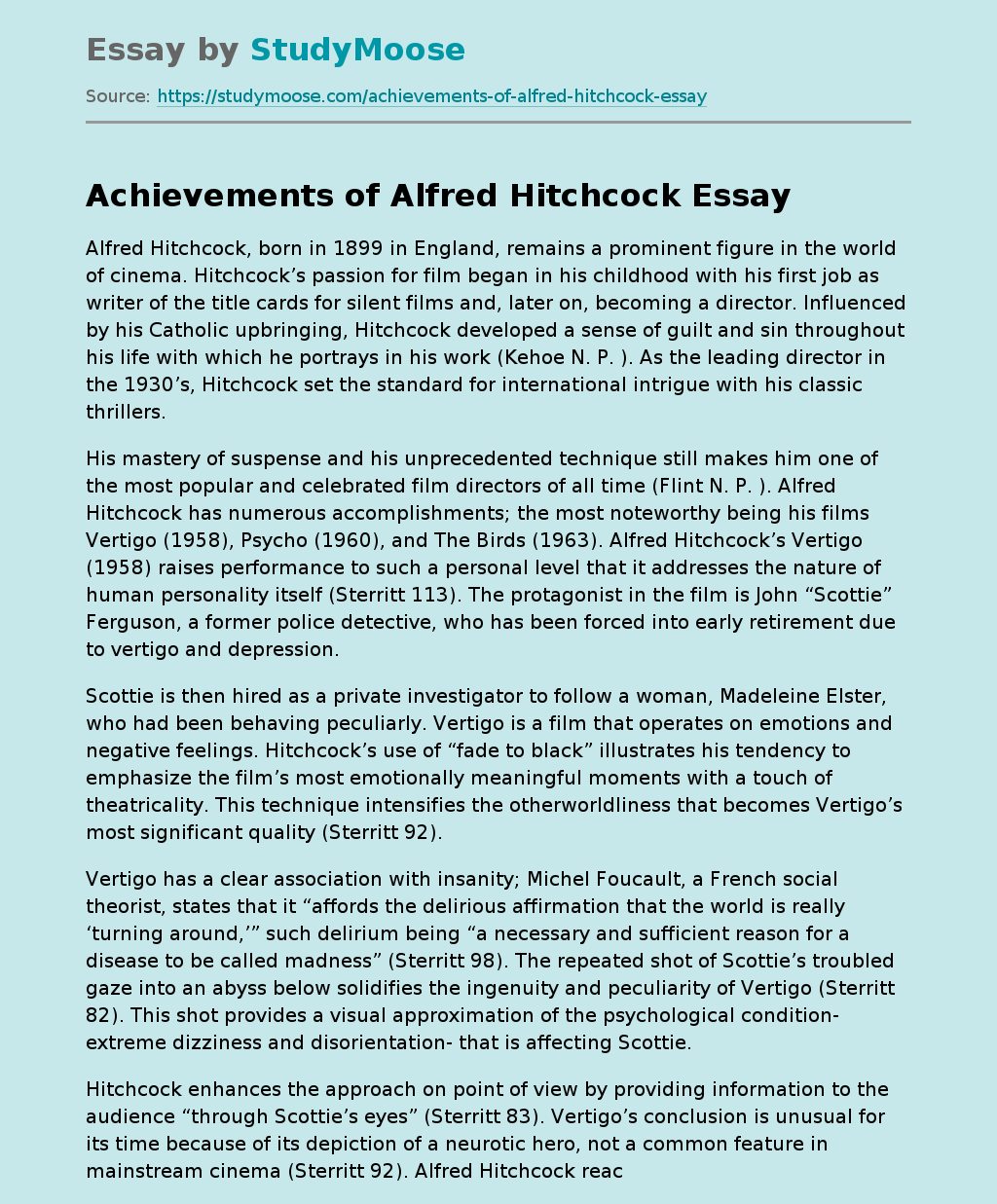