A World Without Friction

Although friction may seem like a minor issue, its absence would chance life as we know it. There would be many negative effects of this like not being able to gain traction on any surface and your ipods earplugs always falling out. Also, there would be many positive effects, such as eliminating the need for coolant in engines and lubricant in machines. Moreover, the absence of friction would be both bad and good.

Without friction, many obvious things which we take for granted would not function the way we like.

Turn in your highest-quality paper
Get a qualified writer to help you with
“ A World Without Friction ”
Get high-quality paper
NEW! AI matching with writer

Shoelaces would untie themselves, zippers would always unzip (unless they were upside-down), nails, screws, nuts and bolts would work themselves loose, and driving as we know it would be impossible. Objects would be unable to gain traction on any surface. Therefore, the only way to move without friction would be through force of reaction. One would need to push something to get motion in opposite direction. Then even to stop, one would need to collide with something.

Several ramifications that probably dont come readily to mind are the effects on the human body, thermodynamics and plate tectonics.

Since friction creates heat, without friction there would be no heat, therefore, no laws of Thermodynamics (Goulding). Plate tectonics would also be drastically altered in the absence of friction. Currently the plates that make up the surface of the earth are sliding over each other at an incredibly slow rate. Without friction, the movements of these plates would rapidly accelerate. Continental drift would be accelerated and continents would collide and this would lead to disaster.

Not all of the changes brought by the absence of friction would be bad, however. As stated above, some advantages of a frictionless world would be that engines and machines would no longer need coolant and lubricant (Goulding). Also, whatever moving vehicles that were invented in this frictionless world would not have to contend with drag and air resistance. An interesting change that would come about is that all metals would become superconductors (Krim). Superconductivity is a phenomenon occurring in certain materials generally at very low temperatures, characterized by exactly zero electrical resistance (Superconductor). Since friction creates heat, there would be no heat so the very low temperatures would be present. Also, no friction means there would be zero electrical resistance (Krim). Since there are many applications of superconductivity, this would be beneficial.

Overall, the absence of friction would cause many changes: some good, and some bad. On the whole, however, life would probably be more difficult without friction. The biggest problem would be the absence of heat. Without heat, humans and most species of life would die. Aside from that, movement would be difficult and the human race would die out eventually anyways due to the fact that we could no longer procreate. I would not want to live in a world without friction.

A World Without Friction. (2016, Aug 03). Retrieved from https://studymoose.com/a-world-without-friction-essay 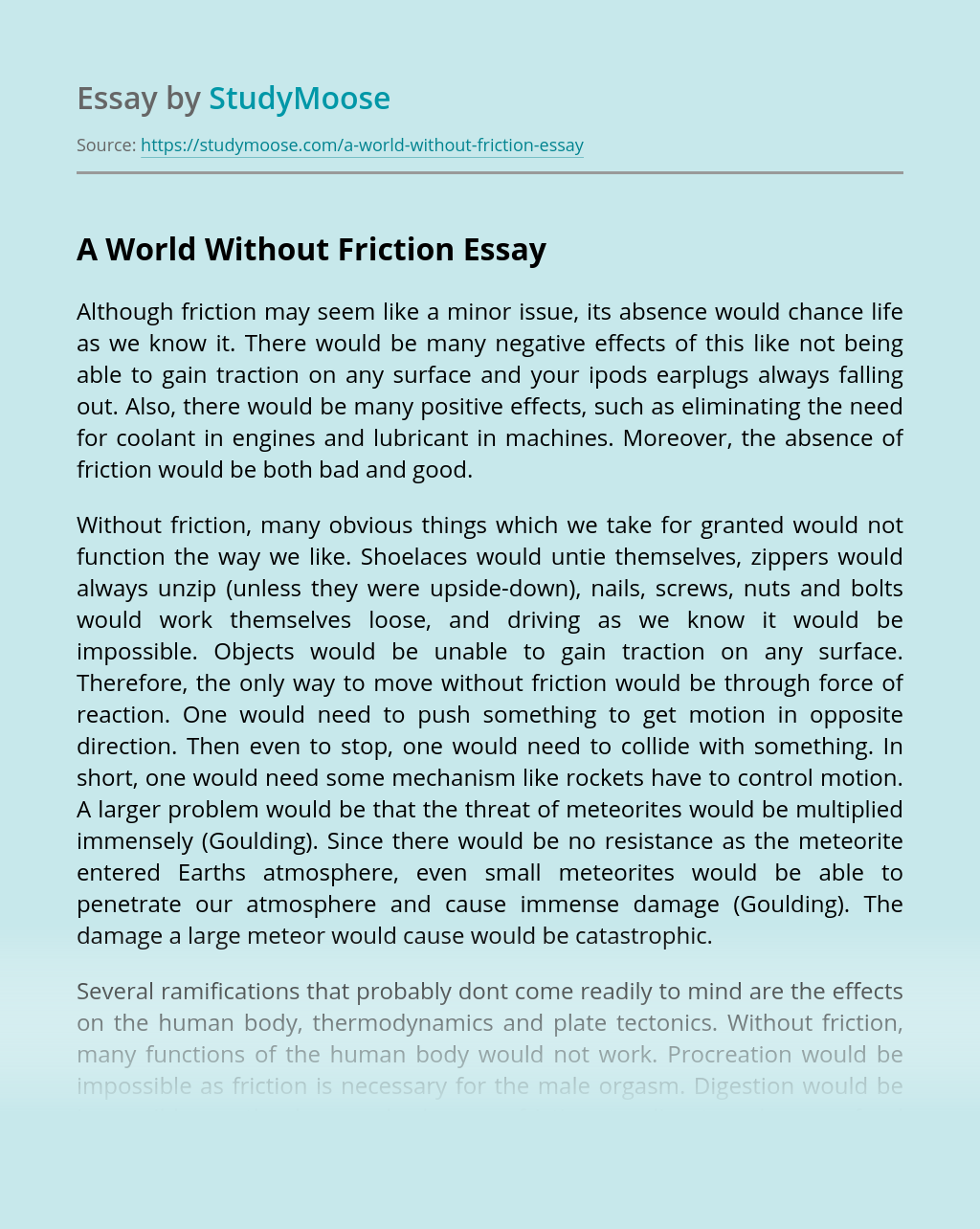 Turn in your highest-quality paper
Get a qualified writer to help you with
“ A World Without Friction ”
Get high-quality paper
Helping students since 2015
Stay Safe, Stay Original