A visit to Subir Raha Oil Museum at ONGC

As a part of the curriculum of the programs offered at UPES, the students of first semester MBA Energy Trading and MBA Oil & Gas were taken to Subir Raha Oil Museum, ONGC in Dehradun. Being the students of the petroleum industry, this visit gave us a rich and holistic picture about how oil it is created in the nature, how various methods are used to detected it, the various challenges which the industry faces during its extraction and processing, how oil is refined and finally how it is effectively distributed via various means.

Don't use plagiarized sources. Get your custom essay on
“ A visit to Subir Raha Oil Museum at ONGC ”
Get custom paper
NEW! smart matching with writer

Along with all this, the visit also gave us an in depth picture on how an oil industry functions around all these areas. We learnt about the intrinsic details of drilling & refining of oil and also about how the life is in offshore drilling platforms like the “Jack-Up Rig”, through video films. Accompanied with our faculty Dr. Somya Sharma, Course Coordinator of MBA Energy Trading, the students were very excited to know the details of the oil industry which in this museum, was depicted in innovative ways and with various working models which really grasped our attention.

All in all, the visit was enriching and brought us closer to the industry. ONGC is the foremost exploration and production company in India. It is responsible for most of the exploration effort, established reserves and oil and gas production in India. ONGC possesses the fiscal, technical and managerial strength to rank as a world-class oil and gas company.

Describing their Museum in detail, it was inaugurated on 14th August 2005. Earlier it was The headquarters of the Oil and Natural Gas Corporation Limited and this was set up in Tel Bhawan also known as Patiala House, at Dehradun in 1956. The place was once the palace of the maharaja of Patiala house and was brought by ONGC for an amount of INR 6 lakhs.

The museum is divided into different sectors of the oil industry. First section told us about what oil is and its vast history. It refreshed our knowledge on how oil is formed on earth, the various grades of oil found in different places and how it gets deposited in various traps in the earth’s crust. We also saw a Foucault pendulum which shows the indubitable fact of earth’s endless rotation about its axis. In this section, there were samples of different types of crude oil and several charts explaining their qualities at different temperature and the viscosity effect they exhibit while transporting the respective crude oil. The second section gave us an insight on the exploration and production of oil.

Here we were shown scaled down models of various types of rigs and the ships used by ONGC for the E&P activities. These models were enclosed in aquariums with exotic fishes in it, which really fascinated us. Third section told us about the transportation methods and refining technologies used in this industry. An extensive description was provided about various IT technologies used by the ONCG in every aspect of their activities. After that there were several kiosks set up which explained about the different distillates obtained from the crude oil and the various catalysts used to obtain those distillates. A beautiful working model was also present which depicted the cracking of the crude.

After the above technical section, we came across an exhibit which showed the several of the ONGC’s refineries both existing and upcoming, marked on a detailed map of our country. There were also several charts explaining the various safety policies and the extreme measures which the ONGC takes in order to protect their employees and the environment. We were also given an insight into the future plans and goals of ONGC, wherein they are planning to venture into the field of several new fuel types like the coal bed methane, gas hydrates under the ONGC VIDESH LTD program.

The rest of the section told us about the infrastructure of ONGC, the vast assets and basins they own and the several services they provide in petroleum industry. There was an attractive display of how the oil industry had influenced the world of philately in various nations. And also, there was an amazing exhibits of fossils from pre historic era and an amazing collection of unique rocks like the flexible rock – “Itacolumite”.

Outside the museum, there was a incredible display of several types of drill bits, a christmas tree, several types of blow out preventer, a coiled tubing unit, a sucker rod pump and a thumper truck. All of this, not only makes this museum, the first compressive museum on oil in the entire nation but also a pioneering ecology of the oil industry in the entire sub-continent. It was a cornucopia of information on oil industry from which the students of the MBA Energy trading and MBA Oil & Gas immensely benefited from.

A visit to Subir Raha Oil Museum at ONGC. (2016, Apr 24). Retrieved from https://studymoose.com/a-visit-to-subir-raha-oil-museum-at-ongc-essay 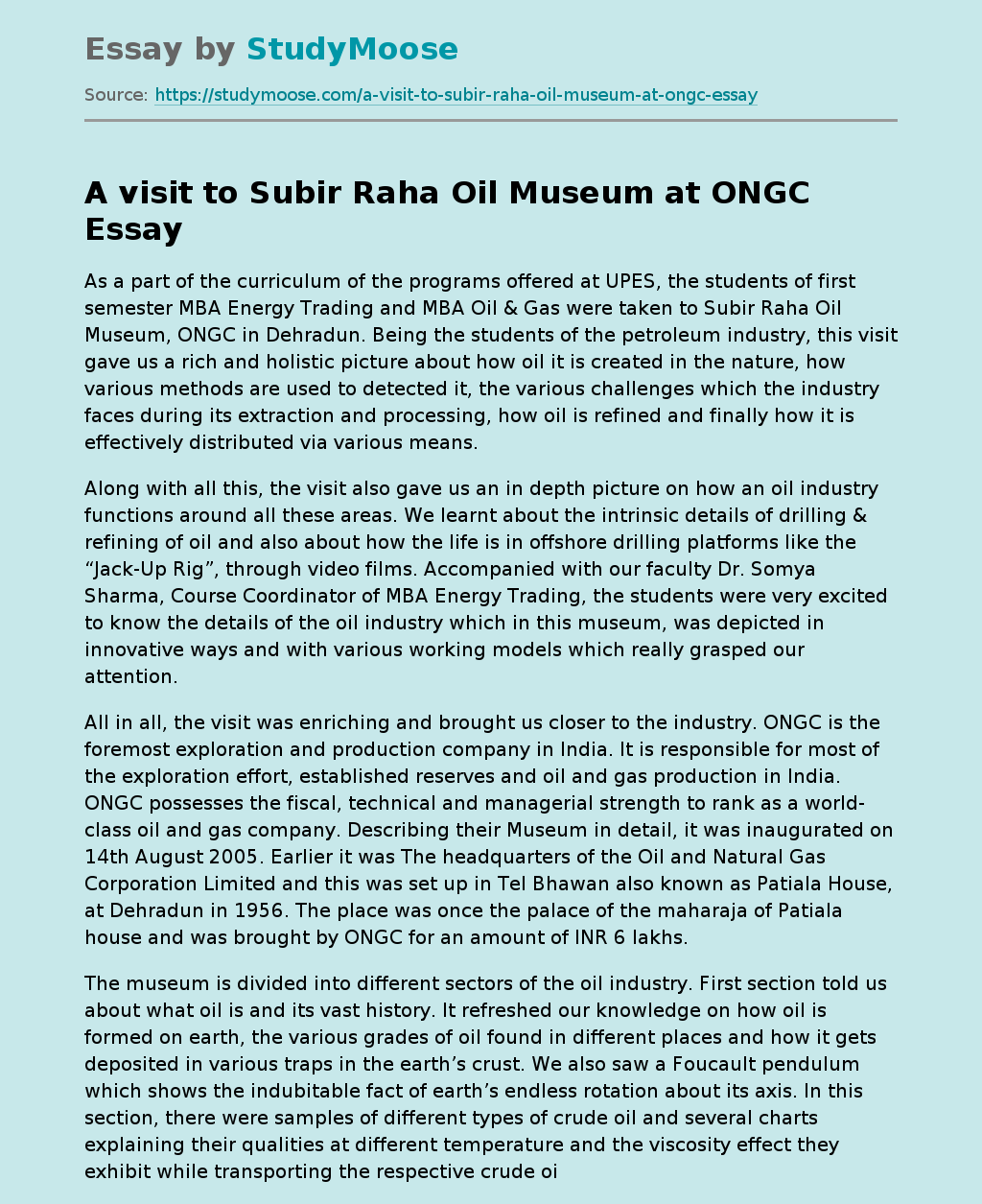