The Museum of Vain Endeavours Summary

The narrator is unknown and we aren’t sure whether the narrator of this particular short story is a female or a male, but I would assume the narrator is a female because the author is a female and it sounds more like a feminine story. The museum itself was a forgotten place on the outskirts of the city where it doesn’t seem appealing at all. It is built on waste ground where rubbish is scattered all over the place and is infested with many cats.

Don't use plagiarized sources. Get your custom essay on
“ The Museum of Vain Endeavours Summary ”
Get custom paper
NEW! smart matching with writer

You would think the area around the museum was deserted. In 1946, the museum was introduced as part of the city’s new exhibition. The protagonist loves spending every afternoon in the Museum of Vain Endeavours. She is the usual and only visitor who is interested in reading about the different Vain Endeavours and she is specifically looking for one kind, but she never mentions what she is looking for. This museum contains many volumes of historical failed attempts, which are also dated to the present, that are made by people who continue to recreate them.

Since she’s the only visitor, she always attracts the attention of an attendant, Virginia, who is the only employee around who works at the museum. Virginia gives to her different catalogues of Vain Endeavours recorded by specific years. These Vain Endeavours are specifically grouped first by year, letters, and then by numbers. After she returns the catalogues to Virginia, she’d usually contemplate about what she read as well as listening to Virginia’s insight about the difference of each year’s history.

She would always think to herself about how curious it is for people to repeat Vain Endeavours, which is the repetition of many failed attempts, and if it were to be written, it would take up too much space. Sometimes she would talk aloud about some stories of Vain Endeavours from the book to Virginia.

An interesting fact that Virginia shares was that only a tiny percentage of all the Vain Endeavours that occur are recorded in the museum. Why? First, the administration doesn’t have enough money for funding and it is almost impossible to publicize the museum’s work because no one ever payed any attention to these topics. Secondly, because the numbers of Vain Endeavours continue to grow, the requirement of willing staff members also grow. So instead, the museum can only rely on private sponsorship which still doesn’t assist with enough help. The Museum of Vain Endeavours is left with almost no business and as well as no tight security, and yet the museum still has to classify many Vain Endeavours.

The Museum of Vain Endeavours Summary. (2016, Jun 06). Retrieved from http://studymoose.com/the-museum-of-vain-endeavours-summary-essay 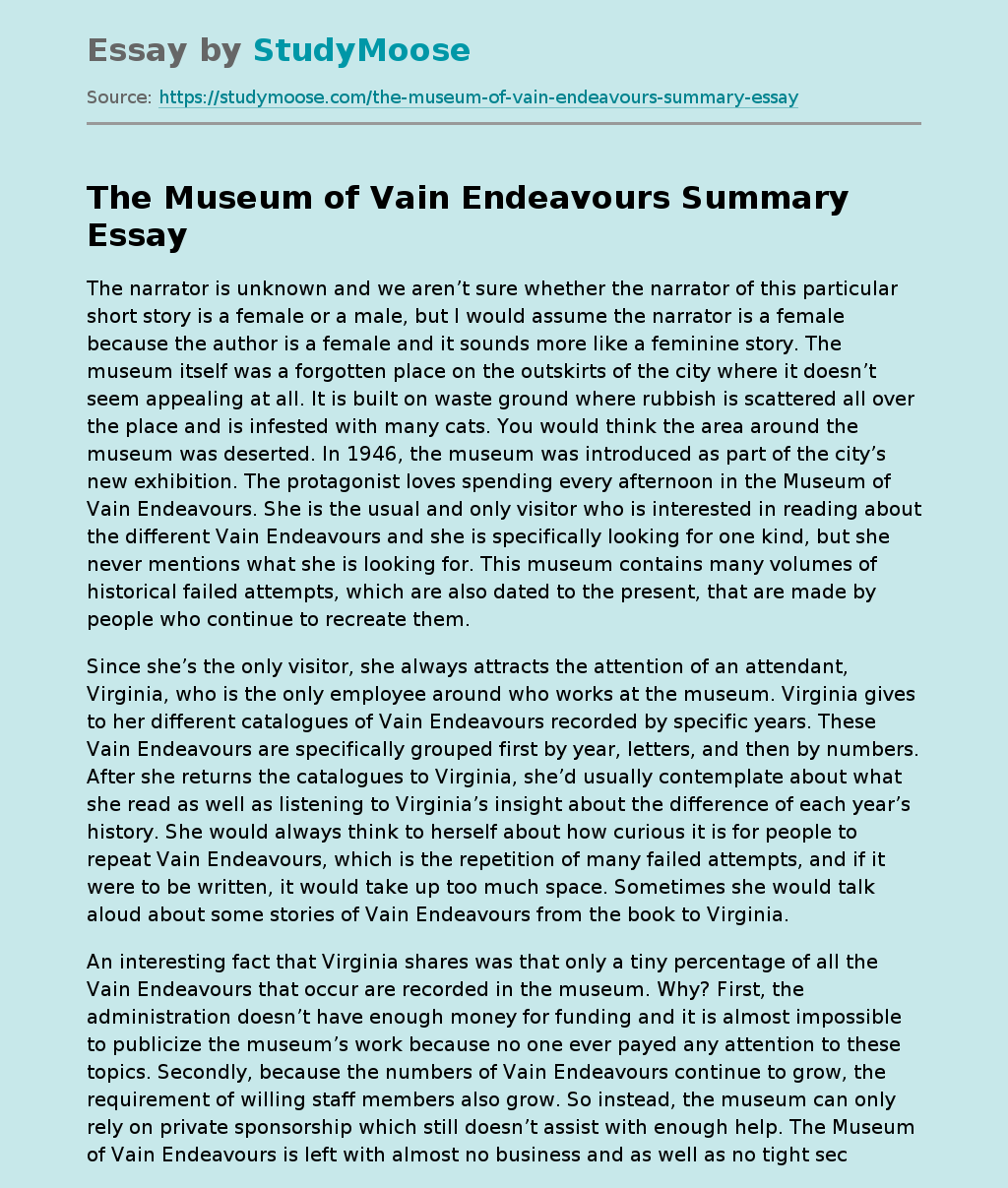