A Summary of "Opinions and Social Pressure"

In “Opinions and Social Pressure,” social psychologist Solomon Asch conducted a study to discover the influences a majority may have on individuals. Solomon Asch discovered a vast amount of people conformed under group pressure, as well as discovered others may also go against the unanimous majority. Like many of his colleagues, Solomon Asch wanted to find how group pressure effected individuals (176). Asch wanted to discover the reach on which social forces played on people’s decisions. Within the most recent eras we’ve witnessed and read about such things as propaganda having influence over whole societies.

Solomon Asch wanted to discover the role in which social conditions played on the formation of opinions in people (176). One hundred and twenty three male college students were involved in the study. Participants were shown a series of lines, a ‘standard’ line and several other lines in which they would match to the standard line.

Their answers were announced one by one in seated order.

All participants were told to answer unanimously before the trials began, except for one person out of the group. That one person was the focus of the study, seated at the end of the seating arrangement. His answers gave insights to the effective role social pressure plays on people’s decisions (178). During the trials, 36.8 percent of the participants sided with the unanimous incorrect answers given by the group. Another trial of the study showed, when given at least two people who answered incorrectly, it drastically swayed the opinion of the chosen individual, causing the individual to answer incorrectly by 13.

6 percent. Given at least three people who answered incorrectly, the percentage jumped to 31.8 percent, however, anymore than three people would cause the effects of social pressure to remain fairly consistent (180). Solomon Asch also conducted an experiment where no subjects were told of the researchers intentions; the results were a less than one percent margin on incorrect answers (180). Solomon Asch continued the study by adding ‘partners’ into the group.

The partner was there to exude confidence in the individual, which resulted in the individual answering correctly. During some trials, the partner was told to follow along with the group and give wrong answers, which caused the individual to falter in their answers (181). When asked why some of the participants went along with the group, answering incorrectly, they felt that a unanimous answer from the group should be followed by the same answer from themselves. Some test subjects didn’t want to tarnish the results, while others thought they were being fooled by tricks of optical illusions. Some individuals even thought they were the ones who were at fault, that something was wrong about them and they didn’t want the group to know about it.

While on the other hand, those who were not affected by social pressure, were initially shocked by the amounts of wrong answers given, but knew they had to trust their own judgment. Others, who acted independently, simply were non-conformists (179). The results of the study showed a surprisingly strong result for individuals to conform while under group pressure. However, the study also showed, some participants managed to remain independent, showing some people are not affected by group pressure (182). Solomon Asch conducted the study to discover the influences a majority may have on individuals, what he discovered was why there was conformity at all.

A Summary of "Opinions and Social Pressure". (2016, Jun 04). Retrieved from http://studymoose.com/a-summary-of-opinions-and-social-pressure-essay 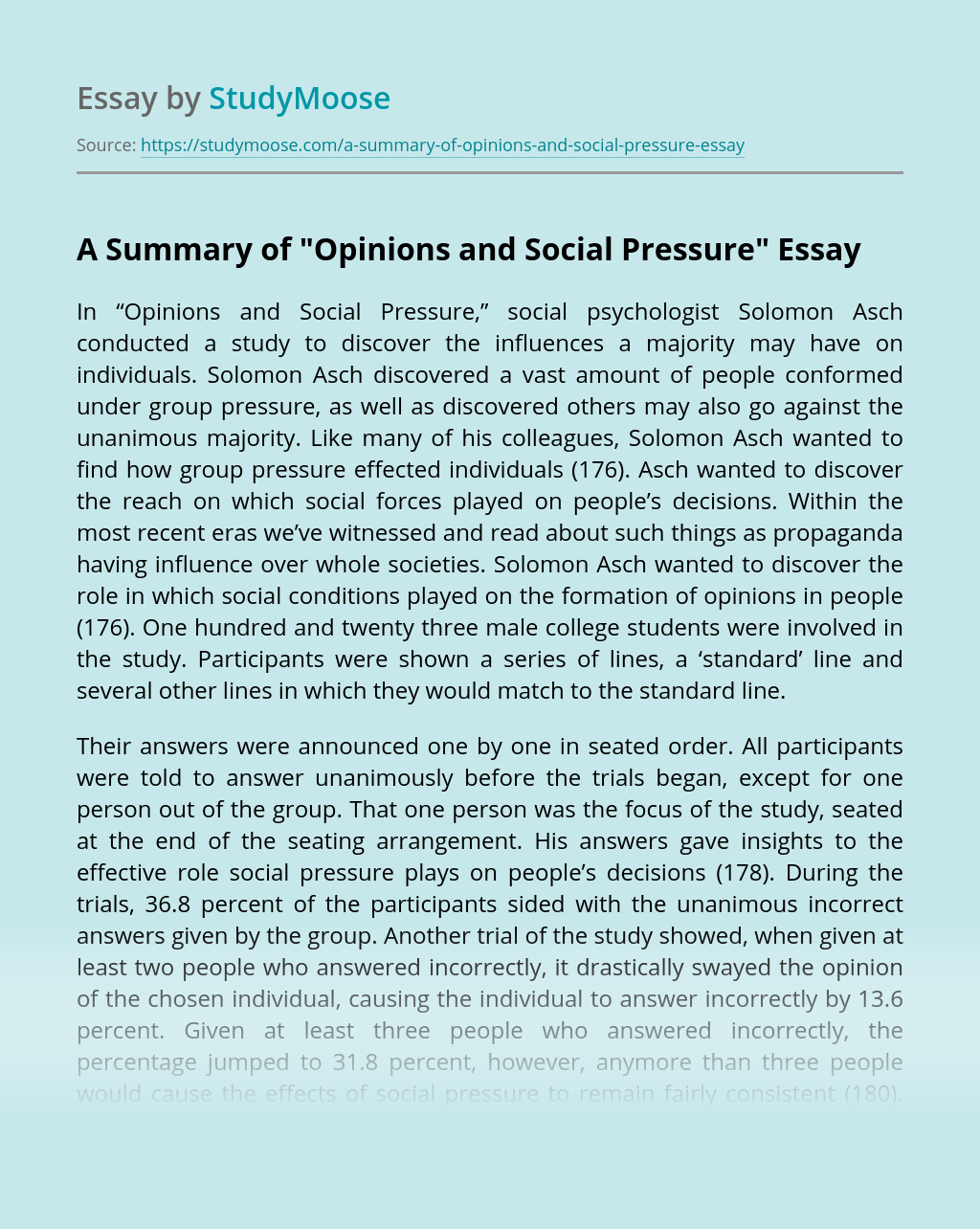 Don’t waste time
Get a verified writer to help you with A Summary of “Opinions and Social Pressure”
Hire verified writer
$35.80 for a 2-page paper
Stay Safe, Stay Original