A Society Without Culture Is As Good As Dead

This essay attempts to discuss, with examples, the topic which says, ‘a society without culture is as good as dead’. Carefully evaluated, the subject entails that culture is of great relevance and value to society. In this vein, the essay shall first examine the meaning of the term ‘culture’, and then outline the significance of culture to any given society. A conclusion shall be presented at last. In the first place, there is no universally acceptable meaning of the word culture.

Different people from different lifestyles have advocated for various theoretical interpretations. Anthropologists hold the view that culture has something to do with the patterns of behavior and thinking that people living in specific social groups learn, create, and share. Experts have categorized these as customs and beliefs, art, way of life and social organization of a particular country or group of people.

However, many experts agree that in its totality, a people’s culture encompasses their beliefs, rules of behavior, language, rituals, art and technology, styles of dress, ways of producing and cooking food, religion, political and economic systems.

According to Anchor (1990), the non-material culture includes people’s perceptions on value, beliefs, and commonly held ideals.

Both the material and non-material culture may contain some aspects of the art culture including some activities and areas of interest such as music, sculpture, painting, pottery, theatre, cooking, writing, and fashion. The economic system is a very important notion in societies made of material cultures. All societies produce and exchange material goods so that people can feed, clothe, shelter, and otherwise provide for themselves basic needs. In most material cultures, anything that can be attached to the means of production is prioritized. Thus, when carrying out studies on the material culture of a particular society, Anthropologists look at several aspects of people’s material culture including the pattern of subsistence; the ways in which people exchange goods and services; the kinds of technologies and other objects people make and use; and effects of people’s economy on the natural environment.

The aforementioned four are the major tenets of a material culture as defined in modern social groups. How advanced one material culture is determines even its levels of development. This is evidenced by itself in that the culture of any given social group defines the level of development that has been attained by that social group. Another value of the material culture is that it provides the form of exchange. Generally, it is a tradition in any society whether big or not to exchange goods and services with each other through appropriate exchange systems. In Luapula Province for example, money is not the only form of exchange, but people can use other valuable products including food stuffs, clothes, and fishing equipment to exchange with fish.

On the other hand, contemporary industrial societies have organized markets for land, labor, and money, and virtually everything is a commodity. People buy and sell goods and services using money. This form of economy, known as capitalism, is typical of the pre-modern Zambian culture. As shown above, a material culture of every society or social group has a system of exchanging goods and services. Pre-historical man developed a system of exchanging goods and services quite different from the present. Today people from different regions are able to exchange goods and services through the exchange aspects of their cultures. However, it is important to note that the culture plays a very important role in shaping the exchange system of any social group and that the nature of the exchange system determines the rate of development of that cultural group. Apart from the afore-mentioned, material culture also has a hand in the development of the use of a particular type of technology.

In most primarily agricultural societies in Zambia, people build sturdy houses of sun-dried mud bricks and grass-thatched roofs, wooden beams, or quarried stone. In large industrial and commerce-based societies, most people live in wood-frame or brick houses and apartment buildings with plumbing, supplies of electricity and natural gas, and telephone services. Much of the material culture in these societies consists of mass-produced goods created through industrial production, Sowell, (1996). A great deal of food and clothing are produced in this way. The variety of common household technologies includes televisions, stereos, microwave ovens, electric kettles and irons, computers, etc. Apart from the material culture, the non-material culture also has a great role to play in the development of a given people, social group or society.

Focusing on those aspects of the non-material culture that help people of any given society to get organized, the non-material culture varies from simple to complex societies. People commonly organize themselves according to bonds by kinship and marriage. Important factors in family, work, and political relations include age and gender. The other factor that makes the non-material culture different from material culture is the notion on ideologies. In every society, culturally unique ways of thinking about the world unite people in their behavior. Ideology can be broken down into at least three specific categories: beliefs, values, and ideals. Many people rely on religion, systems of belief in the supernatural (things beyond the natural world), to shape their values and ideals and to influence their behavior. Beliefs, values, and ideals also come from observations of the natural world, a practice anthropologists commonly refer to as secularism.

In Zambia, since the pronouncement that Zambia is a Christian nation, religion is becoming a very important aspect of the non-material culture. Religion allows people to know about and communicate with supernatural beings – such as animal spirits, gods, and spirits of the dead. Religion often serves to help people cope with the death of relatives and friends, and it figures prominently in most funeral ceremonies. In the same way, visionaries and healers known as shamans receive stories from supernatural beings and later recite them to others or act them out in dramatic rituals, Taylor (1996). Culture plays a very important role in the development of any given social group. As a way of life for a given social group, culture shapes the development of any given social aspect. One such an area is communication by symbols. According to Archer, (1996), humans are of a nature in many ways to use symbolic communication. The ability to communicate with and understand symbols is one aspect that qualifies people to have a culture. Moreover, communication is a vital component in the development of a particular country.

For example, in Zambia just like in many other countries, colours on the national flag instill a spirit of patriotism among citizens. Similarly, language allows people to develop complex thoughts and to exchange those thoughts with others. Language and other forms of symbolic communication, such as art, enable people to create, explain, and record new ideas and information. In this day and age a great deal of arithmetic is expressed or communicated through symbols, enabling a flexible way for people to communicate even very complex thoughts with each other, for instance in the construction industry. Among several benefits that come with the starting of culture is self-identity. Self-identity usually depends on culture to such a great extent that immersion in a very different culture – with which a person does not share common ways of life or beliefs – can cause a feeling of confusion and disorientation or culture shock. Sharing culture enables people to cultivate a spirit of unity.

Members of a society who share culture often also share some feelings of ethnocentrism, the notion that one’s culture is more sensible than or superior to that of other societies. Ethnocentrism contributes to the integrity of culture because it affirms people’s shared beliefs and values in the face of other, often contradictory, beliefs and values held by people of other cultural backgrounds. Cultural exchange can provide many benefits for all societies. Different societies can exchange ideas, people, manufactured goods, and natural resources. Such exchanges can also have drawbacks however. Often, the introduction of aspects of another society’s culture can disrupt the cohesive life of a people, Archer (1996). For example, the introduction of consumerism into many small societies has led to what anthropologists refer to as cargo cults. In cargo cults, people focus much of their religious energy and time on trying to magically acquire commercial goods. According to a good number of experts, education has been a vital component of human civilizations.

Today, policy makers and other concerned parties have woken up to the fact that education is crucial to the development of any nation. People are not born with culture; they have to learn it. For instance, people must learn to speak and understand a language and to abide by rules of a society. In many societies, all people must learn to produce and prepare food and to construct shelters. In other societies, people must learn a skill to earn money, which they then use to provide for themselves. Culture helps human societies survive in changing natural environments, Sowell, (1996). By enabling people to develop new technologies and learn how to subsist on new environmental conditions, people are empowered to survive. As a matter of fact, cultural adaptation has made humans one of the most successful species on the planet.

Through history, major developments in technology, medicine, and nutrition have allowed people to reproduce and survive in ever-increasing numbers. The global population has risen from eight million during the Ice Age to almost six billion, Hall (1999:45). In conclusion, I remain of the opinion that culture depicts the way of life for any given social group. It covers all aspects of the human life including symbolic aspects, art, technology, ideologies among others. However, it is common tradition for experts today to categorize culture in terms of material and non-material culture. The material culture can be much closely linked to the means of production or earning a living or livelihood that has been adopted by a given people.

The non-material culture has something to do with the beliefs, customs, norms, and other important non-material aspects of a people’s culture the society has adopted to ease the process of communication or cooperation. Culture is important for the development of any nation. It is common among anthropologists today to distinguish between developed and developing nations just by studying some aspects of the culture to that nation. Culture defines the means of production, type of technology and innovation among others. Culture is important if a given society should uphold those aspects of culture it considers to be working even for future generations. The shared aspect of culture enables people in the same society to share among other things, skills, norms, customs, and beliefs.

Furthermore, while people biologically inherit many physical traits and behavioral instincts, culture is socially inherited. A person must learn culture from other people in a society. Culture is also adaptive. People use culture to flexibly and quickly adjust to changes in the world around them. Indeed, as can be noted from the above discussion, a society without culture is as good as dead.

A Society Without Culture Is As Good As Dead. (2016, Mar 25). Retrieved from http://studymoose.com/a-society-without-culture-is-as-good-as-dead-essay 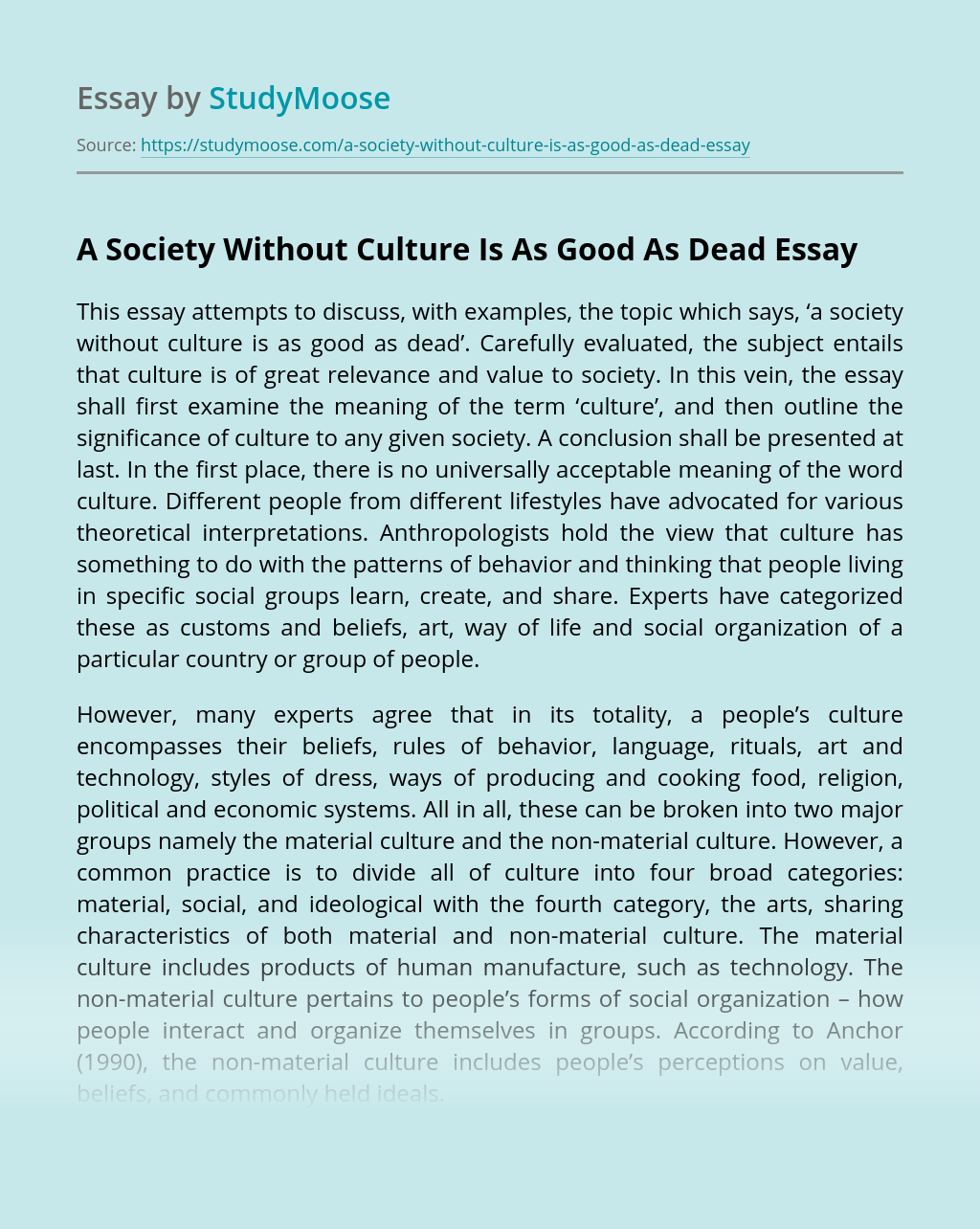 Don’t waste time
Get a verified writer to help you with A Society Without Culture Is As Good As Dead
Hire verified writer
$35.80 for a 2-page paper
Stay Safe, Stay Original