A Short Story The End of the World

Don't use plagiarized sources.
Get Your Custom Essay on A Short Story The End of the World Just from $13,9/Page

When exploring the theme of culture in this context, it is to examine the lives, beliefs, identities and behaviours that determine any particular group. The A100 book Cultural Encounters describes the term ‘cultural encounters’ as, ‘the ways in which cultures interact, overlap and are transformed by these encounters’ (Brown et al, 2008, p. 9). Upon first reading ‘The End of the World,’ the topic of cultural encounters may not be the story’s most prominent element.

The plot centres on a man who is forced to visit his dying father, who abandoned him as a child.

The narrative is written in the first person perspective from the viewpoint of the protagonist, Billy (William) Apostolesco. While not wanting to antagonise his dying father, Billy searches for signs of remorse. As his detached father ebbs away it is easy to focus on this intense relationship rather than any cultural aspects. Looking beyond the strained father/son relationship is the underlying theme of immigration, perceived discrimination and indifference to cultural encounters. This theme interlinks tightly with that of relationships and abandonment.

Billy is a Canadian whose ancestors emigrated from Europe. Most people would probably feel some interest in their ancestral home. With Billy, this is evidently not the case. He opens the story with the line ‘I never like to leave Canada because I’m always disappointed’ (Gallant, 1974 in Prescott, 2008, p. 126). He appears to have little to base this overstated opinion on. Billy talks of people, who have heard of others seeing ‘no Canadians’ signs in Florida. Billy also mentions a time he ‘had to’ go to Buffalo to help his brother who was in trouble with the law.

Of this encounter he says, ‘neither of us cared for Buffalo’ (Gallant. 1974 in Prescott, 2008, p. 126). The language used by Billy to describe his brush with cultural encounters is almost one of resigned disenchantment rather than raging hate. Billy seems to cling to his familiar Canadian way of life and reject all other cultures. Billy claims to be forced into going to France as his dying father has put him down as his next of kin. It could be argued however, that he really did not have to go and that his desire for closure may have overridden his apprehension regarding cultural encounters.

By using first person narrative the setting is described solely through the eyes of Billy. This provides us with a somewhat biased and limited perspective. It is Billy’s reasons for seeing his surroundings as he does that are of interest to the reader. Billy doesn’t actually dedicate a great deal of time to describing this environment, which is unfamiliar to him. A visitor to a new place would normally be expected to create vivid imagery. Billy’s lack of interest tells us as much about Billy’s perceptions as any description may about his general indifference towards cultural encounters.

When he does describe France it is always in negative terms. He complains about the hotel, the food and the coffee. The hospital is given the most detailed description; with crowded beds, dirty sheets and cockroaches. Billy’s negative perception could be rooted in his forefather’s reason for leaving Europe in the first place. Billy sees this undesirable cultural encounter as some kind of divine retribution for his father, ‘This is what a person gets for leaving home’ (Gallant, 1974 in Prescott, 2008, p. 126). Home in this instance is Canada and the family home.

Billy’s father is the only other major character in the story and the antagonist. He deserted his family to join the ‘Queens’s Own Rifles’ which as Billy states, ‘wasn’t a Montreal regiment’ (Gallant, 1974 in Prescott, 2008, p. 125). His father, who clearly has no fear of cultural encounters, then goes on to work in cruise ships. Billy’s father voices his longest dialogue as he recalls a story from their past. He recollects how he and his own father took Billy’s sister Lou to choose a toy village. Lou apparently took ages to find one devoid of imperfections.

Billy’s father says of this, ‘She was smart at the time not to want something that wasn’t perfect’ (Gallant, 1974 in Prescott, 2008, p. 129). His reflections on the past are almost to himself. It almost feels as though he is lamenting his own search for a perfect life and possibly that of his ancestors. His father’s inability to settle anywhere could be perceived as stemming from an expatriate heritage, resulting in a confused cultural milieu. The story is structured around the twenty three days that Billy spends in France with his dying father.

Billy is telling the story as a past event rather than in the present. This allows him to focus on relevant aspects rather than give us a day by day account. The rhythm of the story is slow and at times almost seems to stop completely, as Billy and his Father are locked in Limbo between life and death. Billy not only waits for his father to die but for an epiphany that can only come from his father’s remorse. In the central body of the story, time is interlinked with Billy’s thoughts of his father as well as his father’s dialogues.

The theme of desertion in the past and the present is represented throughout. Billy sees the irony of his father’s desertion of both his family and Canada. ‘Our ancestors had been glad to get out of Europe. It took my father to go back’ (Gallant, 1974 in Prescott, 2008, p126). The story concludes without a dramatic denouement, but with William’s sad realization that in dying his father has once again deserted him. When analysing the dialect and language used by the characters we aren’t immediately presented with distinct cultural linguistics.

The family name, Apostotolesco, is the first and most obvious reference to European encounters. The name is repeated throughout the story, more than is maybe necessary. This serves as constant reminder of Billy’s European links. The use of words such as ‘drugstore’ and ‘cab’ relate to the Americanised use of the English language. In the hospital Billy is disconcerted by his father’s carefully pronounced speech which he describes as not being ‘snobbish or an English accent’ (p. 129).

This probably has more to do with him struggling to speak than anything. Billy dreams in a foreign language ‘so foreign I don’t even think it was French’ (Gallant, 1974 in Prescott, 2008, p. 129). It’s as though French were some alien speech rather than part of his cultural heritage. In the chapter on short stories in the A100 book Cultural Encounters, Lynda Prescott raises the issue of ‘how far we should be looking for an expression of the writers’ personal experiences in the fiction they write’(2008, p. 135).

Gallant was born in the French speaking Province, Quebec in Canada to a mother raised in the USA and a father of English/Scottish parentage. Her father died when she was young and she spent most of her childhood in various boarding schools. So Gallant certainly has the experience of both desertion and cultural encounters. In 1950 Gallant moved to Paris and has resided there ever since. In an interview with The Paris Review the interviewer asks if she considers herself a ‘Parisian? An expatriate? ’ Gallant replies ‘A Canadian of course’ (2009).

In ‘The End of the World,’ Gallant illustrates cultural encounters through a brief moment in time. By the careful use of use of structure, narrative techniques and language we are able to glimpse into the cultural experience of multiple generational immigrants. Billy holds on tight to his Canadian life and is dismissive of all other cultures, despite his European cultural heritage. His father’s character represents an individual who has found it hard to settle in any particular way of life. This may stem from cultural displacement and a search for identity.

A Short Story The End of the World. (2016, Oct 03). Retrieved from https://studymoose.com/a-short-story-the-end-of-the-world-essay 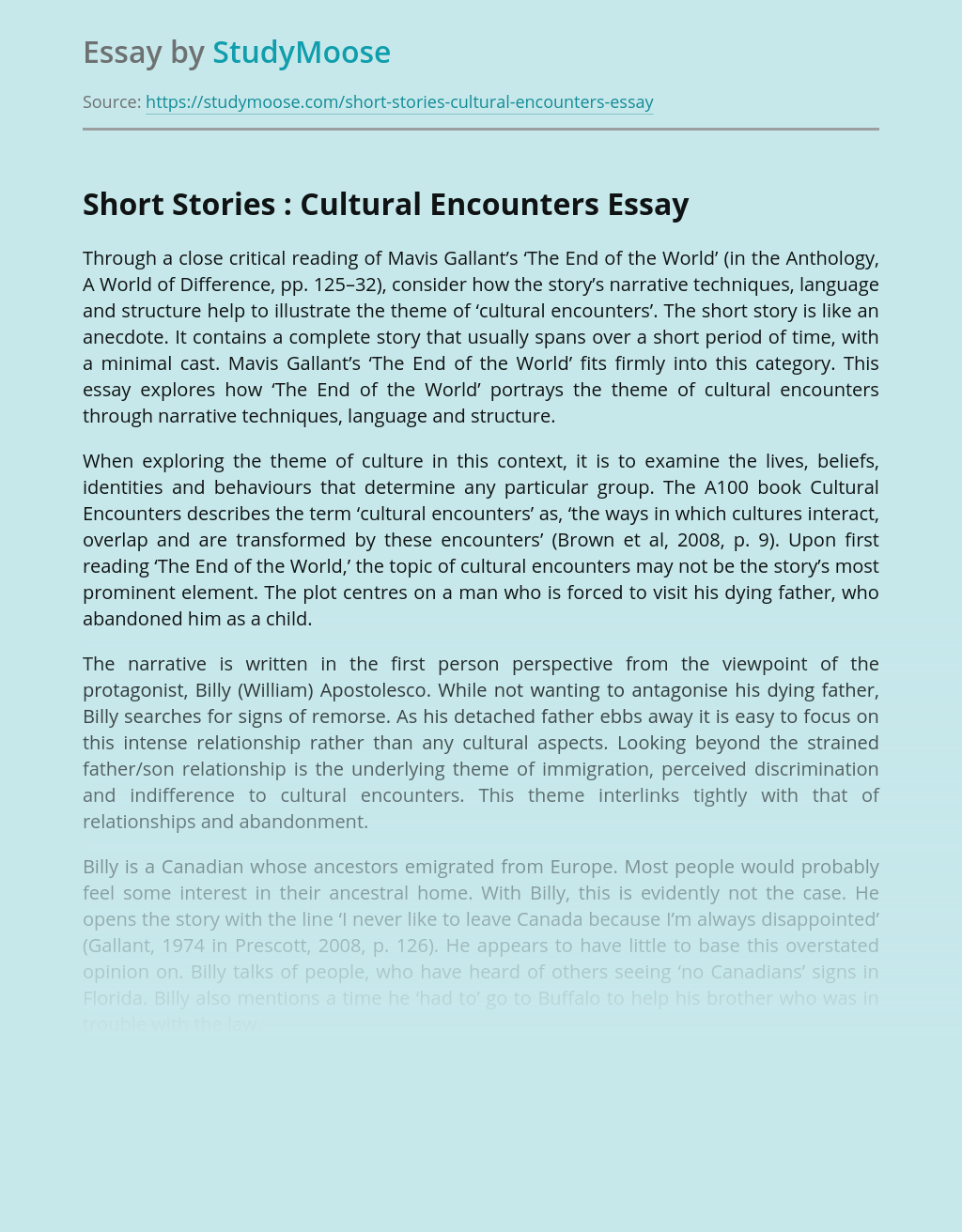 Hamlet focusing on the enigma of the character Hamlet It is said that it is every actor’s dream to play Hamlet, and Hamlet quotes have become household words which crop up in the most diverse contexts. Both critics and psychiatrists have felt tempted to probe into the depths of this enigmatic Shakespeare character. For Hamlet...

Get Essay
Paper on Suicide/Suicide Prevention

The topic that I have chosen for this paper is Suicide Prevention in your Area. Suicide is a serious problem that has effected the entire country. Recent studies have shown that suicide is the eleventh leading cause of death in the United States. Don't use plagiarized sources. Get Your Custom Essay on A Short Story...

In this paper, the authors examine how the death penalty argument has changed in the last 25 years in the United States. They examine six specific issues: deterrence, incapacitation, caprice and bias, cost innocence and retribution; and how public opinion has change regarding these issues. They argue that social science research is changing the way...

Elaine McArdle said, “The music industry is struggling with a full blown crisis”. What could possibly be pushing the music industry into a crisis one might ask, illegally downloading free music. In the essay, Up on Downloading, three Harvard Law School professors are trying to come up with different solutions to this problem that is...