In the book, A Shopkeeper’s Millennium, by Paul. E. Johnson, a closer look is taken at the society of Rochester and how it was affected by the revivals from 1815 to 1837. He does this by looking at the Rochester Directory, church records, and other documents from the city of Rochester. Yet, more importantly the author tries to explain why the revivals even took place. Johnson’s theories that present themselves in the book contract Tocqueville’s and other beliefs that revivals were society’s anecdote to individualism.

Don't use plagiarized sources.
Get Your Custom Essay on “A Shopkeeper’s Millennium” by Paul. E. Johnson Just from $13,9/Page

To put it more simply: Johnson feels that revivals had little to do with family breakdown, isolation, and rootlessness. More accurately he feels it had to do with a number of things.

Before 1815, Johnson describes the town of Rochester as a place where “town and country were separate worlds”(16). However, with the arrival of the Erie Canal, improvements in inland transportation turned farmers into businessmen, which consequently caused a number of changes to take place.

The first of these changes was the restructuring of the employer’s household and his interaction with his employees. As a more capitalistic society emerged with the ever growing commerce of Rochester, the master craftsman became more capitalistic himself. Now, the master was concerned with making his products quickly and cheaply. With these more materialistic desires came a decreased concern for the well-being of his employees. Also due to the master’s new concern for privacy and shelter from a sin-filled world, employees no longer shared the home of his employer.

Without the supervision of a master, workingmen moved into neighborhoods of their own. Johnson provides information that shows with the workingmen all living together, heavy drinking occurred within these neighborhoods. Quickly a negative stigma was becoming attached to anyone who touched the bottle. This is partly due to the fact that the bourgeoisie was quickly becoming aware that “the consumption of alcohol is the center of all problems”(46). Consequently, people who also served alcohol were being just as frequently looked down upon. Problems began to arise between the masters and the wage-earner which used to exist between the different religious and cultural factions of the elite.

These new problems can be boiled down to the master’s unhappiness with the unruliness of the working class and his inability to control this predicament. To quote Johnson, “the sober and moral part of the community no longer controlled what happened” (77). The middle class tried to rid Rochester of sin, yet as the electorate increased, the lower classes began to vote and thus hold office. Persuasion rather than force was the only possibility left for elite.

With the arrival of Charles Finney in the town of Rochester came a number of changes mainly concerning the social disruptions between the middle class and workingmen. The new form of evangelical salvation opened up to the ranks of the middle-class. This new approach differed from the Calvinist theory of predestination and said that “the only thing preventing individual conversion was the individual himself”(96). This approach to religion applied to the middle class in that the burden of what the lower class did was lifted off of their shoulders. The reasons the revivals were so popular among the working class stems from the middle class’s enormous desire and pressure to reach the Millennium. Also, if one wanted to prosper in Rochester, than his career was dependent on whether or not he was converted. Now society was split instead between people who loved Jesus and those who did not.

Essentially revivals created a solution to social disorder and moral confusion in a labor-free economy. Because Rochester became a manufacturing community so fast, disorder was bound to happen. But Johnson points out that these men demonstrated “free labor could generate a well regulated, orderly, just, and a happy society.” 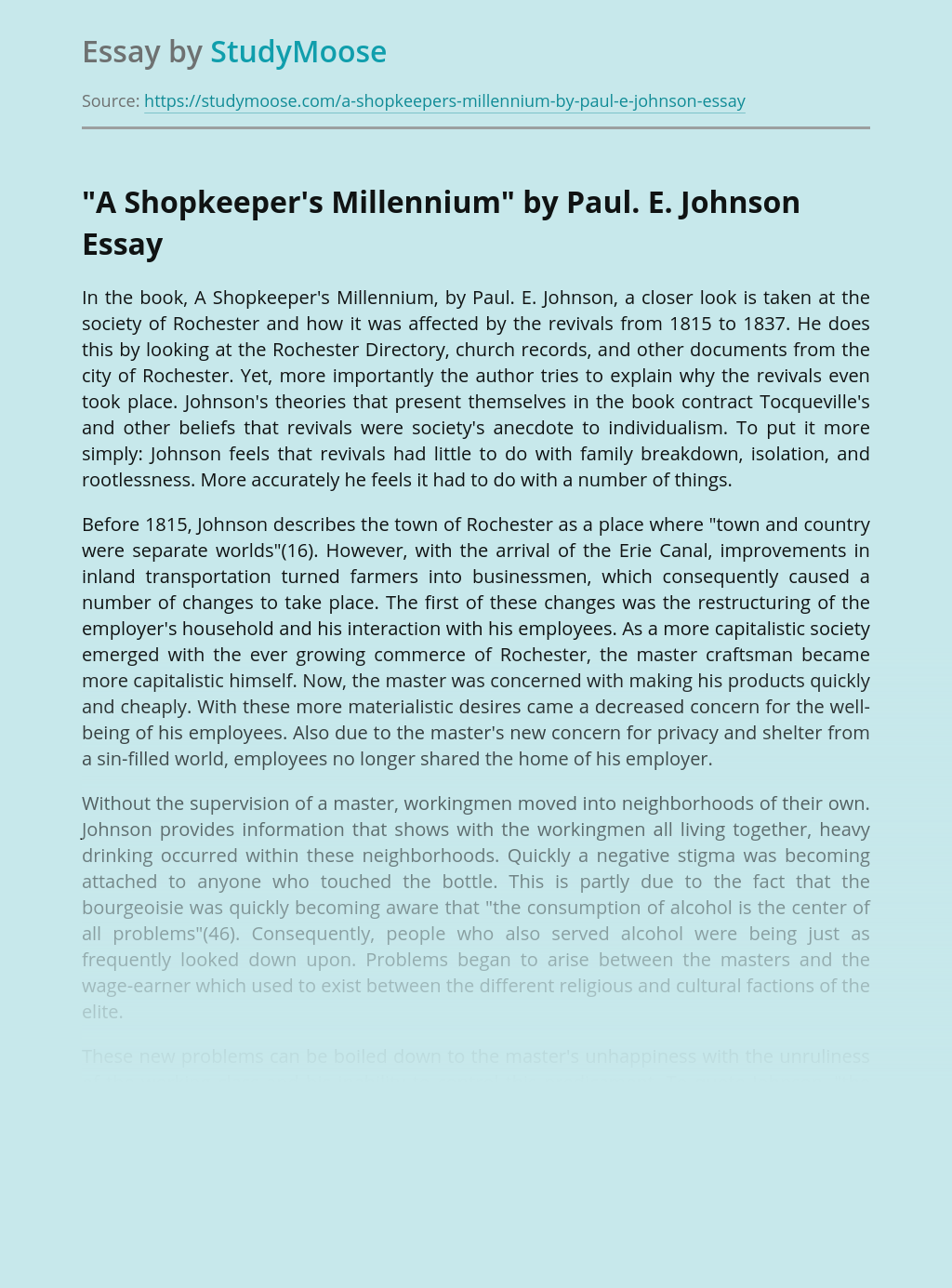 Scarborough Shoal- Who has the Right

Rate this post The Scarborough Shoal and its surrounding area are rich in fishing grounds. In 1998 to 2001 a significant number of Chinese fishermen have been arrested for illegal methods of fishing and catching endangered protected species. In latest news, another Chinese fisherman has caught by the Philippine National Navy because of the catching...

Rate this post In the book, A Shopkeeper’s Millennium, by Paul. E. Johnson, a closer look is taken at the society of Rochester and how it was affected by the revivals from 1815 to 1837. He does this by looking at the Rochester Directory, church records, and other documents from the city of Rochester. Yet,...

Get Essay
Objective summary for Mk

Rate this post The Story MK is about a girl named Jean Fritz who lives in Wuhan, China and then moves to America because of the fighting on the Yangtze River. An MK is a missionary kid who goes to another place to spread the culture of that place. Jean is a young girl who...

Rate this post “Sister Flowers,” is a descriptive narrative by Maya Angelou. This piece was taken from her first of six autobiographies, Why the Caged Bird Sings (1970). Angelou, with much admiration and respect, describes a woman by the name of Sister Flowers as, “the aristocrat of Black Stamps”(87), “the measure of what a human...