The Effects of Social Class to Family

In the article “The Color of Family Ties: Races, Class, Gender, and Extend Family involvement” by Naomi Gerstel and Natalia Sarkisian, there is a theory that they believe in reality, people misunderstand the wrong concept of family involvement. In this case, we need to realize this conflict is still happening in the societies. Base on the authors’ data, Black and Latinos/Latinas families show that they likely to have less education than the whites families therefore black and Latinos/Latinas will focus on reply the helps from the members of the families rather than being independent (49).

Toward more, Gerstel and Sarkisian also discuss that in their researches; women’s work class and their social roles are huge issues in the family and the society, which they examine (50). After Gerstel and Sarkisian talks about the relationship between education and women’s role towards the social class, they additionally argue that the economic conditions are the roots of the families (54). Therefore, the ideal of families’ connections is about the roles that social class has.

Social class will play bigger roles in than ethnicity while difference group has developed ways to deal with the emotional and financial changes.

The article is about the facts that people, doesn’t matter the genders, they often have the wrong understanding of the connection within American families. Gerstel and Sakisian explains clearly that because social class is more significant than the race, gender, the education or even the class as the results in determining a family’s characteristics, social class reflects the kind of lifestyle a family is living.

Social class is also a representation of a family’s financial capability. Race or ethnicity can represent cultures but not as the standards of living. The first data explains about the education and how it affects on the social roles. When talking about the marriage lives of blacks and Latinos/Latinas, we often hear that they are the people that seem to have more disorganization than whites families, as results Blacks and Latinos/Latinas families’ connection are weaker than whites (49).

Gerstel and Sarkisian believe that the perspectives on family relationships contradict that blacks and Latinos are the lacks of educations. For example, Blacks and Latinos are to be less independent than the Whites because Blacks and Latinos want and give members of the family the supports, and helps rather than doing on their own. This shows that Whites are more independent than Black and Latinos because Whites or White men have more chances in making larger amount of income, and so that Whites receive more education than Blacks and Latinos (48). This proves to the fact that education is related to social class because it shows the situation that people learn the knowledge of social class is when they have the chances to go to school to learn about people’s opinions, as we can see in above data that provide by Gerstel and Sarkisian. It analyzes the authors’ arguments by stating the effects to convince that because of lacking education that blacks and Latinos receive, is the result that social class has a bigger role (50). After reading the comparison of the education between blacks, Latinos and whites, Gerstel and Sarkisian come up with the issues of women’s role especially in poor class where their marriage will involve with the social class. The research says married women will take the time to care about the parents more than the unmarried women (52).

Along the research, Gerstel and Sarkisian believe that married women tend to create the support from or to the relatives because of the social organization that mother corporate with the family involvement. It explains the reason that make marriage women establish the mutual supports from others because of the facts that they involve more with the parents and siblings than the unmarried women (52). This sets up as the example of women’s role in culture, likewise the relationship between the social class and the cultural values. It displays on the different images that people know about social class. It makes the readers focus on distant sizes of women. This shows the ideal that women’s marriage within the family involvement, social class has the bigger role by compose the element of people while culture consists of knowledge, ideas, customs, and traditions. In the contrast that Gerstel and Sarkisian make between the understanding of changing behaviors and improvement, they finds out that most people contribute their ways of thinking to make their lives situation better by focusing on their behaviors.

The authors want the readers to know that the specific links between the race and class is significant. It makes people be able to understand the different concept of cultural values and the social class. Gerstel and Sarkisian specify that the role in social policies should be about the way that people make the adjustment for the family, it is not about trying to figure out how to change one’s behavior (54). This is what Gerstel and Sarkisian wish the readers know that it is very important in the family if they can understand the strategies in family life matter. It should not about changing individual’s behavior; instead the family should accept the challenges that they deal with; to improve their situation in economic status. Gerstel and Sakisian also say that the head of the family should recognize the fact that the support that they get from the relatives cannot make their lives in poor condition become better (54). What he or she should do, is to setting up the family in new concept, a concept that challenge them to face new things, to experience different things. Instead of sitting and blaming on who is the reason why the family become in this poor conditions, the family should focus on the things that can be arrange to improve the status of the budget. This is significant because this shows that working and dealing with the budget of every day of person’s life is the reflection social class because it shows how a family knows to communicate correct. For this reason, the authors need the readers to understand what extend family should provide.

Even though there are resources that shown about the ethnic inequalities, but there are facts to prove that improvements in economics opportunities and resources is the need in enter of the family. Overall, my reaction to Gerstel/Sarkisian’s thesis statement is confusing at first but then it start to make sense when I can understand their main points of the article. At first I feel complicate when Gerstel and Sarkisian talk about the lack of education matters to the standard in American families because I thought they talk about social class is reason in family connections. However, as I go through the texts over again, I can see how the authors are trying to say. They want the readers as well I am, to understand that the aspect of education is matter, but social class has higher impact on the family involvement. It leads us to the point that we finally understand why Whites are more independent than others, just not only because of the races but it is because of the social class that they belong it. Moreover, when Gerstel and Sarkisian talk about the social class of the women when they married. At this point, their arguments start to open my mind, and be able to understand the relationship between cultural and social more.

It accurate when they argue that cultural and social can share the commonness, but social is bigger than cultural because social is the element that person has before they learn about the cultural values. Finally, the third main point, it is about the economic status. In the article, Gerstel and Sarkisian said, “Instead, we argue, it is important to understand that family strategies and behaviors often emerge in response to the challenge of living in economic deprivation or constant economic insecurity” (54). In this point, Gerstel and Sarkisian justify that when there is an issue about the economics opportunities in the family, people are mostly thinking about changing their behaviors, but in fact they should consider how to arrange ways to make their economics conditions improve. I can see this is the connection to the reality because in average, family will blame on others’ behavior about the conflicts and then come up with the ways that can change the behavior, but never notice that it will not getting any better. Beside, they should acknowledge the existing family arrangement.

This is a huge commitment for my reaction because it shows clearly how social class is more important than ethnicity. Each main point breaks down very thoughtful and proves the way that people have opinions on family involvement is almost correct, but they forget about social class. As I link back to the beginning of the article where Gerstel and Sarkisian talks about the family obligations. When at first I read about the connections that the authors make between educations and social class, they are typically focus on disorganizations roles between the races. “For example, 76 percent of Blacks, 71 percent of Latinos/as, but just 63 percent of Whites see their relatives once a week or more (49)”. This shows that Whites are being more independent than Blacks and Latinos by showing the statics that consider visiting the relatives more. At first this does not make good connection between the relation of education and social class. But going at the bottom of the page, it says, “When it comes to help with practical tasks, however, we find that Blacks and Latinos relatives are more likely than White to be supportive” (49).

Also, “In fact, Black and Latino men are more likely than White men to live near relatives and to stay in touch with them (50). It is significant because this show the facts that Whites has more advantage than the other race by telling how independent Whites are, despite when I compare with the facts that Blacks and Latinos have more percentage than Whites, about the visiting the relatives. By looking at this connection that the authors make, I can see how Whites men will have chances in giving and receiving more income than Blacks and Latinos because Whites has more advantage in both, education and social class. After reading the whole article, Gerstel and Sarkisian wish those there readers to know different connections in the family. They want the readers to realize that social class is the most important concept in the family. Social class has bigger roles than the education, than the cultural that apply to people, and also to the economic conditions. In real life, people will learn by going to school, but in the authors’ point of view is different because as human beings, we expect to learn more in reality as experiences in social class. Then it comes to the point when we apply our culture to the communities, when we come up with different opinions on things, and this shows that each person has understanding because we have different social class.

The Effects of Social Class to Family. (2016, Feb 26). Retrieved from http://studymoose.com/the-effects-of-social-class-to-family-essay 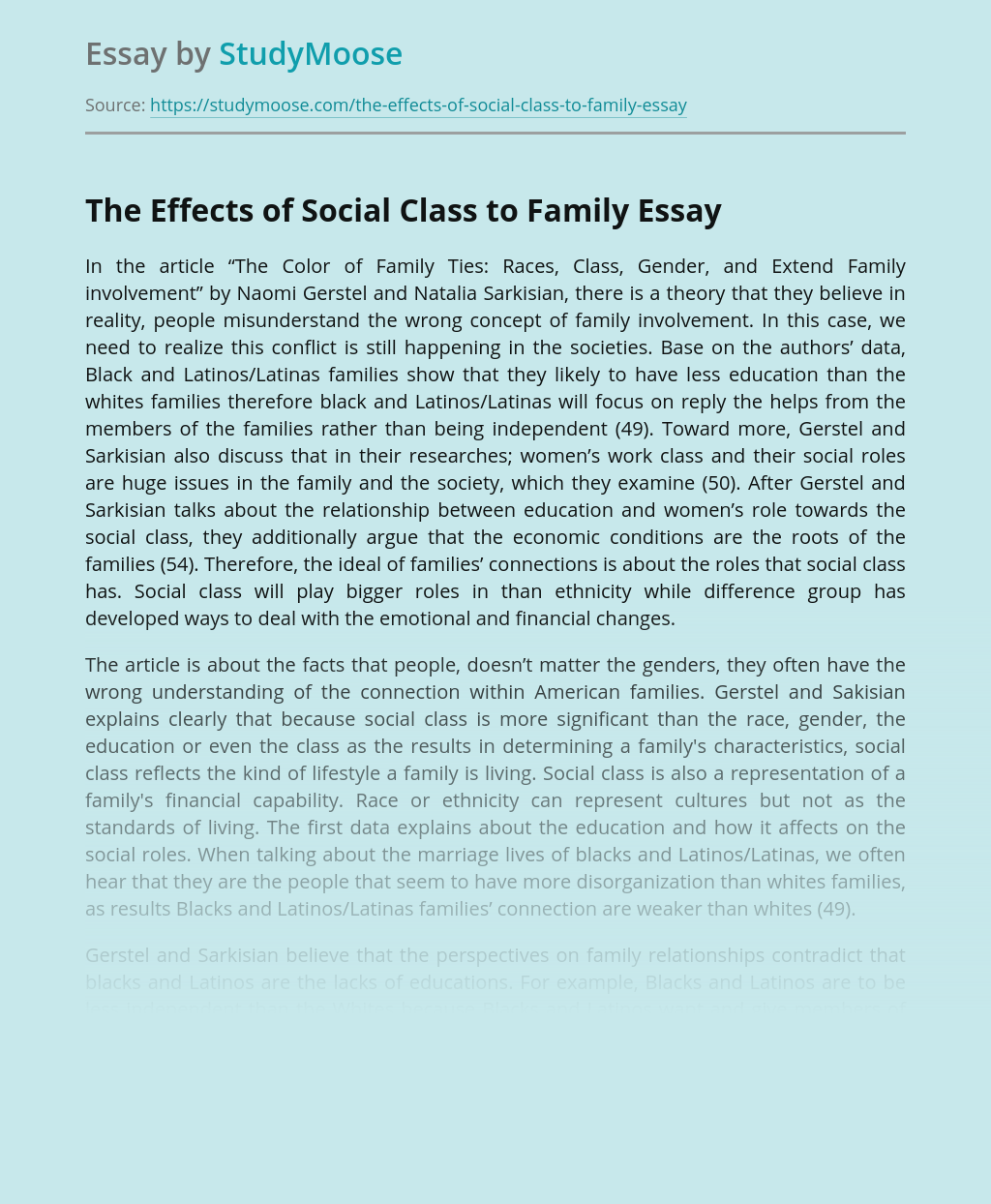 Don’t waste time
Get a verified writer to help you with The Effects of Social Class to Family
Hire verified writer
$35.80 for a 2-page paper
Stay Safe, Stay Original