A Rhetorical Analysis: Waiting for Superman

A Rhetorical Analysis: Waiting for Superman The system that was created to educate and teach our students is actually holding them down. The American educational system is in a state of disarray and is in desperate need to be fixed. This is a prominent message in the movie/ documentary “Waiting for Superman”, directed by Davis Guggenheim. Since there is few other movies about the education system, Davis had the difficult task of arguing his point of view to the audience.

Don't use plagiarized sources. Get your custom essay on
“ A Rhetorical Analysis: Waiting for Superman ”
Get custom paper
NEW! smart matching with writer

He uses numerous different ways to convey his message to the audience. The most notable of these are: children, animated explanations, emotional and logical appeals, and a few of the important education reformers that are trying to fix the failing American school system. These strategies were used to convince the audience that the school system is failing, and it did very well.

The only thing that is not discussed enough in the documentary is the opinions of those that do not think the educational system is in need of repair.

Even without clearly stating the opposing viewpoints, Guggenheim did an excellent job of arguing his message. The director wants to inspire and encourage the whole nation to take action on a very important topic that this being suppressed by other economical, political, and cultural problems that are facing the United States today. Guggenheim also places strong blame on the unwillingness of the school system to change, with focus on teacher tenure, curriculum, and money. If only one argument had to be chosen as his ‘most persuasive’ it would have to be teachers, and schools inability to remove them if they are underperforming at their job.

He also shares many facts and statistics that could ignite action on their own, but he incorporates them in such a way that exaggerates it with use of music, animation, and thoughtful narration. Money and income is brought up many times throughout the movie.

The main point he wanted to get across relating to income is that kids that live in low income homes can learn just as much, if not more, than people in higher income households; and it is the schools that are failing them. In the documentary, we learn that the KIPP program brought low income students percentile “from the 32nd to 60th percentile in reading, and from the 40th to the 82nd percentile in math”(1:18:07). This statistic proves that reforming the education system can work; the director wanted the audience to know this fact, and did a great job delivering it. The recurring critique that will appear in the analysis is opposing views. All the families and children he used for the documentary lived with low income families. No kids were shown from more wealthy families. In this case it is not really needed because the focus is on the misconceptions of low income students. A topic that is discussed only a couple times in the movie is curriculum and pathways. The first mention of it was when they were talking about how not only the federal government was sending money and material to schools but also the states were sending their own. (30:15) The narrator says that this occurrence often sends conflicting standards. An example that is stated in the documentary is “the same student who fails a proficiency test in Longmeadow, Massachusetts can drive a mile south and pass a similar test in Enfield Connecticut”(30:28).

These conflicting standards could have made Guggenheim’s argument even more convincing. This is the only mention of ‘school standards’ in the movie. One part of the documentary that is similar to curriculum is at the (1:04:12) mark. In summary the narrator says, kids academic future will be decided by a school official. Those officials will place them on a track often determined by test results, but also determined by other subjective factors. The students that are placed on lower tracks often are falling behind those on higher tracks. The students on lower tracks also often have the worst teachers (1:04:12-1:04:43). This cartoon does a great job delivering the director’s point, that the school system is failing our children. By far, the most used scenario in Davis’s movie is bad teachers. Multiple times throughout the documentary tenure is brought up. Tenure bassically will not let schools fire bad teachers. Since schools cannot fire teachers, they have to do what they can to try to improve their school. This is described in the movie by the ‘lemon dance’.

“Principles have their lemons, these are teachers that are chronically bad, they know it, other teachers know it and the school knows it. But the union contract says you can’t fire them. So at the end of the year all the principles get together and they do the lemon dance… each principle hope that somehow the lemons he gets are better than the ones he is getting rid of”(43:32-44:24) This is a long quote but it is an important one. The dance of the lemons is an effective way to show the audience how bad teacher unions/ tenure is crippling the education system. Once again the use of cartoons and thoughtful narration effectively drove an idea into the audiences brains. Logos and pathos, or logical and emotional appeals, were used in a surreal way throughout the film. The use of these appeal can make the audience want to act, consider, or feel emotion. In the documentary, the narrator says, “ For generations experts tend to blame failing schools on failing neighborhoods, but reformers have began to see the opposite, that the problems of failing neighborhoods might be blamed on failing schools” (24:06). This sentence makes the watcher consider the fact that failing neighborhoods are probably due to failing schools. How do you get someone to remember what you want them to? You use pathos in rhetoric.

Personally, what made this movie so memorable is the drawings of the kids names starting at the (1:30:00) mark. This is an excellent way to get the audience to remember the movie because it makes them feel an emotional connection to the kids. Hearing those names be called out, knowing if they don’t get into the good school they will be back in the bad school they came from, persuades the audience to help change the failing school system. The American school system is holding its own students back. This message is what Davis Guggenheim, the director of “Waiting for Superman”, wanted the audience to know. He used an array of tactics to argue his point of view, some of these were cartoons, children, and logical/ emotional appeals. These strategies were the perfect building blocks for a memorable and well organized argument. The main criticism for the documentary is that the opposing views are not talked about enough. The movie overall did an excellent job of arguing its point.

A Rhetorical Analysis: Waiting for Superman. (2021, Aug 05). Retrieved from http://studymoose.com/a-rhetorical-analysis-waiting-for-superman-essay 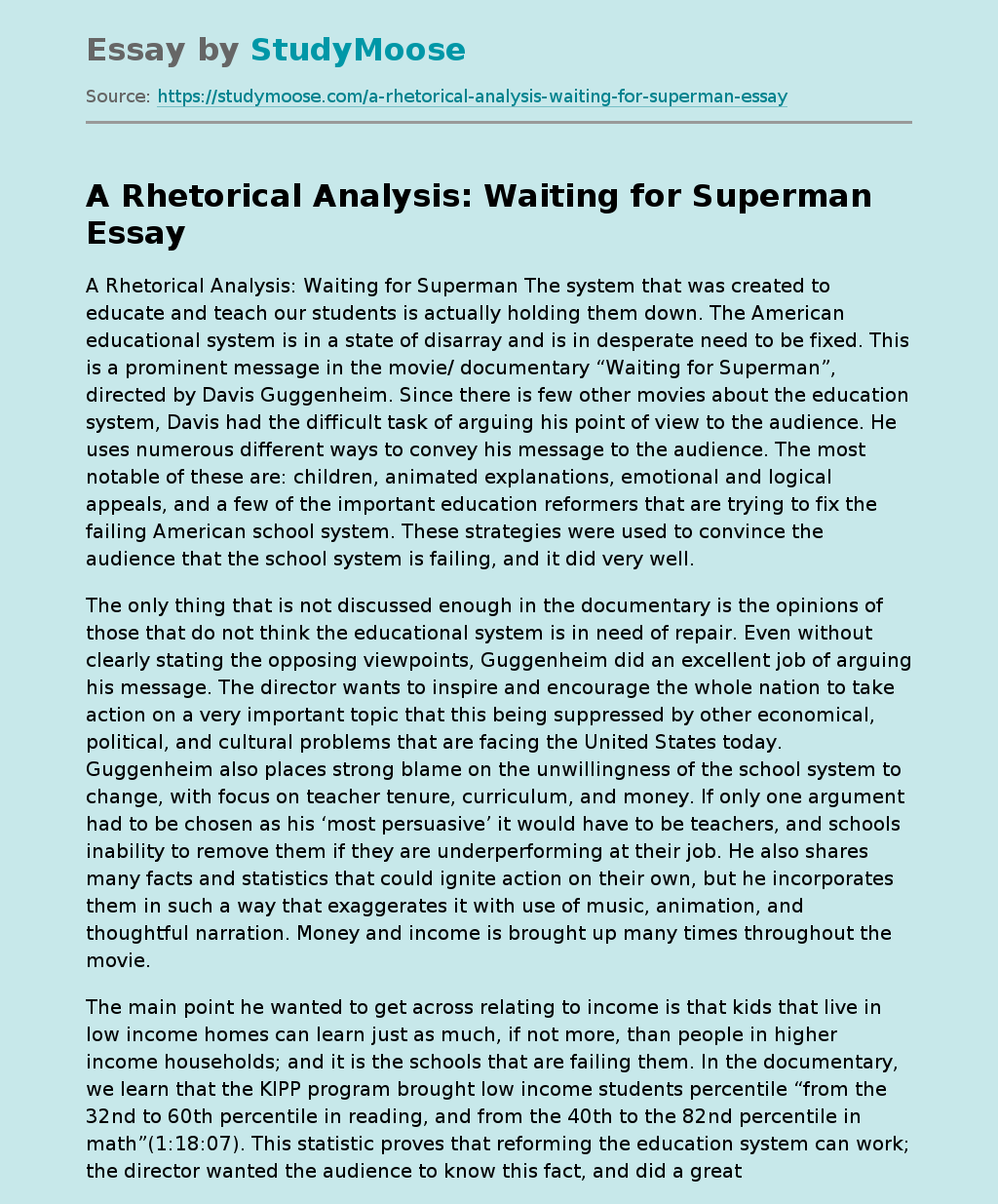