A Review on Creon's Downfall

It is clear that Creon’s tragic flaw was his pride, arrogance and beliefs of a leader that cause his downfall. His downfall began when he denied the burial of Polyneices and was firm when he condemned Antigone for her objection to his law. Creon represents the laws of the land and the divine ruler of society. He remains loyal in upholding his laws and trying to overpower the laws of the gods, until the end when he realizes that the divine laws are stronger than his own.

His regards for the laws of the city cause him to abandon all other beliefs. He feels that all should obey the rules set forth by him, even if other beliefs, moral or religious, state otherwise. This is proven when he says, “As long as I am King, no traitor is going to be honored with the loyal man. But whoever shows by word and deed that he is on the side of the State-he shall have my respect while he is living and my reverence when he is dead” (pp.

This proves that no one should disobey his rules even if the people that he rules for thinks his morals are wrong. But no one wants to speak out or stand up to Creon because they all fear him and afraid to loose their life going against his words. Creon showed his stubbornness by not wanting to be proved wrong because of pride. He did not want to listen to the people of Thebes who tried to tell him that Antigone did the right thing, but for fear of him, they could not really say anything.

Creon thought by making an example of Antigone’s execution, everybody would get scared and won’t try to break his laws. He abused his power by thinking that he can change or break the laws of the god’s and not allowing other people to break his laws. He did not want to burry Polyneices’ body, but one of the god’s law was that every human deserves to be buried after death not depending on what that certain person did in his lifetime. Creon caused fear among his people by making a public announcement that nobody is allowed to burry Polyneices.

He said that the state of Thebes consists of only him, and that there are no other laws than his. The major actions that Creon took to cause the downfall of Thebes are that he did not want to burry Polyneices nor did allow any body to do it. He broke the burial law of the god’s and punished Antigone for following their laws. The people of Thebes knew that Creon made a mistake but still were too afraid to speak up. Antigone thought that she should get honored for that what she did, but Creon did not think that way.

The downfall of Thebes was caused by Creon’s stubbornness and abuse of power. He thought by being King he can do whatever he pleases and have everything going his way. Creon’s role as a King made him believe that he has the right to brake the laws of god’s and makeup his own. He caused the corruption of Thebes by trying to measure his powers with the powers of the god’s which Teiresias foreshadowed that it won’t have a good ending. References Antigone: Creon’s Flaws. Dec 2004.

A Review on Creon's Downfall. (2016, Aug 28). Retrieved from http://studymoose.com/a-review-on-creons-downfall-essay 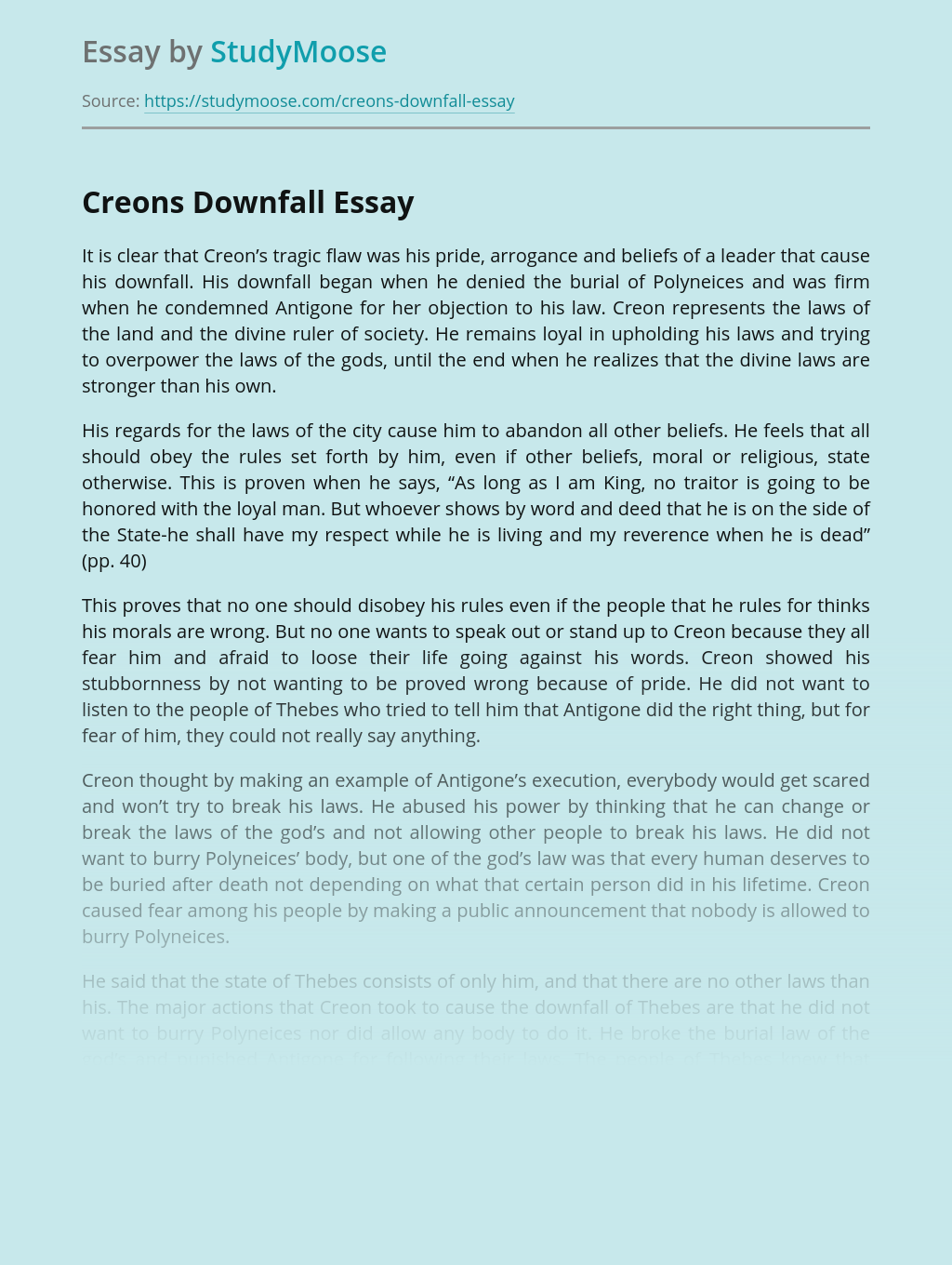 Don’t waste time
Get a verified expert to help you with A Review on Creon’s Downfall
Hire verified expert
$35.80 for a 2-page paper
Stay Safe, Stay Original