A Poem To a Skylark by Shelly

Skylark is a typically romantic poem due to the use of language and feelings expressed in the poem. The title ‘To a Skylark’ is typically romantic as the poem is wrote directly to a bird. The references to time, height, heaven and the poet himself are also typically romantic. The poem describes how the bird is not just a bird it is much more than that. ‘Hail to thee, blithe spirit! Bird thou never wert’ (L1-2) this is as though the poem is telling the reader that it is not just describing a bird but many different parallels are being shown through the image of the bird.

Don't use plagiarized sources. Get your custom essay on
“ A Poem To a Skylark by Shelly ”
Get custom paper
NEW! smart matching with writer

‘spirit’ may also be taken literally as somebody which has been lost to the poet or merely just as a metaphor of the bird. The poem in itself is contrasted with the birds singing to emphasise the beauty and perfection of the poem ‘Pourest thy full heart, In profuse strains of unpremeditated art’ (L4-5).

The poet is full of poetry which pours from his heart without the need of concentration and thought as easily as the bird can sing its song. The emotions contained in the poem are soaring higher and higher as the bird gains height above him ‘Higher still and higher, From the earth thou springest’ (L6-7). As the bird glistens in the light, yet more inspiration is shown in the poem. ‘Like a cloud of fire’ (L8).

As though a burning desire to unleash all of his thoughts and feelings through poetry is all around him as though in a cloud of smoke.

The use of colour has great effect to the tone of the poem. The colour reflects the emotion in the poem. As the sun goes down the bird fly’s higher and sings more which is a parallel to the poets emotions becoming deeper and the colours used in the poem also become deeper in order to reflect these feelings and emotions. ‘The blue deep thou wingest, And singing still dost soar, and soaring ever singest’ (L9-10), ‘Of the sunken sun’ (L12). ‘Like an unbodied joy whose race is just begun’ (L15). The time references used in line 12 and 15 are also typically romantic in the way that a lot of consideration is out into the thought of time passing. The romantic theme of Heaven or somewhere similar is often referred to throughout the poem. This is typically romantic as this place is in the poet’s imagination, therefore this can be attached to the popular trend of using the first person.

This place is the poet’s own vision of their perfect place. ‘That from heaven, or near it’ (L3), ‘Like a star in heaven’ (L18). The poem compares itself to the bird and is decided that the birds song will always be more perfect than the poem as the poet can not help but reflect his poetry on things that are happening in the world which are not perfect. As the bird has no knowledge and care for these issues it’s melody is not affected by human sorrows. ‘Till the world is wrought, To sympathy with hopes and fears it heeded not:’ (L39-40), ‘What love of thine own kind? what ignorance of pain?’ (L75). Despite this the bird does have some similarities with the poet they are both creative and spontaneously create their own arts. The bird with it’s song and the poet through his poem. ‘Like a poet hidden, In the light of thought, singing hymns unbidden’ (L36-38). Height is also often referred to in the poem, which is another typically romantic theme, to see the world in the poets own point of view. ‘In a palace tower’ (L42) ‘Thou dost float’ (L14), ‘That from Heaven’ (L3).

The melancholic theme is first felt on the ninth stanza with the princess alone in a tower, singing for herself. Just as the bird sings for itself and the poet writes for himself. ‘In a palace tower soothing her love-laden, Soul in secret hour’ (L42-44). The bird is alone in the sky and if the bird is a metaphor for someone which has been lost to the poet he to would be feeling alone. This is similar to the rose it has now gone but the smell and memory that it was once there still lingers ‘By warm winds deflowered, Till the scent it gives’ (L53-55). The romantic melancholic feelings are repeated in that even though he feels alone he finds joy in the poetry as the bird entertains itself though song ‘joyous and clear, and fresh, thy music doth surpass;’ (L60) The poems inspiration comes from the bird the poet feels that if he could know what the bird was thinking his poetry would become as good as the birds singing. ‘Teach us, sprite or bird, what sweet thoughts are thine’ (L61-62).

Another typically romantic theme of the romanticists is desire, which is also mentioned in the poem. The poet wants to be creative and carefree as the bird is. ‘A thing where in we feel there is some hidden wants’ (L70). The bird is always happy as it has no knowledge of the feeling of sorrow and is incapable of feeling this way as it is oblivious and uncaring that these emotions exist. ‘With thy clear keen joyance, Langour cannot be:, shadow of annoyance, Never came near thee;’ thou lovest-but ne’er knew love’s sad satiety'(L76-80). The poet wants to be a Skylark and live in what he sees as a perfect existence free from the world of pains which he is living in. Although once you get what you want you are left with a feeling of loss which is the only emotion that can fill the gap where desire used to be. But if I were only able to think and feel the way you do I could teach the world how to live happily. ‘Teach me half the gladness’ (L101), ‘The world would listen then-as I am listening now’ (L105). I have been inspired by you and now though my poem the world will also be inspired.

A Poem To a Skylark by Shelly. (2016, Jun 20). Retrieved from http://studymoose.com/a-poem-to-a-skylark-by-shelly-essay 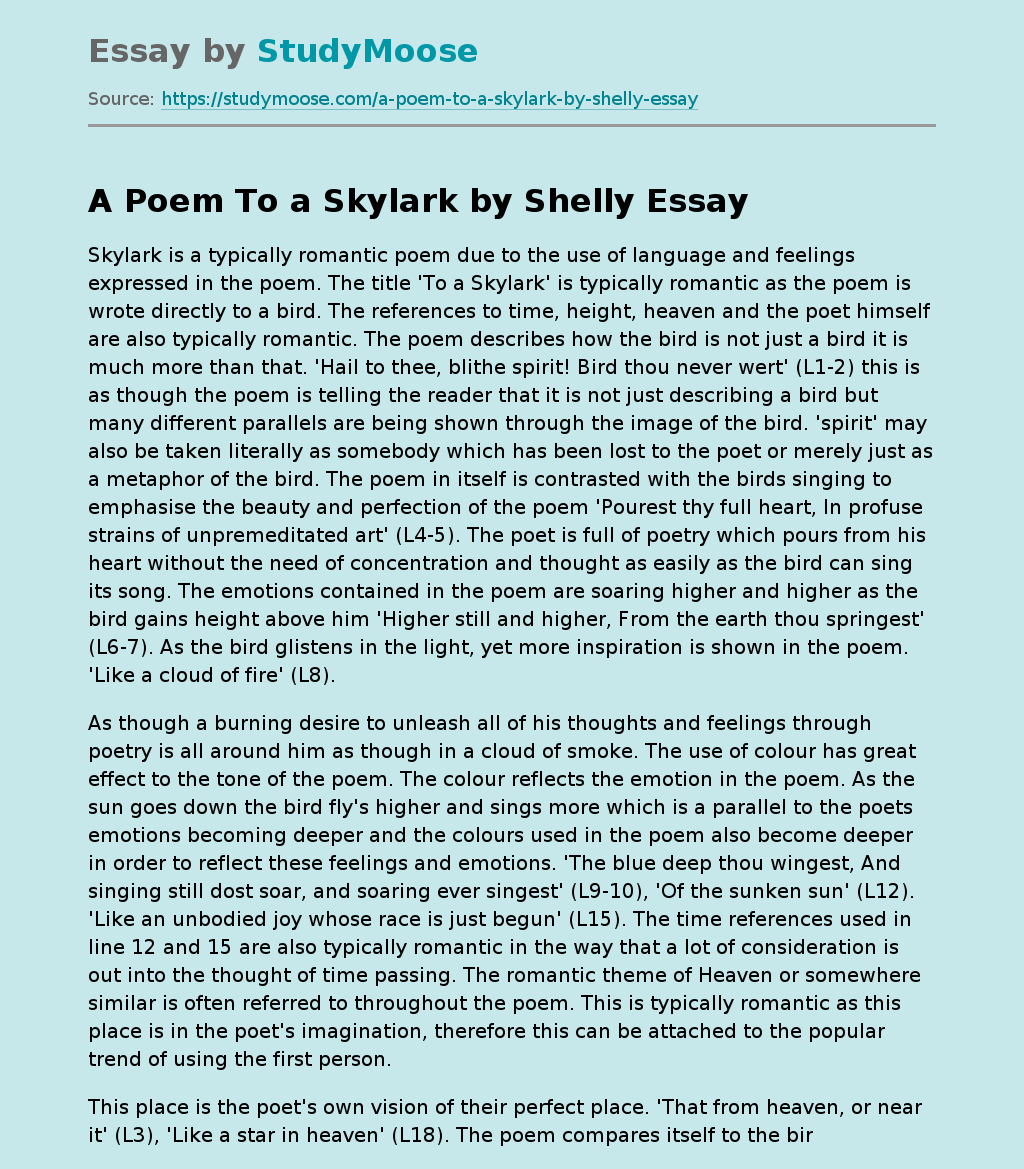