The Correlation Between Behind Story and Symbol in Shelly’s Ozymandias

Symbol is important in our life because symbol can be used to give information through picture, line, color, etc. For example, symbol that gives information or command through picture is picture mosque that usually presents in both side of the road. It gives us information that there is mosque near that road. Other example, symbol that use color. As we have seen every day traffic light in road unconsciously organize rider and driver that use the road. Each color has different meaning, red is stop, green is go, and yellow is be careful or down the speed.

Don't use plagiarized sources. Get your custom essay on
“ The Correlation Between Behind Story and Symbol in Shelly’s Ozymandias ”
Get custom paper
NEW! smart matching with writer

From the examples above we can see that symbol is necessary in our life to understand both gesture and symbol like above to avoid a mistake with other people.

In literature symbol is as important as in our daily life because in literature especially in poem, symbol has main role that make poem more attractive. Symbol usually represents other meaning of the real form or give an analogy that representing situation or meaning that poem want to convey.

Moreover, “symbol” is applied only to a word or phrase that signifies an object or event which in its turn signifies something, or has a range of reference, beyond itself. (Abrahams p. 324) So this paper tries to discuss, what is the correlation between behind story and the symbol of the poem Ozymandias.

Poetry is a type of literature that expresses ideas, feelings, or tells a story in a specific form (usually using lines and stanzas).

Moreover, poetry is language that makes abundant use of figures of speech and language that aims to be powerfully persuasive (Culler p. 68). Then, Aristotle asserted the value of poetry by focusing on imitation (mimesis) rather than rhetoric. He argued that poetry provides a safe outlet for the release of intense emotions (Culler p. 69) Let looks the poem ozymandias, it is sonnet poem which consists one stanza, which consist 14 lines. Ozymandias is poem which have been written by Percy Bysshe Shelly in 18 December 1817. Ozymandias is poem which tells story of portrait broken the king Ramesess II dynasty.

King Ramesses II is the king of Egypt which called ‘Pharaoh’. Why this told story about the king of Egypt because we can see in the first line “ I met a traveller from an antique land “; antique land symbolize the Egypt because Egypt is country which have a lot of history cite and antique things. Then “two vast and trunkless legs of stone stand in desert” symbolize the remnants of Ramesess dynasty which built to prove his powerful. Moreover, the sixth, seventh line and eigth “and wrinkled lip, and sneer of cold command” and “tell that its sculptor well those passions read”, and “which yet survive, stamped on these lifeless things”.

These line symbolize that the person who is told was great person in that time and the statue that make by people as the symbol of his power symbolize his personality. Then it emphasize in line 10th line “my name is ozymandias, king of king”. This line show that he consider he is the king of all kings but in real he just king of Egypt and it symbolize how so arrogant he is! Then name’s ozymandias is name from and Greece word “ozy” means air the “mandias” means rule, so it become the rule on the air. He is conveyed as king who want to achieve the power of all world but it waste because no one could achieve the power on the air.

The line 11th “look on my work, ye mighty and despair!” he want to prove his power through all thing that he made that symbolize his power, explicitly he want to challenge both society and king from around the world to changeling with him to prove who is the strongest and most powerful. But in line 12th and 13th it is refused because whatever that he have made was nothing because it will broken eat by the time and just engraving. The dynasty that he hoped will show his powerful was disappeared and left just cite and engraving on the pedestal is no applies again because he is no longer king again.

The line 14th “the lone land and level of sand stretch far away” this emphasize that this dynasty was disappeared and now just empty desert and all around just sand and sand. This is one of the Ramesess mistake because in his leadership he just tried to show his powerful through the temples and monuments that he thought it will make all of the king in the world will afraid with him but it become curse for him and his society because he forgot about the “world tires” that sometime we will in the up but sometime we will in the down. He too focus in the present when his dynasty is prosperous and he try to make it still without though that all human being will die someday and all of that he achieve and have will be left in the world.

From story that become behind story of the poem we know that the life of Ramesess that so arrogant and make so many history cite in Egypt that become sign of his powerfulness dynasty tried to keep what he get in the world without afraid to the god. So, in the end he was dead because we know that all human being will dead and we will left what we have such as wealthy, pride, throne and everything that relate to the worldly in the world. The last symbol that is used in that poem has strong correlation with the behind story of the poem itself, especially behind story of king Ramesess II in Egypt.

The Correlation Between Behind Story and Symbol in Shelly’s Ozymandias. (2016, Nov 01). Retrieved from https://studymoose.com/the-correlation-between-behind-story-and-symbol-in-shellys-ozymandias-essay 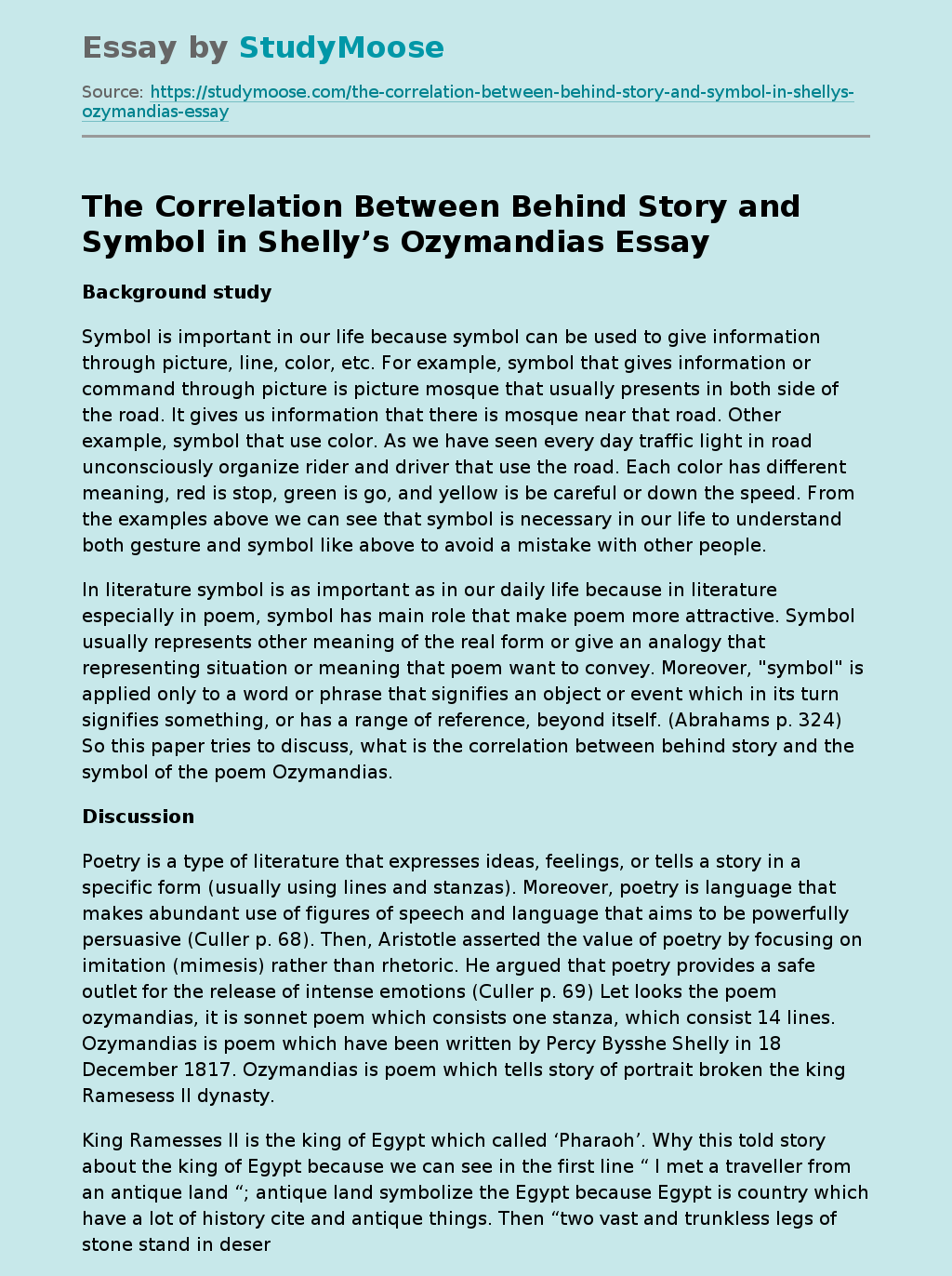