"A Good Man Is Hard to Find" by Flannery O'Connor Reading

*Re-read the Story “A Good Man is Hard to Find” by Flannery O’Connor , following the “Re-Reading Fiction Suggestions” above. Answer the following questions:

Are there any details that were newly recognized during this reading or that you notice tie in with earlier ones? I gained a better visual of the car the family was riding in while re-reading the story. I didn’t understand they were in a car, I had visualized the family riding in a station wagon. I also became aware of the fact that at the end of the story The Misfit picks up the cat after it had been thrown from the car and the grandmother had been killed.

Don't use plagiarized sources. Get your custom essay on
“ “A Good Man Is Hard to Find” by Flannery O’Connor Reading ”
Get custom paper
NEW! smart matching with writer

If evident, what significance does the title hold, and in what possible ways is it lined to the actions and the characters? The reference of a good man was seen throughout the entire story. I believe in comparison there is symbolism between the idea of a good man like Red Sammy versus a character like The Misfit is a direct representation of Good and Evil.

Are there any words that are unfamiliar, and how does knowing what they mean make a difference in re-reading the story? Valise (suitcase), Sachet (purse), Ambling (saunter: to walk leisurely). Knowing the definition of these terms allowed me to better understand the appearance of the grandmother and the setting inside of the car.

The first paragraph introduced the grandmother & her son. I was not very certain of the meaning of the last sentence but I took it as The Misfit saying that killing is not enjoyable. I found that as a contradiction to what he said about the bible saying there is only being good or being evil.

Are there any details/parts of the story that do not seem needed or appear insignificant? What do you think might be the purpose for these insignificant parts? I did not understand the necessity in the grandmother wanting to keep track of the car mileage. It made no sense to me at all and wouldn’t have affected how I read or re-read the story.

*Listen to the Audio Recording “Flannery O’Connor Reads ‘A Good Man is Hard to Find’” (1959). Then, answer the following questions:

How does knowing more about Flannery O’ Conner’s life and work, particularly her earlier artistic endeavors from the NPR Portrait, inform your reading of the story? From reading about her life it seemed like Flannery O’Conner always used cynical humor in her cartoons and stories. She seemed to be an emotionally “dark” person. Knowing this before I read the story might have helped me lower my expectations for a happy ending.

How did you find the experience of listening to Flannery O’Conner reading her story aloud to a live audience? Did you expect the audience to react when and as they did, and did you share their reaction as you followed along? Did you gain any new insights about the story, and any of its elements or details, from listening to the O’Conner’s oral presentation of it in the recording?

I felt that by listening to Flannery O’Conner read this story aloud I was able to become more emotionally attached to this story. The humor was very evident in the reading but did not bring out a verbal response from me. I did find myself laughing aloud once or twice when I was listening to the reading. I found the one detail that I had not noticed in the previous reading was that The Misfit kept the cat at the end of the story.

What further hints does she give us along the way?
It mentions The Misfit and that he was headed to Florida. In the 5th and 6th paragraphs as well, foreshadowing is touched on when John Wesley was asked what he would do if caught by The Misfit.

There are also instances that hint about the family getting into an accident. In paragraph 10 the author wrote that the grandmother dressed as a lady in case they were in an accident so that others would know she was a lady (which in truth became fact because The Misfit noted her as a lady because of her clothing).

I believe that death was pointed out in the 8th paragraph in a more symbolic. The grandmother feared the death of the cat and it was because of the cat that the entire family (with exception of the cat) wound up dying in the end.

How does the scene at Red Sammy’s BBQ advance the story toward its conclusion?
Personally I don’t think it does at all. I feel like it was unnecessary.

What do her various remarks reveal about her?
It seems like she always spoke up when she wanted to get her own way.

Does she remain a static character, or does she change in any way as the story goes on?
I think she remains a static character throughout the entire story. She starts out as a selfish character that is out to get what she wants and in the end (although for a moment you see her as a pained parent) she still is saying whatever she can to save herself.

When the grandmother’s head clears for an instant, what does she suddenly understand? She understands that she has made a huge mistake. The plantation she had been talking about was in a completely different state and instead of speaking up and telling her son she kept the thought to herself because she didn’t want to be held responsible for her mistake.

What do we learn from the conversation between The Misfit and the grandmother while the others go out to the woods? You learn about The Misfit’s family history, his belief in Jesus and you learn that The Misfit believe that no matter the bad deed you eventually forget about what you did.

How would you describe The Misfit’s outlook on the world?
He has a very black and white view. In the story The Misfit says, “ If He did what He said, then it’s nothing for you to do but thow away everything and follow Him, and if He didn’t, then it’s nothing for you to do but enjoy the few minutes you got left the best meanness to him. No pleasure but meanness”. I read that as his belief that by the Bible you either did exactly what it said to do or you acted as an Anarchist.

How would you respond to a reader who complained, “The title of the story is just an obvious platitude” ?
I would say that that conclusion could only be reached after reading the story. When you look at the title there are too many routes that the story could have taken to make it an obvious statement about the contents of the story.

"A Good Man Is Hard to Find" by Flannery O'Connor Reading. (2016, Nov 27). Retrieved from http://studymoose.com/a-good-man-is-hard-to-find-by-flannery-oconnor-reading-essay 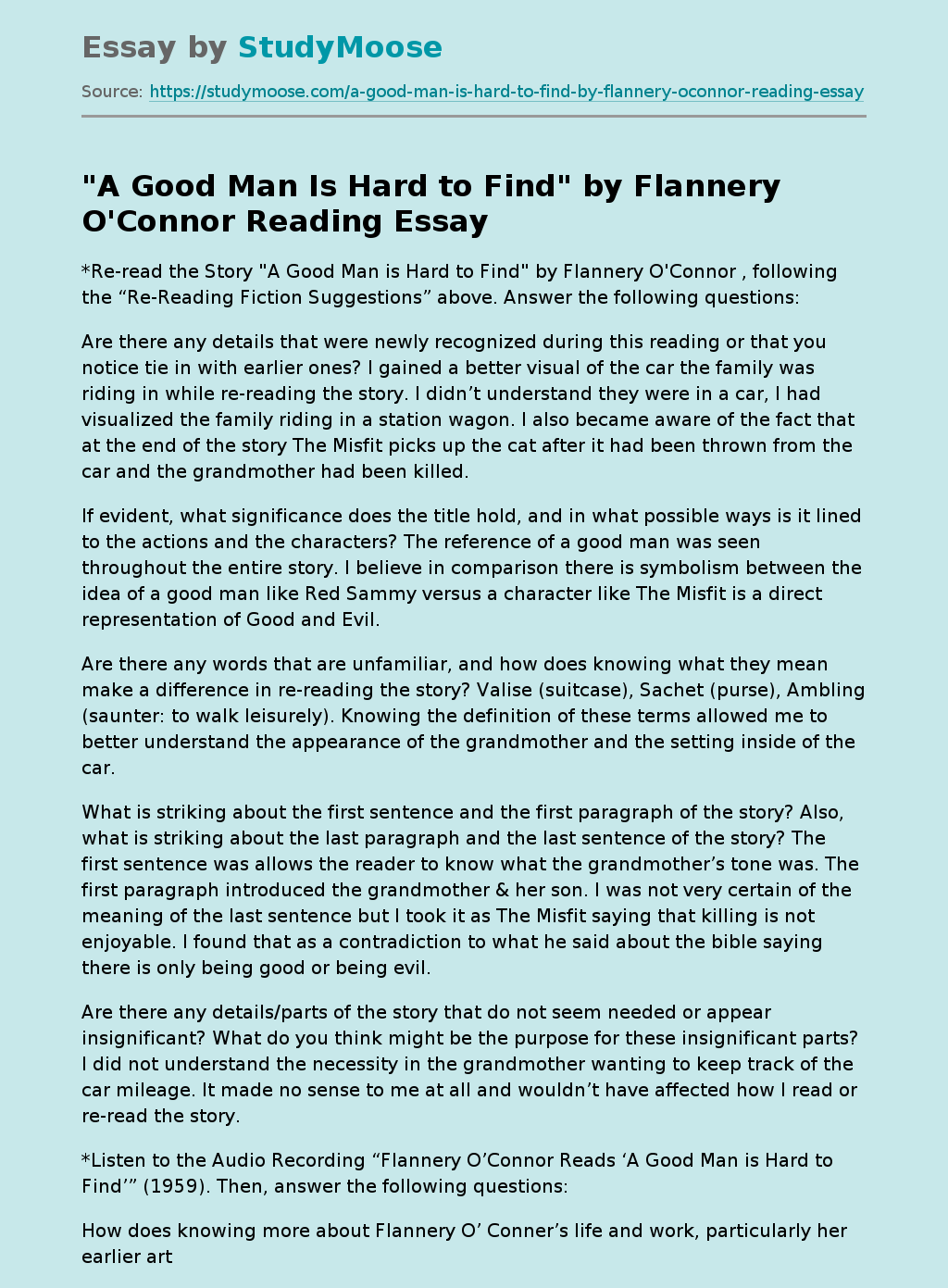