A.E Housman is strongly against the idea of modernisation and most of his work is a half imaginary world in the ‘land of lost content’ where he is driven by the old ways of life.

Through the young soldiers in ‘The Recruit’ and the athletes through ‘An athlete dying young’, Housman is able to explore the helplessness of a man in an alien universe.

Housman became sensitive to earthly beauty after the death of his mother when he was just 12.

I believe this is what drove him to write some of his poems which are based on meaningless and painful human mortality. However, the death of young heroes is praised by Housman as he believes it is best to live fast and die young. To die young as a hero means you will always be remembered for something amazing you did and died for, whereas if you lived on after the heroic act the heroism wears off and you end up dying and not to be remembered.

Respect is gained by going out with a bang, doing something which will be recognised and dying for it.

The poems are sensitive, focusing in the parting of friends, the loss of youth, young lives and unpredictable and meaningless deaths, all which build up emotion.

The first poem I am analysing is called ‘The Shropshire Lad I’ which is an emotional poem backed by Housman’s idea of dying young as a hero. It is related to the first World War when soldiers were lost to fight for and protect the country and the Queen.

In the third stanza on the third line, the word lad is emphasised as it is followed by a comma separating it from the other words and the rhythm. These soldiers are young and are dying to protect the Queen but shall be recognised for their acts and bravery.

The neatness of the final lines in the fourth stanza intensifies their horrific irony. The perfect regularity of rhythm and rhyme brings emotion and impact to the stanza which is important because it adds the emotion to the poem emphasising the point of young men dying to protect the country and the queen, and risking their lives in order to do so. It’s ironic how they should be fighting to protect the Queen yet they are unable to save themselves. In the fourth stanza there are no enjambments so the lines are more emphasised on their meaning, making them more important. It reads more slowly which makes it very emotional.

The next poem is called ‘A Shropshire Lad II’ and this poem concentrates on Housman’s appreciation of the earth’s beauty. It has mixed emotions of happiness and joy for the time of year but can be seen as a sad poem as I believe that Housman was driven to write this poem due to the death of his mother. He is showing how he appreciates such small things which would otherwise be taken for granted. He uses the tree as if it were a calendar counting down the years he had left to live. That is how important the tree must have been to him that he should compare how long he has to live with it. He is very upset by the thought that he only has supposedly fifty years left to see the tree. The enjambment used in the last stanza for the first two lines increases the speed emphasising tits importance. The final stanza is the only to have perfect iambic rhythm all the way through it, this may reflect the importance of the tree to Housman or how perfect the tree is or the way in which he will continue to see the tree every year in the same way for as long as he shall live.

The poem is short and simple, I believe this reflects the idea that such small and simple things such as the cherry tree can be taken for granted when in fact they can give someone much joy and happiness. The poem is very short which possibly reflects the idea that Housman believes he has very little time left to see the tree. The poem is read very fluently encouraged by the use of enjambments making the poem very light hearted. It reads quite naturally, like the tree and its surroundings are natural. The second line in the second stanza has the smallest number of syllables so it is read the quickest which adds emotion and emphasis to the point that he has been alone twenty years of his supposed seventy and has only therefore got fifty to go. I believe this was done to build up emotion and to make a point of how much the beauty of the tree really means to him. It is a reflection of something so beautiful that he wants to see so he counts the time left to see it.

The next poem is aimed at soldiers going to war, to be brave and heroic and die for their country. The poem reflects Housman’s views of living fast and dying young. Notice how in the first line, the word ‘lad’ is emphasised by its separation from the other words and the rhythm by the use of a comma. This makes a point of the fact that young men are going out to war to die for their country.

The poem is well structured and can be read as if by a sergeant talking to his new recruits. This shows it has structure, order and is regular such as the life of a recruit. Organised structure fits in with the idea of regularity and order of a recruit for the army.

The first stanza is encouraging the recruits to join together and leave their homes to fight. This point is emphasised on the third line where the words ‘And go’ are separated from the other words by the use of a comma. Housman is keen to see the recruits leave to go and fight so as to die as heroes and be remembered for what they did.

The fourth stanza sums up Housman’s attitude towards the recruits and the poem. He writes ‘Come you home a hero, Or come not home at all’. This stanza veers off from the idea of them coming home which the two previous stanzas almost supported, Housman is almost telling the recruits not to bother coming home.

The poem remains ordered while fluent with a large use of enjambments making the poem read quickly making it more emotional and dramatic. It is a harsh and brutal poem in the way it reads but this is what a recruit could expect from the army.

The next poem I am going to analyse is called ‘To An Athlete Dying Young’. The title is supporting the idea of Housman’s theory as it shows he is paying his respect to this young person who died young and as a famous athlete.

The poem is very emotional which is emphasised by the fast rhythm and rhyming couplets. The first two lines of the first stanza flow quickly with the use of enjambment, this is to make the occasion of the athlete winning the race more memorable and special. It indicates to us the speed at which the athlete ran, adding meaning and sensitivity to the poem, making the athlete an even more famous hero. However the next two, the last two lines are read slowly as they are broken up by the use of a comma. This sudden change in the reading of the poem leads to the reader feeling sad and sensitive. We realise at this point that in fact the people of the town are carrying the athlete above their shoulders in a coffin. The slow reading of the lines builds up emotions and pain.

The second stanza is also very upsetting and is broken down by the use of commas making it read slowly and passionately. 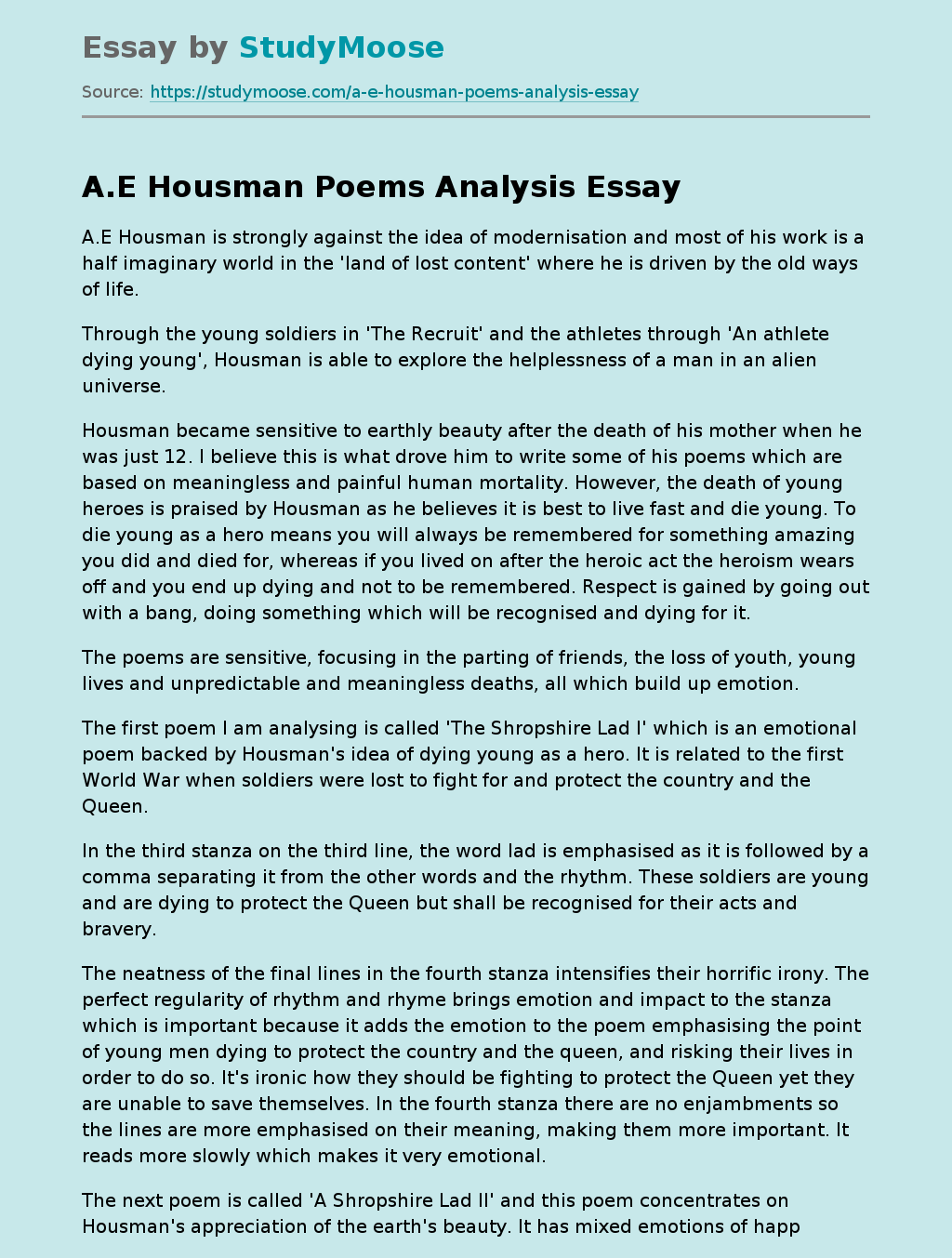