This article criticizes President Aquino’s fourth State of the Nation (SONA). Research critiquing is a valuable skill, to gain as it enables to develop and improve knowledge and skills. The ability to analyze enables individuals to gain knowledge.

President Aquino on Monday, July 22, 2013 delivered his fourth State of the Nation Address (SONA). They said that it was Pnoy’s longest SONA so far, but has been applauded less frequently compared to last year. The President began his SONA by recalling how he started, nearly four years ago, a group of influential people persuaded him to run in the 2010 presidential elections just when her mother died, promising him that while serious problems chase the country and assured him they would help him face the challenges all the way, he recalled.

Don't use plagiarized sources. Get your custom essay on
“ A Critique Paper ”
Get custom paper
NEW! smart matching with writer

So, President Aquino began his journey, his difficult journey.

The SONA covered a lot by pursuing what his government aims, in the rest half of his term to fulfill the promise of true human progress: expanding the number of housing beneficiaries, classroom shortage will be addressed by the Department of Education within the year, improving rice self-sufficiency and coconut intercropping to boost agricultural growth, pass the Bangsamoro Basic Law in 2014 which will pave way for a Bangsamoro Government by 2016, Repairs and completion at NAIA Terminal 3 and alike.

In staying in this country for almost 20 years, I have pondered that Filipinos only want and aim one goal which is letting the Philippine economy rise up again and free from the liabilities and debts we had from the preceding government.

Filipinos only aim to clean the messes and clutters that we had. I think nobody would want to stain the name of our very own country once again because the only one that suffers are we, the citizens of this country. And we cannot disregard that everyone, meaning all the rich and poor will be affected if our government will shift to its other way again. Since, President Aquino rule the country now for still continuing his half term, I guess Filipinos/ all we need to do is support him and have faith. I know and we all know that giving him burdens and troubles wouldn’t help everyone, but only pull this country down.

Anyway, the President’s State of the Nation Address (SONA) I guess says a lot of positive improvements in the country. I felt glad because as I recalled about the previous government ran by Miss Gloria Macapagal Arroyo, I realized that Pnoy’s government did make changes in the Philippine society by his platform “Matuwid na Daan”. Although I cannot say that it is a lot, but at least he did the Philippine economy rise up again and move in a little comparing with the previous management. The President said and cited a lot of plans for the country. I just hope that all of his plans will be achieved for still having the rest of his half term in the throne. 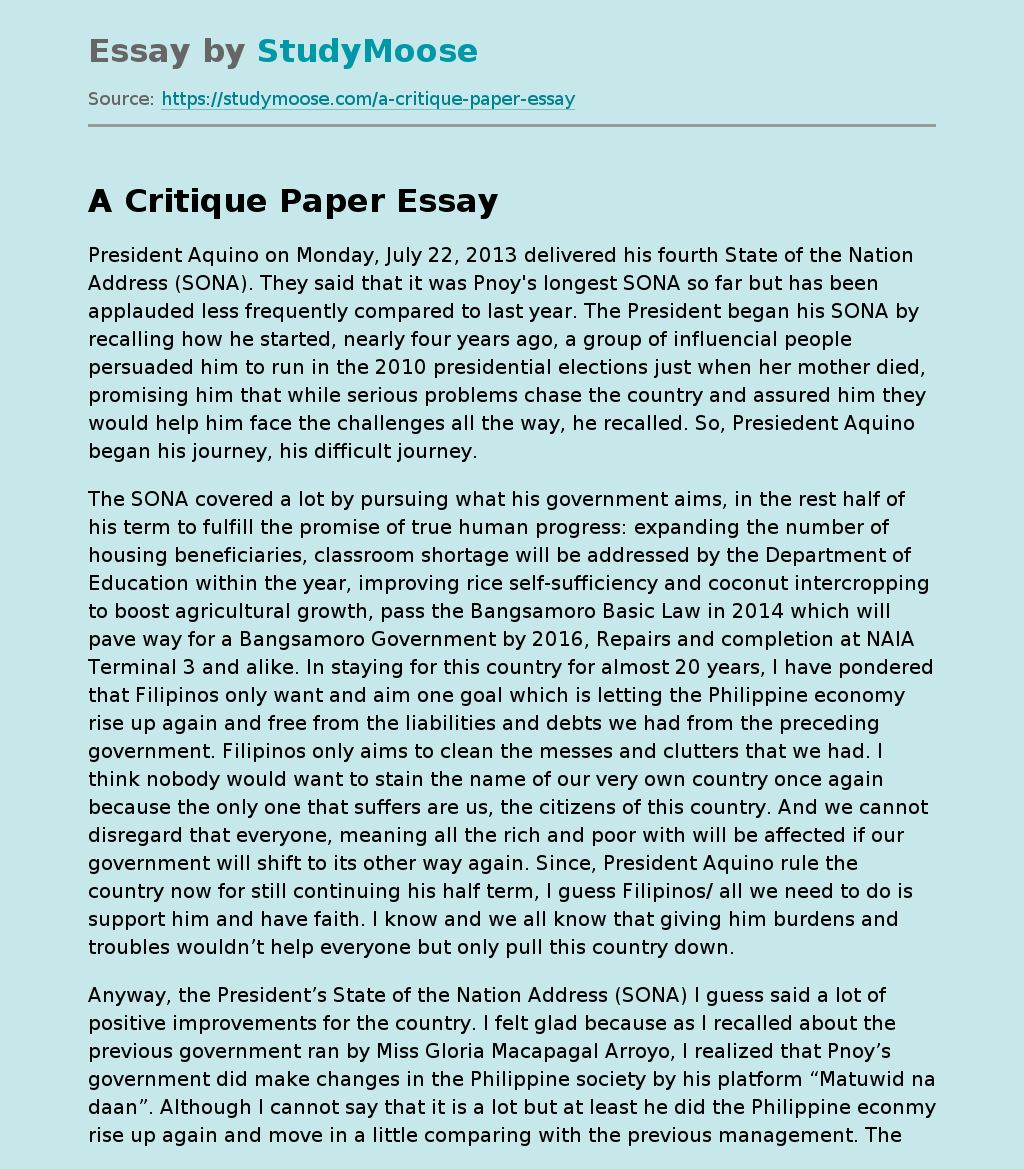