The Making of a Hero - Ninoy Aquino

In 1983, Ninoy Aquino affirmed his resolute claim, “The Filipino is worth dying for,” by giving up his life for his countrymen. In time, they responded in similarly heroic kind, “Ninoy, hindi ka nag-iisa”—and, led by his widow, Cory, achieved the political apotheosis needed for Ninoy’s assassination to be transformed into martyrdom. But, 25 years later, can the now liberated Filipino also resolutely aver, “Ninoy, hindi ka namin nakakalimutan”? The youth, especially, generally have only a vague notion of what the slain opposition leader stood for, and why he gave up his life.

Don't use plagiarized sources.
Get Your Custom Essay on The Making of a Hero – Ninoy Aquino Just from $13,9/Page

That’s a pity for Ninoy, but a tragedy for the youth, because it deprives them of the heroic example they need to energize and transform their own lives.

Happily, the Foundation for Worldwide People Power has produced its latest documentary, “Beyond Conspiracy: 25 Years After the Aquino Assassination,” which we previewed and discuss by Mr. Totanes, the speaker last Monday at Richard Fernando Hall, Ateneo de Naga University.

Its aim is simple: to “affirm the historical significance of the Aquino assassination to the youth, many of whom have very little knowledge of this tragedy and its profound impact on Philippine society”. It is also for “those who have grown indifferent, convinced that Ninoy died in vain.”

It has been 25 years, but Ninoy’s dreams for the Filipino people live on. Do not forget. Despite events that seem to have wiped out the hopes born out of Ninoy’s death, his sacrifice was not in vain. Like what I’ve said earlier, Ninoy said that “the Filipino is worth dying for.” He didn’t have to return, because he knew what it could cost him. But he did, because he had great hopes and believed that we can achieve great good. We are the ones he died for. Our freedom is what he gained for us, though he did not taste it himself. We have made a mess of many things in the country. But as long as there are those who will not forget the value that Ninoy has put on the Filipino, there is hope for change. Ninoy’s legacy lives on. He was our hope. He was the one who was to bring change. He did eventually catalyze radical change in the political landscape of the Philippines, but at great cost to himself.

The Making of a Hero – Ninoy Aquino. (2016, Apr 20). Retrieved from https://studymoose.com/the-making-of-a-hero-ninoy-aquino-essay 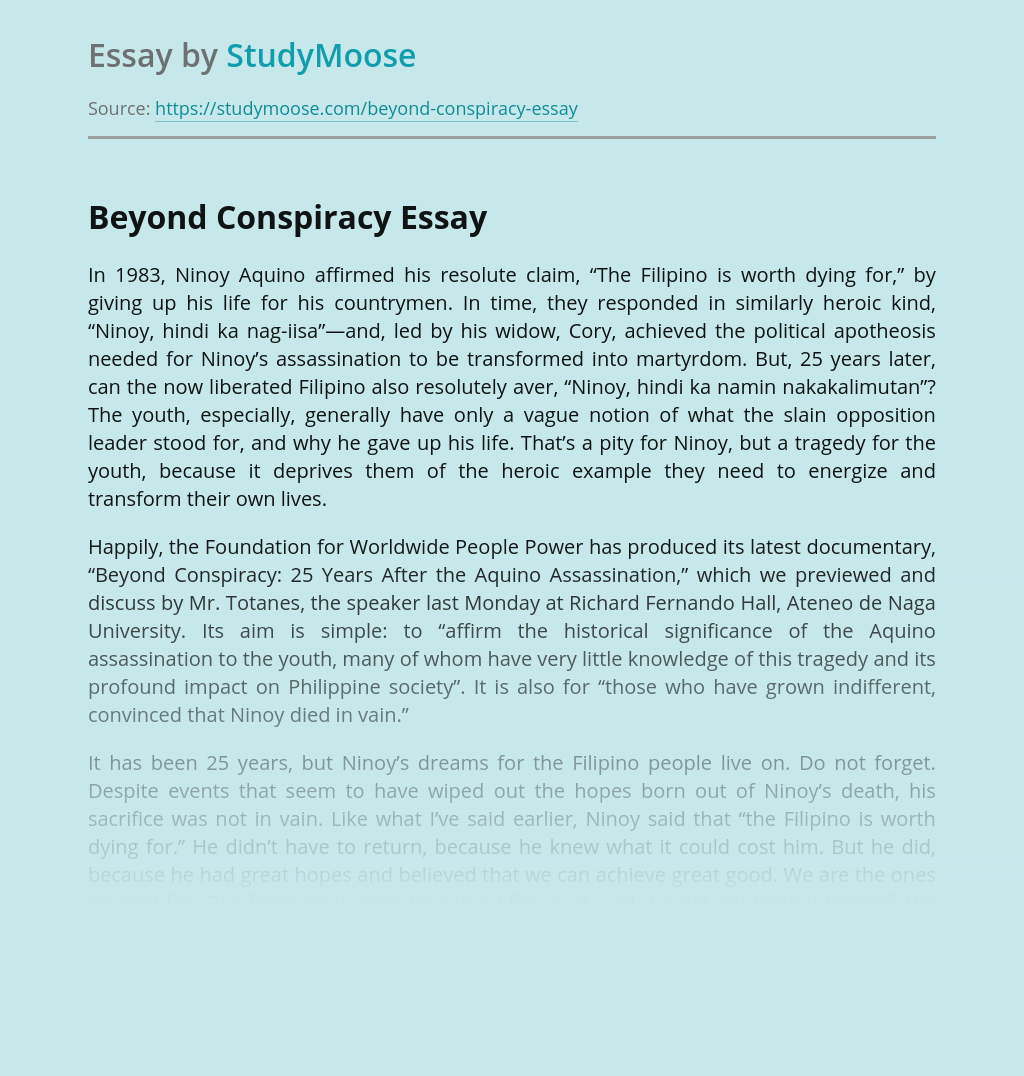 The Matrix in relation to the clasical hero's journey

Rate this post In the film “The Matix” the main character Neo is taken on a journey that by all acounts seems to fit the model of the classical “hero’s journey” pattern. From his call to adventure by way of Morpheus, to the road of trials that included his meeting with the Oracle, he experienced...

The Making of a Hero - Ninoy Aquino

Rate this post In 1983, Ninoy Aquino affirmed his resolute claim, “The Filipino is worth dying for,” by giving up his life for his countrymen. In time, they responded in similarly heroic kind, “Ninoy, hindi ka nag-iisa”—and, led by his widow, Cory, achieved the political apotheosis needed for Ninoy’s assassination to be transformed into martyrdom....

Rate this post The story of Cinderella is a magical fairy tale that children of all ages and backgrounds are familiar with. It’s an enticing tale since it includes magic and whimsy, oppression, love, perseverance- all of the important things that are consisted of in the story of a hero, or in this case, a...

Rate this post Chinese food has a long history with more than 5,000 years. Different area has different kind of cooking. Also, different style of cooking has different characteristic. Chinese food covers a lot of the delicious tastes from all over the country. First, Cantonese cuisine is delicious and attractive, which is always my favorite...

Why is Nick Carraway Fascinated in Gatsby?

Rate this post Throughout “The Fantastic Gatsby”, written by F. Scott Fitzgerald, we witness Nick Carraways compulsive fascination of Gatsby. Nick states at the start of the book that he is ethically warded off by the indecency of all the characters he meets throughout his stay in New York, with the exception of Gatsby. Although...