Rhetorical device Project on Pearl Harbor Address to the Nation

The Japanese Empire bombarded Pearl Harbor on December 7, 1941 it was a surprise attack to the United States. This event caused the loss of many innocent people as well as material destruction to the country. Franklin D. Roosevelt was the president during that time, his duty was to address both, the nation and the Congress to inform them about what had happened he did this through his speech “Pearl Harbor Address to the Nation”. The speech was extremely important, not only because of how delicate was the subject, but also because he had the challenge to inform two very different audiences about the occurred.

Don't use plagiarized sources. Get your custom essay on
“ Rhetorical device Project on Pearl Harbor Address to the Nation ”
Get custom paper
NEW! smart matching with writer

His first audience was Congress which was important because in the end they would determine whether or not to go to war. Also the nation would listen to this speech, while Congress got to see and hear him during the speech Americans would only hear the speech through radio, which made this an even harder task to accomplish.

He accomplished two things at once because by addressing both audiences in one speech he shows that he had them both in mind. He did not include the kind of language that the nation would not understand just because he was talking to congress. Also he did not deliver the speech on a manner that would not be appropriate for Congress he used just the right language that would be understood by both audiences.

Another important aspect of this speech that made it so successful is the way that he delivered the speech. He knew that the nation would be listening to the speech and he obviously knew that Congress would be present when he would be delivering the speech. Therefore he had to use a tone that would accomplish the purpose of the speech. This had two purposes first to inform his audience about the occurred and second and most important to keep the nation calmed and assure them safety. He does this when he informs the audience that, “the United States of America was suddenly and deliberately attacked…” although this was something very shocking he managed to stay calmed and transmit that to others. He also assures safety, “I have directed that all measures be taken for our defense…” which gives the nation some kind of tranquility knowing that things are being taken care of.

Roosevelt’s tone was very calm yet very powerful as it is shown in Fig. 1, when he is presenting his speech to Congress and the nation. As a result of Roosevelt’s capability to address two audiences at once and to deliver the speech with an appropriate and effective tone the speech was very successful. He successfully informed the audience about what happened without causing confusing in neither of them. He used the appropriate language to address both the Congress and the nation. Roosevelt was also aware that his speech would be presented to the audience in two forms, via radio for the nation and in person to the Congress. This played a big role in how he delivered the speech but he managed it very well and used a tone that projected confidence in providing safety for the nation and was powerful enough to ensure that things would be taken care of. Roosevelt delivered this speech very well and the outcome was good. 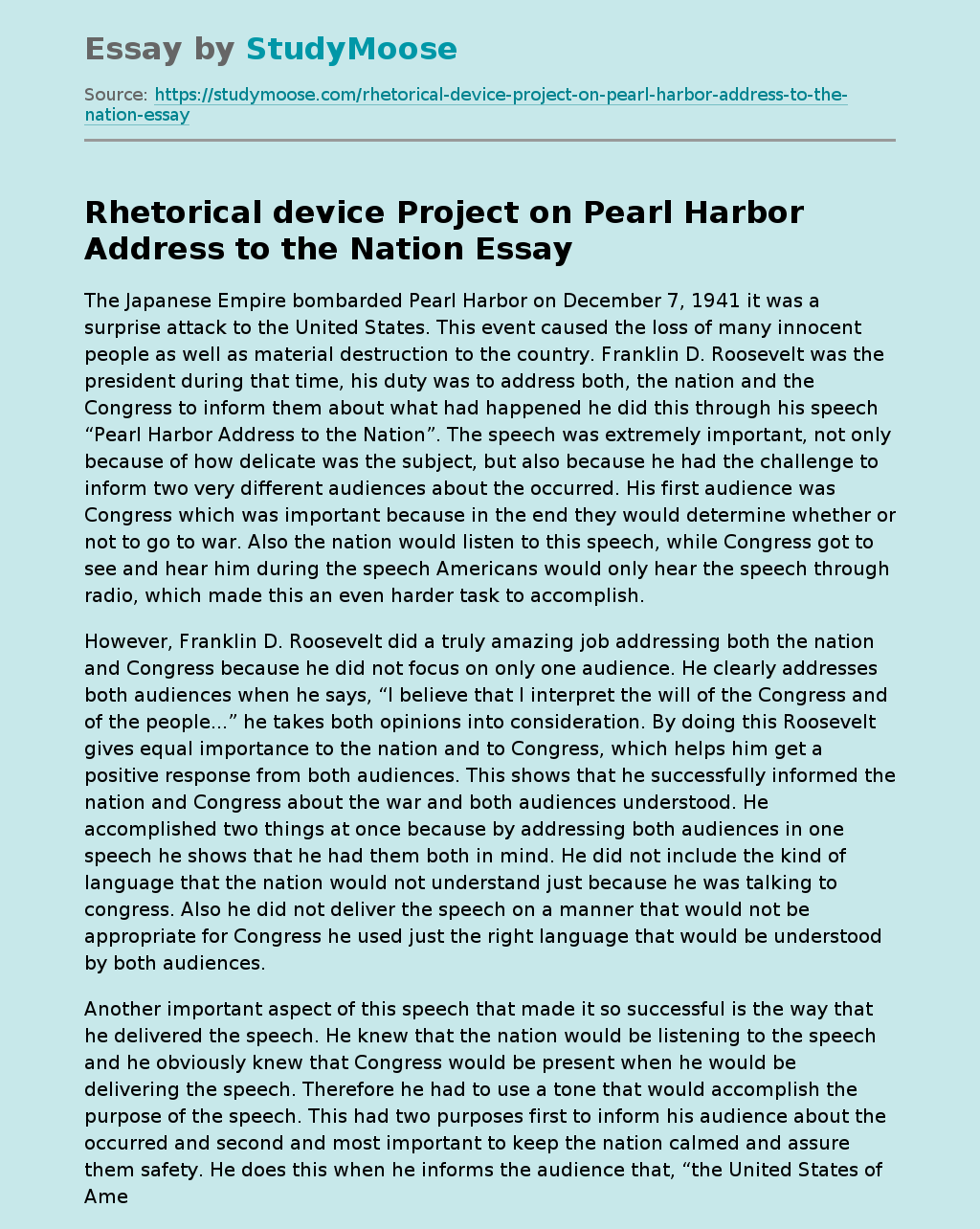