A Critical Review of Erikson'sTheory

The Psychosocial Stages of Development is Erik Erikson’s major contribution to personality formation. According to his theory, an individual passes through eight stages of development. Each stage has its own unique characteristics.

This paper will focus on the strengths and weaknesses of Erikson’s Theory as well as its application to adult learning and in real life.

A Critical Review of Erikson’sTheory

Erik Erikson’s Psychosocial Stages of Development holds a significant place as far as studying and understanding human development is concerned.

His place in psychology cannot be discounted because of the contribution he gave to the field. Although Erikson’s theory is similar in some aspects with other personality development theories, there are some unique distinctions as well(Marshall, n.d).

His theory is comparable with Freud’s theory in a sense that both of them believed that the development of an individual passes through various stages. The difference between the two theories is that while Freud’s development stages focus on the libido or sexual drives, Erikson’s psychosocial stages focuses on the evolution of social traits(Marshall, n.

According to Erikson’s theory, an individual passes through eight critical stages throughout his life. Each of these stages have their own unique attributes and time period. As the individual goes through each development stage, their ultimate goal is to successfully complete each stage before they can proceed to the next. Failure to complete a stage may have unfavorable outcomes to the individual(Chapman, n.

For instance, in Erikson’s sixth stage of development which is Intimacy vs. Isolation, the failure of the child to develop socialization skills or the ability to form relationships may cause him to become a loner, individualistic, uncomfortable with other people, and others(Chapman, n.d).

Erikson’s theory indicates that throughout the life of an individual, they will experience a certain crisis. In the development stage mentioned above, the conflict they experience is their inability to develop social skills(Chapman, n.d).

The psychosocial stages of Erik Erikson is an implication that the formation of individual personality does not stop in childhood but is a lifelong process. The negative consequences of incomplete stages may manifest themselves during the later stages of life which is why it is important to as much as possible succeed in each stage(Chapman, n.d).

For individuals who successfully completed each stage, they will have an idea of what to do when they are faced with a similar situation. Most of the time, these individuals tend to be stronger amidst the adversities of life(Chapman, n.d).

Another implication of Erikson’s Psychosocial stages of development is that the person will have a better understanding of themselves, their strengths, weaknesses, their skills, abilities, and others(Chapman, n.d).

Critical Analysis of the Theory

An in-depth criticism of Erikson’s theory is presented by Professor George Boree of Shippensburg University in Pennsylvania. He raised the following points concerning the psychosocial stages of Erikson(Boeree, n.d):

Things happen in a certain sequence and not because of biological programming. For example, one cannot have the ability to love unless they have developed sexual maturity.

The timing for each stage may vary from one culture to another. For instance, a baby can start talking earlier or much later than what is indicated. Nowadays, people get married even before reaching 18 or 21 years old.

Erikson’s theory is applicable and useful to various cultures and in any period. It is applicable to current and future generations.

Understanding of the self is a life-long process. It does not stop at Stage Eight of Erikson’s Psychosocial Development. Likewise, identity crisis can take place at any point of life. The most important thing is that parents play a major influence in the successful formation of their child’s personality. 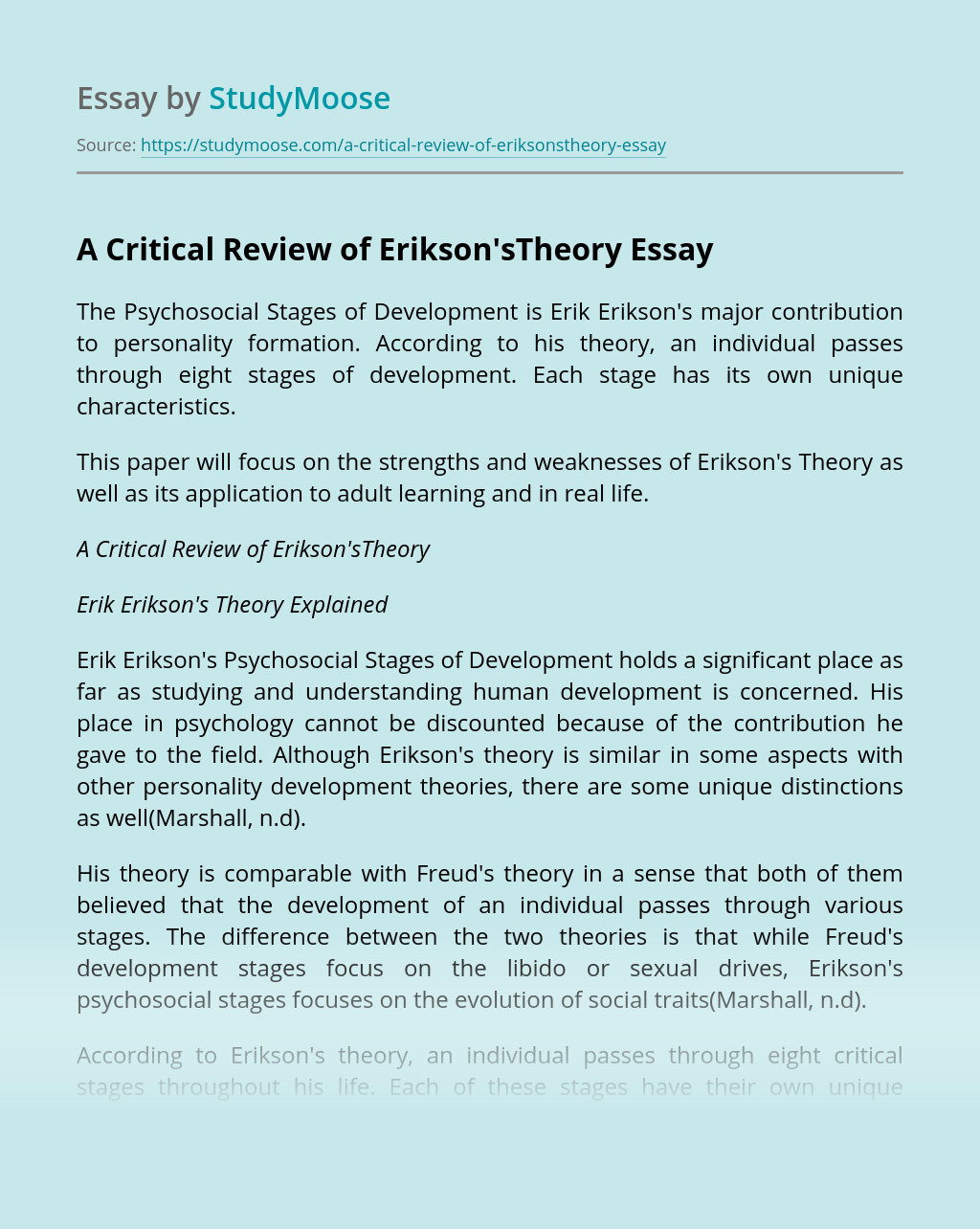 Don’t waste time
Get a verified writer to help you with A Critical Review of Erikson’sTheory
Hire verified writer
$35.80 for a 2-page paper
Stay Safe, Stay Original