The Chicago Shakespeare Theatre at Navy Pier manages to combine an extravagant and lavish, while at the same time still very intimate, theatre setting with professional acting performances in every production shown. However, the production of As You Like on March 5, 2011 perhaps best exemplifies these significant qualities crucial to Shakespeare plays. Directed by, Gary Griffin, the production is able to captivate the entire audience for the complete duration of the play through its brilliant illustration of spectacle as well as strong narration.

Don't use plagiarized sources. Get your custom essay on
“ A Classic Shakespearean Comedy ”
Get custom paper
NEW! smart matching with writer

However, the most significant factor of the production would undeniably be its inclusion of an alliance of narrative, dramatic, and spectacle elements all intertwined in the overall production. Griffin depicts a traditional Shakespearean comedy with the use of vivid set design and perfect actor selection in the production of As You Like It in a way that separates the comedic production from any other previous Shakespeare play I have seen. The production does so by being able to masterfully combine Shakespearean comedic elements with deeper connotations about self-identity and the power of love crucial to all productions of As You Like It.

The thematic elements prevalent throughout the production are contemporary in regards to all Shakespearean comedies in that the play revolves around mistaken identity, the many forms of love, and the resolutions of all misunderstandings in the end of the play. However, the way in which Griffin’s overall production is able to enthrall the audience through brilliant acting, audience inclusion, and beautiful theatre design in such a way that the audience isn’t forced to exert much personal imagination makes As You Like It a classic example of an ideal Shakespearean production.

The Chicago Shakespeare Theatre, the producing theatre for director Gary Griffin’s adaptation of As You Like It, is a professional theatre venue and company located on 800 East Grand Avenue in Navy Pier. The theatre is ornately designed with the intent to transform the audience’s connotation of setting and to make them believe/ give the appearance that they are in an actual Shakespearean Theatre without the use of their imagination. The theatre space used for the production of As You Like It is called Jentes Family Auditorium and features a total of 510 seats on three levels surrounding the courtyard theatre’s “thrust stage”.

This specific theatre was modeled/ designed with inspiration coming directly from the Royal Shakespeare Company’s Swan Theatre, evident at first glance, and thus creates an immediate intimate relationship between the actors, stage/ set design, and the entire audience seated around the three sides of the stage. While part of the set is elevated as a “stage”, the entire area/ space of the theatre is used by the actors throughout the production; when this is incorporated with the fact that no seat is more than thirty feet from the stage, a feeling of intimacy between actors and audience is ever-present.

For instance, the audience is engaged into the action of the play immediately by the way in which the stage extends through the middle of the first-floor seating allowing the appearance/ feeling of the actors walking directly out into the middle of the audience members. In an analysis of the overall production of As You Like It it is evident that even though the set, stage, and use of props and vivid images are riveting, the inclusion of an “all-star ensemble” of some of Chicago’s finest actors is truly the underlying nature in exemplifying the statement that the production is indeed Shakespeare’s “glorious romantic comedy”.

The actors play courtiers, clowns, philosophers, and locals all who are under the classic comedic spell of the trials and conquests of love as the main character, Rosalind, must disguise herself as a boy in order to escape the royal court. The characters, following Rosalind’s lead, venture into the timeless Forest of Arden where Rosalind finds herself trapped by love and mistaken identity in her attempt to teach the man she loves how to win the women of his dreams.

A traditional element present in the production of Shakespearean comedies such as As You Like It, is undeniably the inclusion of both a dominant and a secondary major female characters. The significance of the secondary female lead is often determined by the skill of the actress portraying that role. The actress can make the character seem somewhat mysterious and forgettable, as seen by the DePaul student’s portrayal of Hero in Much Ado About Nothing, or she can appear as significant and mesmerizing as the lead female. In Griffin’s production of As You Like It this notion of the importance of ctor/ character portrayals is illuminated.

For instance, one of the most memorable characters in the entire play is Cecilia, the secondary female character played by Chaon Cross. Cross is able to depict the comedic character almost perfectly through well-rounded acting and clear knowledge of Shakespearean language. In Cecilia’s character, Cross symbolizes a playful, charming, immensely loyal, witty and charismatic supporting female role. This is apparent in her juxtaposition of speech and comedic body language. Crucial plot and thematic elements of As You Like It are depicted by the actors as well.

For instance, the review on human life illustrated by the character Jaques, played by Ross Lehman in this production, is witnessed in Lehman’s acting skills in his performance as Jaques. He emphasizes the faults and ambitions of life in a funny and touching manner by offering both comedic and emotional moments for the audience throughout the play. There are many other characters in the production that portrayed memorable performances illuminating the underlying themes and comedic elements present in the correct use/ knowledge of Shakespearean language and acting.

These actors included:  Kate Fry as Rosalind, Matt Schwader as Orlando, Dennis Kelly as Adam, Phillip James Brannon as Touchstone, Matt DeCaro as Duke Frederick, Kevin Gudahl as Duke Senior, and Elizabeth Ledo as Phoebe. Each character possesses unique and intricately detailed costumes and character traits crucial to the understanding of the overall production. The costumes are vivid with detail and evoke the use of imagination and feeling that the audience is witnessing the action of the play within actual setting of certain scenes (whether the orchard, royal court, or forest).

The differences in characters’ personality, social class, and hierarchy alongside other characteristic elements are illuminated through the costumes intricate glamour and detail juxtaposed with a more simplistic but still vibrant use of props and set. In addition to individual actor performances, the Chicago Shakespeare Theatre’s production of As You Like It signifies the epitome of Shakespeare’s ’“glorious romantic comedy” through the use of a unique/ one of a kind setting. The set designs present are an attractive and ubstantial visual supplement to the action taking place on stage at every point throughout the progress of the play.

This can be perceived in almost every scene of the production but is most notably present in the opening scene, depicting a lush/ vivid apple orchard with minimalistic use of props, as well as the more luxurious forest setting that accompanies it. The scenery presented by lighting, sound, props hanging from the ceiling, and the perception of depth in the stage prominently adds to the attraction and understanding of the production.

The lighting and music of the production present in set/ scene changes enhances the plot developments as well as the overall journey and adventure portrayed in the play’s narrative nature. The set design of various different scenes is thus completely believable and enchanting; employing the audience’s complete inclusion into the imaginative world of the production. Alongside the appearance of setting in the various scenes, the intricately detailed costumes are exquisite and add a visually appealing aspect to the performances of the actors.

At the same time, the creativity and uniqueness of each character’s costume mandates the audience’s teleportation from the feeling of watching a traditional play to the feeling that they are in fact present in this magical/ timeless world of As You Like It. Overall, As You Like It, a production shown by the Chicago Shakespeare Theatre, is a professional and glamorous portrayal of traditional/ contemporary Shakespearean comedy. Every aspect of the theatre and production is employed into the narrative element of the play which makes this adaptation of As You Like It unlike any other theatre experience.

For instance, the elaborate theatre space is perfect for setting the mood of seeing a professional Shakespearean production and the way in which the stage is the center of vision no matter where you sit in the audience allows sound to travel in a surreal, surround sound manner only enhances this feeling. The actors’ use/ knowledge of Shakespearean language in conjunction with their use of space (entire theatre used as stage while most of the action is mere inches away from the first row of audience members) makes the production flow well while at the same time enhancing the professional feel of the production as well.

In this professional nature of the production nearly every aspect and element of Shakespearean comedy is exemplified. Through Gary Griffin’s production of As You Like It, the Chicago Shakespeare Theatre is able to directly exemplify the notion of ideal Shakespearean plays and why these plays still remain so popular and relevant in our society today even four hundred years later. 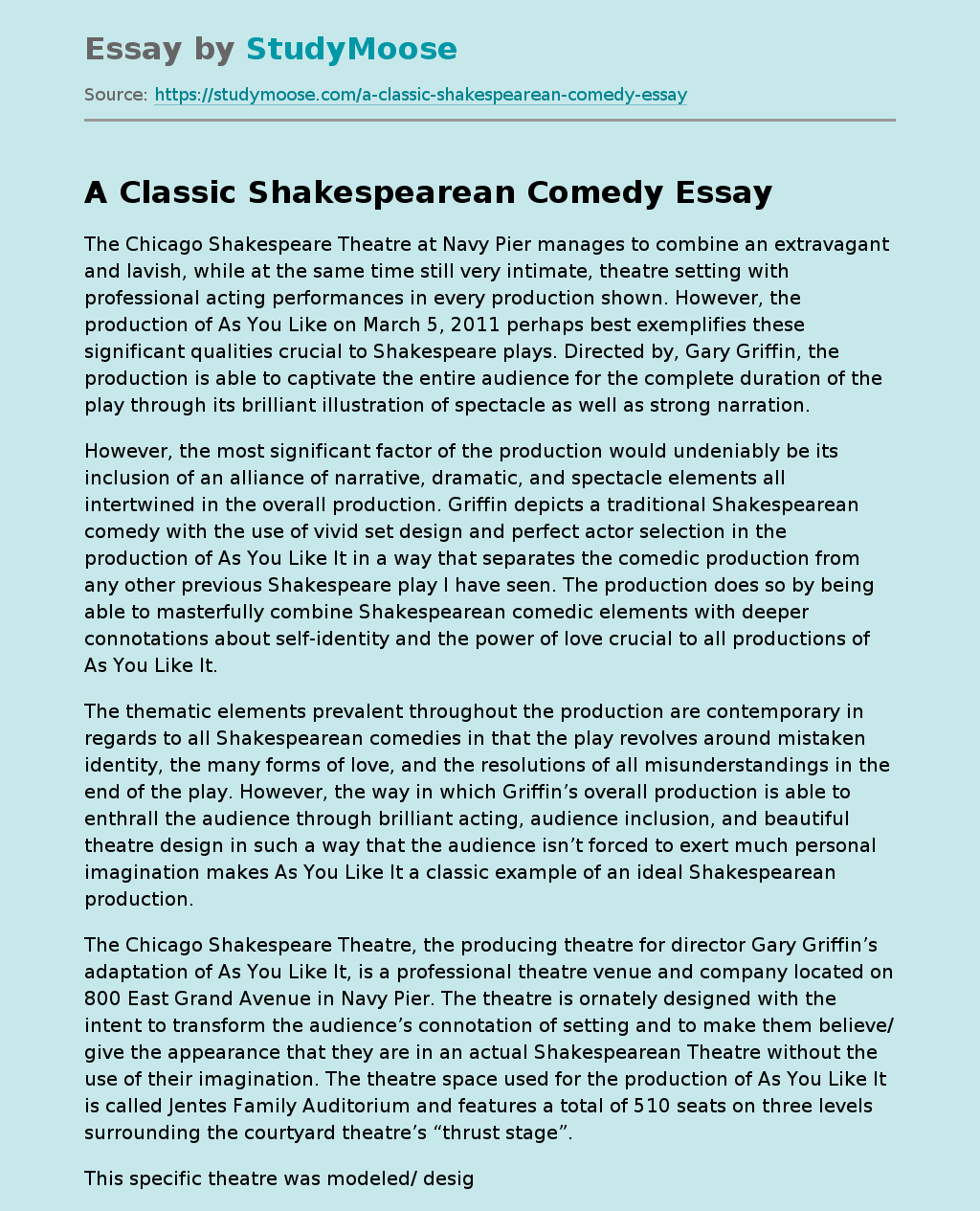