M.H. Abrams defined ‘comedy’ as ‘ a work in which materials are selected and managed primarily in order to interest, involve, and amuse us: the characters and their discomfitures engage our delighted attention rather than our profound concern. We feel confident that no great disaster will occur, and usually the action turns out happily for the chief characters. Abrams specifies several different types of comedy ‘within the broad spectrum of dramatic comedy’, including romantic comedy, satiric comedy, the comedy of manners, farce and ‘high’ and ‘low’ comedy.

Don't use plagiarized sources. Get your custom essay on
“ Nature of Shakespearean Comedy ”
Get custom paper
NEW! smart matching with writer

Much comedy, however- and this is particularly true of English works as opposed to the more genre-conscious productions of classical and French literature- is a mixture of many, if not all, these kinds. Verbal wit is often juxtaposed with the rough-and-tumble, physical action of farce, and characters drawn from the idealized world of romance with more familiar and realistically drawn figures from contemporary city and country life.

This is particularly true of Shakespearean comed.

Although plays like A Midsummer Night’s Dream, Much Ado About Nothing, As You Like It and Twelfth Night are usually classified as ‘romance comedies’- implying that their themes are love and courtship, their settings remote and exotic, and their plots drawn from tales of adventure which end with the conventional ‘they lived happily ever after’ typical of romance- they also contain farcical and realistic elements. The Shakespearean comedy which results from this combing and contrasting of multifarious elements gets the best of many worlds. One of the great pleasures afforded by a good production of a Shakespeare comedy is the sense of harmony in disharmony, of the collision between different worlds, different types of dramatic character and different aesthetic modes.

Shakespearean comedy flouts many conventions because the comic spirit, with its love for variety rather than uniformity, demands it. It encourages the making of witty distinctions between the ridiculous and the preposterous, the essentially worthwhile and the pretentiously hollow, which besides being in itself another form of entertainment also serves to sharpen the wits and heighten that discriminating intelligence on which a truly civilized awareness depends. disguise; but the sensitive woman in love is less completely suppresses than Rosalind thinks..

When Orlando says he must leave her for two hours, her “Alas, dear love, I cannot lack thee two hours’ (4.1. 163) has a suddenness, a brevity and spontaneity which contrast so markedly with the rest of her speeches in the immediate context that it is clear she is taken off guard, just as later when she faints on hearing from Oliver how Orlando has been wounded by the lioness(4.3.157). These chinks in her armour of disguise give a comical aspect to Rosalind’s character which invites us to laugh at her rather at what she is saying, or laugh with her at what she is doing; they are signals to us that even this most supremely self-aware of Shakespeare’s comic heroines can momentarily lose her self-control. Rosalind embodies Shakespeare’s anatomy of love in the play. Falling in love at first sight may be foolish where Phoebe is concerned, but it is perfectly acceptable for the quartet of courtly lovers, and Rosalind is the first to fall.

Sentimentalism is matter for mockery, but the ravings of Silvius nevertheless lead to Rosalind’s contemplating the arrow in her own heart. She can scold the lovesick shepherd for being made a “tame snake’ by love, but she is ready enough to weep when Orlando does not come on time. She is scornful of Orlando’s being late and reads him a lesson in how a lover should behave, but she herself has to learn a lesson in patience and discover, arch-manipulator though she is, that time and events, as well as her own emotions, are beyond her control. Rosalind’s love also has some of the fleshly sensuality of Touchstone’s, seen in her thinking of Orlando as the father of her child, and in her sexual repartee. The consummate glory of love, in Shakespeare always marriage, is Rosalind’s final triumph as, claiming magic powers, she organizes the wedding ceremony which ends the play.

To reach that end, to be a satisfying, as well as a satisfied, partner of Rosalind, Orlando needs to undergo an education- not the kind that he feels Oliver has deprived him of, for, after his unmannerly intrusion on Duke Senior and the exiled lords in 2,7, he quickly shows them he is ‘ inland bred’, that he is gentle by nature as well as by birth. His education is to be, like that of Silvius, Phoebe, Touchstone, Audrey, and Rosalind herself, concerned with love. His desire to carve Rosalind’s name on evertree is in fine romantic epic and pastoral style. However his verses are ridiculed with bawdy parody by Touchstone, his romantic description of his beloved gets a lewd response from Jacques, and Ganymede makes rude puns to him about cuckoldry; he is unaware of the first, his romantic idealism is proof against the second, but he is able to respond to the third, even if he loses the wit-combat.

He takes on Ganymede’s offer of being cured not because he wants to be cured of his love for Rosalind, but because he ‘would be talking to her’ (4.1.82-3). His romantic attitude is tempered only a little by his banter with Ganymede; his idea of marriage is for its lasting ‘for ever and a day’, and he finds Ganymede’s description of wifely behavior unlikely to apply to Rosalind. Extreme though this description is, it contains genuine warning that reality differs from the romantic ideal. What finally brings Orlando to a realistic view, however, is the maturity he gains through his decision to save Oliver, and then Oliver’s falling in love, and imminent marriage. ‘I can no longer live by thinking’, he tells the bawdily jesting Ganymede, who then drops the banter and begins the serious business of arranging the marriages and rebecoming Rosalind.

That Rosalind and Orlando’s love, full of comic complexities, lies between the pastoral extravagances of Silvius and the earthy pragmatism of Touchstone is neatly indicated in 2.4 when the besotted shepherd goes off crying ‘O Phoebe, Phoebe, Phoebe!’; Rosalind is reminded of her love, and Touchstone recalls, with a ribald innuendo, his love for the milkmaid Jnae Smile. Silvius and Phoebe are an example of any number of pastoral lovers and disdainful mistresses, like Spenser’s Colin Clout and his Rosalind, who ‘deigns not {his} good will, but doth reprove’ ( Shepheardes Calender, I ,63); the artificiality of their relationship is expresses not only through their language, but by the way in which Shakespeare distances them, making them actors in a pageant, and Silvius the exemplar of Jacque’s lover ‘sighing a furnace’. Rosalind’s realistic, rattling speech contrasts roughly with theirs, tumbling over the edge of verse into prose, her scolding a turbulent comic centre to the anguished plea of Silvius and the balanced casuistries of Phoebe.

In 5.2 Rosalind takes part in the litany by which Silvius explains his idea of love- a version still as extreme, idealistic, and romantic as at first- but sensible realism takes over and she dismisses it in annoyance as ‘like the howling of Irish wolves against the moon’ (II. 104-5) so that she can get on with the main business, the weddings. At the last Silvius has nothing to say, only Phoebe, who surrenders her love for Ganymede, in a couplet when Rosalind appears as herself. The hieratic quality which the dialogue has now taken on can accommodate such formal artificiality, but the reality beneath the artificial expression of Silvius and Phoebe during the play is characteristically defined by Jaques when in handing out his bequests at the end he leaves to Silvius ‘ a long and well-deserved bed’: Silvius’s pale-faced languishing have the same essential sexual basis as Rosalind’s love and Touchstone’s desires. 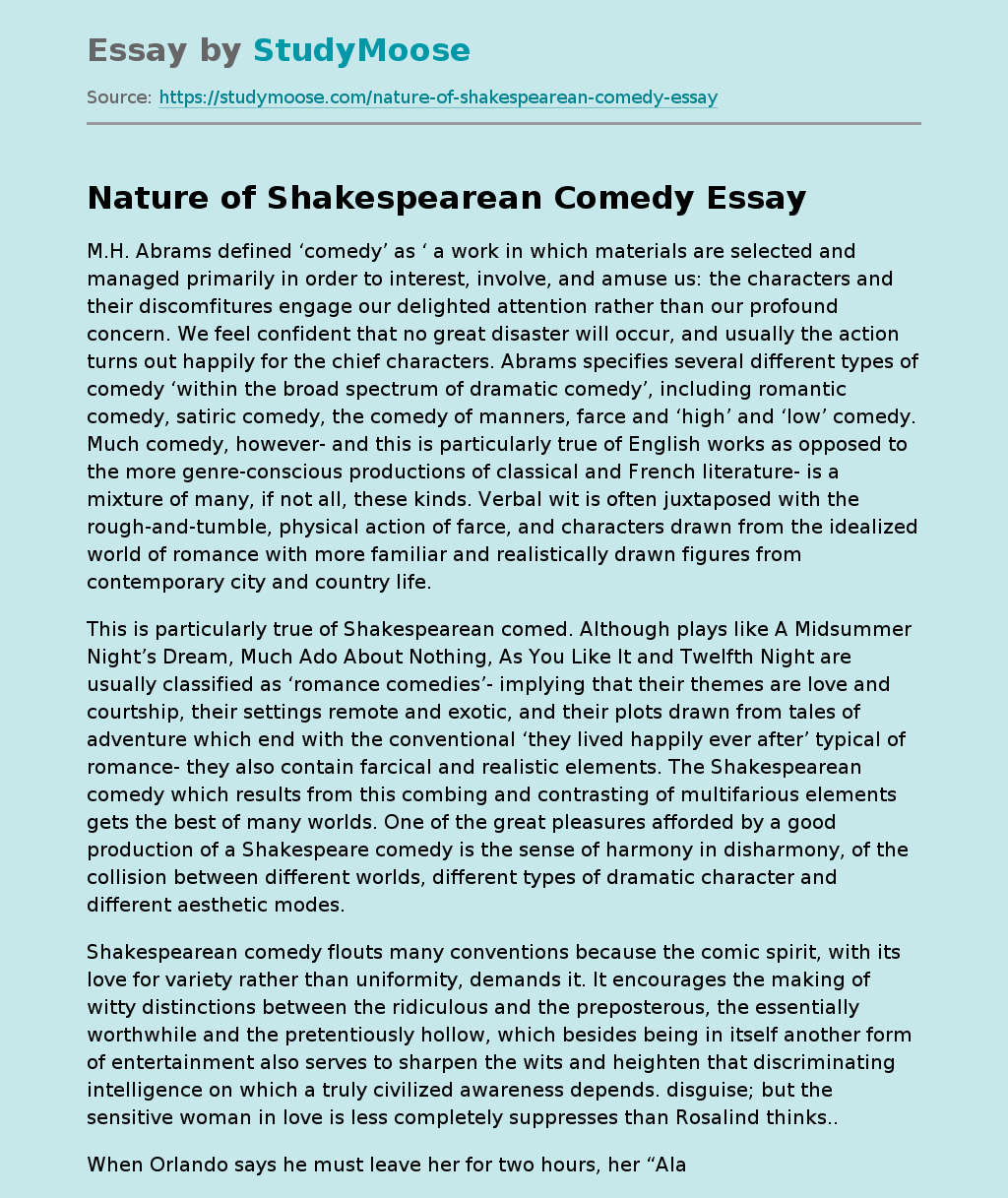