Present British society is certainly more child centred than it ever was. Some may argue Britain is a totally child centred society focusing on the needs and protection of children. However this hasn’t always been the case, back to as recent as just before the 20th century children were regarded as ‘little adults’ who could be hanged or punished for crimes, work and behave just the same as adults.

However there was a major change in attitudes starting with the 1870 education act giving children from the ages 5-13 an opportunity for education.

Don't use plagiarized sources.
Get Your Custom Essay on A child centred society Just from $13,9/Page

As the ‘little adults’ were now attending school rather than being an economic asset to the family-by going out to work- they became a financial responsibility, more of an investment for the parents, a view reinforced by recent statistics showing an average child costs i?? 155. 60 a week in the UK.

Other social policies devised by the government include the factory acts such as the factory and workshop act of 1901 raising minimum working age to 12 and then consequently up to 16.

the 1889 prevention of cruelty to children act was another policy, all these with the combination of recent laws restricting the use of drugs, alcohol, smoking and sex to for under 16s and 18s have sent out the message that children were not the same as adults, needed to be treated differently and above all needed protection.

These, along with welfare provisions such as social services, child benefits and higher standard of living and medical knowledge ensure better attachment to the children have led to a massive change of attitude where the difference between children and adults is concerned, and ensure children stay healthy and safe being protected. However some may argue that Britain is far from being the rosy happy child centred society it may be portrayed as, Neil Postmans view is that if Britain was indeed a completely child centered society there would be no threat to children whatsoever.

This is no the case with 17,727 cases of sexual crimes against children being reported in 2010/11 within England and whales. Along with 1 in 9 young adults reporting experiences of physical violence committed by adults in there childhood means although the majority of children are protected its not all. Neil Postman also argues childhood is disappearing due to the increasing integration of children and adults life accessed via the media, exposing children to adult issues and behaviour through tv programmes such as soaps are bringing the lives of children and adults closer.

This is also reflected in the increasing similarity of dress ode between young children and their adult counterparts. To conclude I would say Britain is, at the moment mainly a child centered society, we do not have an economy dependant by 20% on children unlike India so it is definitely better than most. However it cannot be said that Britain is totally a child centered society although it has improved greatly not all children do experience the protection they needed and do come across violence and abuse in their childhood. 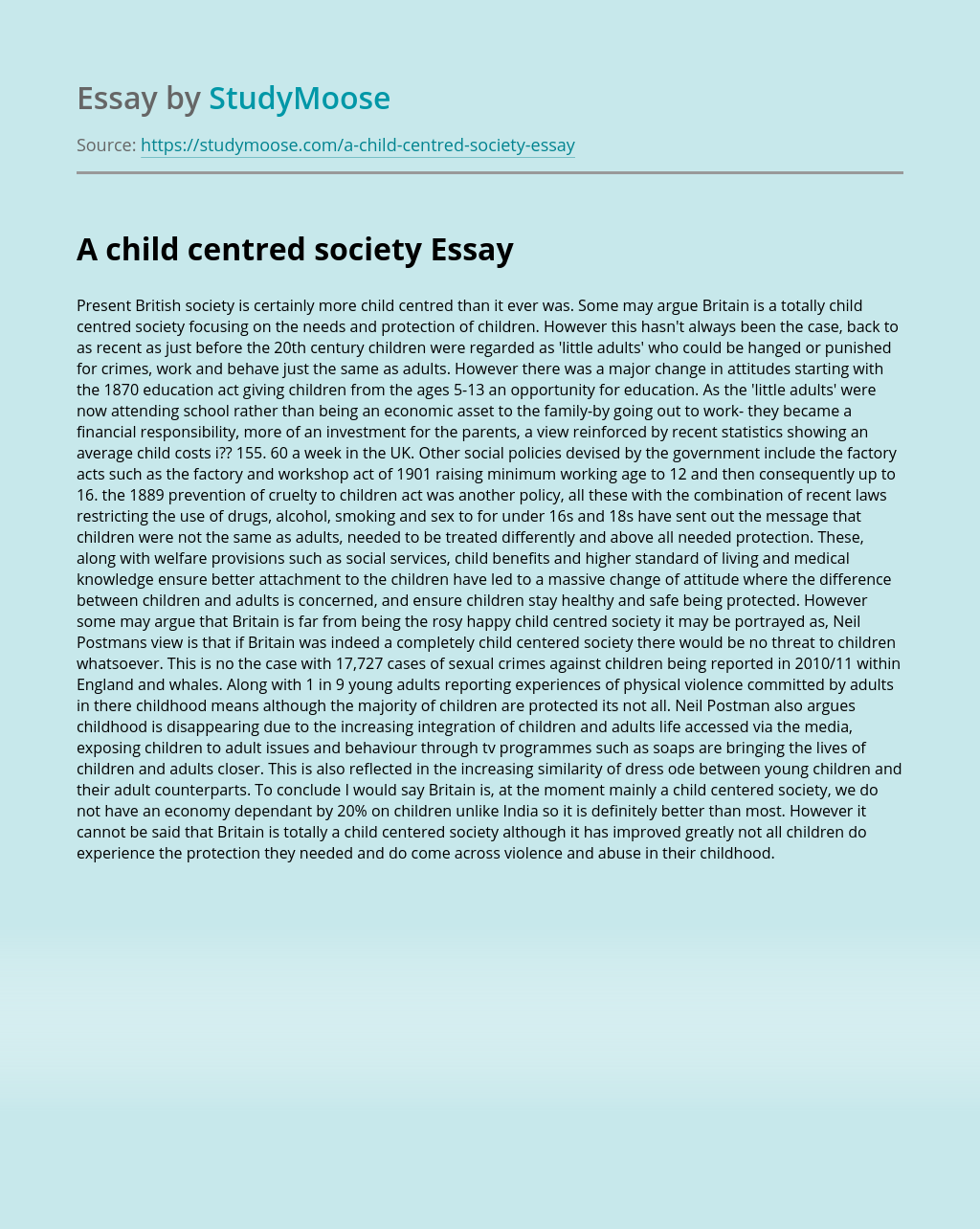 The Montessori method of education is one of the very unusual approaches of educating young children that has been based on the experiences and research of educator and physician Maria Montessori (1870–1952). The method basically arose from what Dr. Montessori’s discovered and named it the “the child’s normal nature” back in 1907 (Montessori, 1972). This...

Safeguarding the Welfare of Children and Young People

This pack is designed to support you in producing evidence for your qualification. You can either complete the sheets enclosed or create your own way of presenting your evidence. Outcome 1 1.1) Identify the current legislation, guidelines, policies and procedures for safeguarding the welfare of children and young people including e-safety. 1.2) Describe the roles...