Youth violence in the United States is a major social problem that will inevitably get worse. Criminologists and state authorities are more concerned on the issue of youth violence than adult violence because the crimes involving the youth are becoming more violent and are continuously increasing the number of juvenile offenders (Zimring, 1998, xi). During the mid 1990s, the increasing rate of violence involving the youth alarmed state authorities that committee hearings in the Congress had been scheduled for it.

In one of the hearings, Representative Bill McCollum said that “even though there is a decline in rates of violence, the increasing rate of violent crimes by young offenders are alarming” (cited in Zimring, 1998, xi) In a report published by the Office of the Juvenile Justice and Prevention Program of the U.

Don't use plagiarized sources. Get your custom essay on
“ Youth Violence ”
Get custom paper
NEW! smart matching with writer

In this year alone, almost one of very eight crimes recorded in the United States are committed by juvenile offenders (Snyder, 2008).

Zimring (1998) believes that the lenient treatment on juvenile delinquents and crimes involving the youth in the 1980s may have been contributed to its increase in the 1990s.

(p. 7) There are already numerous studies and researches done to study the reasons behind such antisocial behavior of the youth. Prothrow-Stith & Spivak (2004) believes that the cycle of violence usually starts at home (p. 49). Youths who witnessed violence at home when they were still a child, are most likely to commit a criminal offense upon reaching the puberty stage.

There are also numerous factors that are most likely related to youth violence, such as: alcohol, binge drinking and drug abuse; media hype and cultural norms that patronize or promote violence in the society; vulnerability of young persons, particularly adolescents; racial discrimination; poverty; and violent or not unfriendly family background (Prothrow-Stith & Spivak, 2004, p. 49). Now, the challenge among state authorities is to conduct effective prevention programs on the issue.

Counselors and psychiatrists believe that prevention program is more effective than having a stricter juvenile justice system. Prothrow-Stith & Spivak (2004) challenge the people concerned in the prevention of youth violence to actually confront the status quo and the whole juvenile justice system (p. 227). Professionals that are usually working with juvenile offenders should be trained on how to understand the illnesses, sufferings and offenses of the offenders rather than just reacting on actual cases.

Most programs funded by state agencies available for the youth are usually for the treatment of the problems encountered by them, rather than helping the youth to prevent and handle it. Millions of public funds have been spent on persecuting and incarcerating offenders but minimal funds have been allocated into stopping the current problem of adolescent people getting involved in illicit and violent behaviors (Prothrow-Stith & Spivak, 2004, p. 230).

Youth violence is undeniably a national issue to that needs to be addressed. The resolution of this issue however is not only an area of concern of state authorities, but also a collective conscious effort of sectors that should be involved such as the family, media, school authorities and even the youth themselves. Only with the proper understanding and analysis on the problem that will ensure the resolution of it. References Noonan, J. J & Vavra, M. C. (2007, October) Crime in Schools and Colleges: A Study of 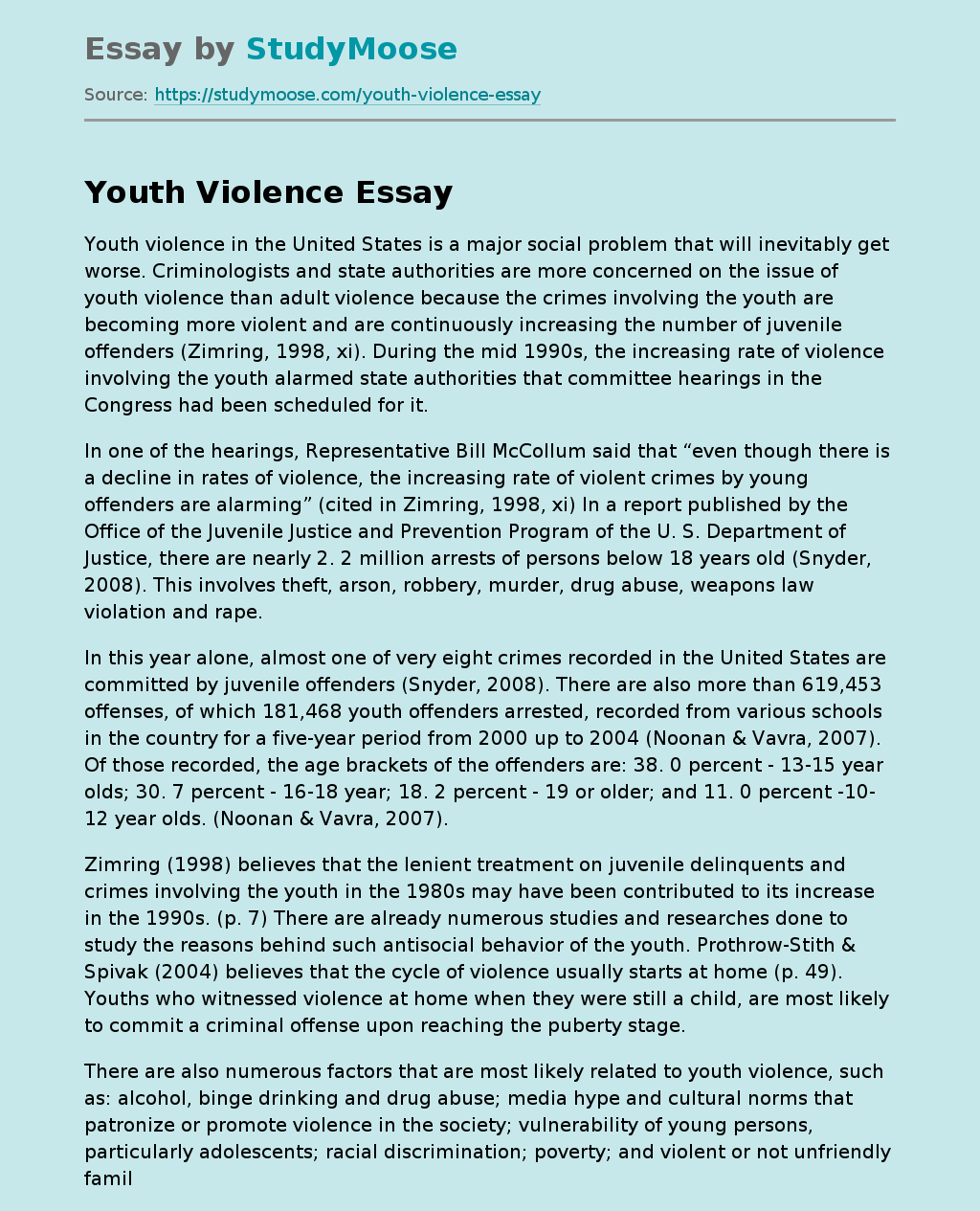