1. The two main settings in “Young Goodman Brown” are the forest and the colonial village of Salem, Massachusetts. The two different times of the setting are very important to the symbolization of the story. In the beginning of the story, Goodman Brown sets out on his journey at sunset; to set out at sunset it symbolized darkness, which in turn symbolizes evil. This presets the tone of the story.

In the end when he is returning home, the time changes and it is daylight, and this symbolized innocence and a sort freedom from the terror he had just experienced.

2. The first seven paragraphs reveal that Goodman Brown and Faith have been only married for 3 months; making them newlyweds. Faith is young, beautiful, and trusting, and Goodman Brown sees her as the embodiment of virtue. They both love and care for each other and they show their belief in god by kissing each other goodbye. It also shows that they have a strong relationship filled with love and trust.

3. Brown’s meeting with the unnamed man was actually pre-arranged because in the story when he goes in the woods the man comes upon the road and greets Goodman Brown. He tells him he’s late and greets him as though he had been expecting him. Also, Brown says that he showed up for the meeting because he promised to do so, but does not wish to touch the staff and wants to return to the village. Before leaving for the forest Goodman Brown believed in the goodness of his father and grandfather, but the old man, tells him that he knew them both.

4. When Brown is about to go back home he and the old man come upon an old woman, named Goody Cloyse a well respected man from the village. She identifies the old man as the devil and reveals herself to be a witch, on her way to the devil’s evil forest ceremony. Despite this, Goodman Brown tells him he intends to turn back home because he frets for his wife’s safety.

5. Goodman Brown clings to his wife, Faith, when he questions the goodness of the people around him, he assured himself that if his wife has remained good, then his own faith is worth fighting temptation from what seems to be the Devil. Brown believes that Faith is pure and good. When Brown exclaims “My Faith is gone!” he is trying to say that all that was holy to him (his wife) and that was good was gone because his wife was participating in the devil ceremony. When he sees that Faith has been corrupted, he believes that everyone in his surrounding is evil. This reveals Goodman Brown’s lack of true religion; this shows that any good Christian can be turned easily into the dark side.

6. In the altar scene, Brown recognizes several community members such as the minister of the church, Goody Cloyse, and Deacon Gookin. They are all said to be going to the devil ceremony, because they are followers of him.

7. The forest scene ends when Brown sees Faith’s pink ribbon. He takes the staff to go to the ceremony, soon finds himself in weird circumstances, he sees people whom he thought were very good, religious, well respected, people in his community to actually be devil followers. The newest converts are brought forth—Goodman Brown and Faith. Brown’s religious beliefs is are rooted in his belief that those around him are also religious. This show’s how weak Brown’s faith really was, because when you start depending on other’s people’s views of religion, your own faith is also dependant on others, making it really weak. When Goodman Brown discovers that his father, grandfather, Goody Cloyse, the minister, , and most importantly Faith are all following the devil, Goodman Brown decides that he might as well do the same since everyone has turned to evil. This shows the puritan corruptibility of religion.

8. Whether Goodman Brown’s experiences were real or dreamt could be interpreted either way. The way the beginning starts so abruptly could easily lead you to belive that it was a dream. When the wife, says fretful for his well being and she mentions having bad dreams it could have been a clue from Hawthorne. Also Hawthorne, didn’t explain why Goodman Brown was entering a forest all of the sudden, and how he has come to be acquainted with the devil. These sudden events are a typical setting of a dream, because a dream doesn’t have to make sense. Regardless of whether it was a dream or not it doesn’t change what happened in the story. Goodman Brown’s new point of view and decisions are still the same either way. Hawthorne left this question open to the readers because it didn’t make a difference to what happened to Goodman Brown. He would still think and act the same way he would if he was dreaming or awake.

9. No, because whether his dream was real or dreamt it doesn’t make a difference because it wouldn’t of change his decisions, actions, and loss of faith all throughout the story. He had a choice to go with evil or to stay true to his religion even though everyone else around him went with evil. Brown didn’t choose to do the right thing, and, that shows just how week his faith really was, how gullible he was, and how he didn’t have a mind of his own, because he based his belief on other people. 11. Hawthorne is trying to reveal in this story the Puritan Hypocrisy in that era. The characters Goody Cloyse, Deacon Gookin, the minister, Faith, and Brown himself typify hypocrisy.

Hawthorne is trying to say that even the most pious and noble are actually sinners. For instance, Goody Cloyse was a well respected woman in the town, who taught kids in the church, but she turned out to be a witch who helped the devil. “…Anointing with juice of small-age and the fat of a new born babe” leads the reader to belief that she offers little babies as sacrifices to the devil. This hypocrisy makes Brown second guess everything he once strongly believed in. The writer tries to reveal he thinks is the cause of the corruptibility which is the society’s emphasis on what he sees as the corruptibility that results from Puritan society’s stress on public morality, leading to the weakness of private religious faith. 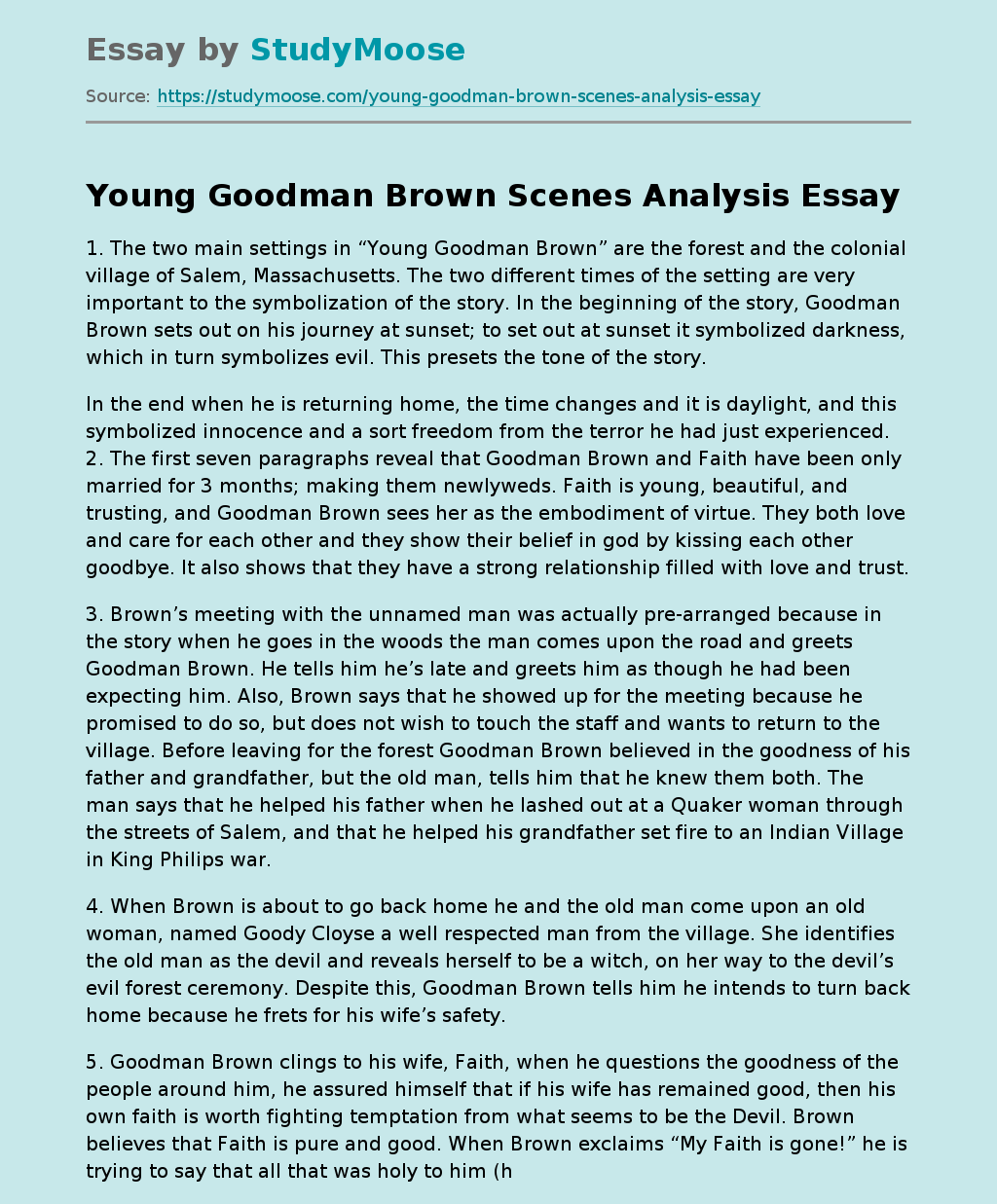